Koepka Back (Again) And Trying To Salvage Lost Year 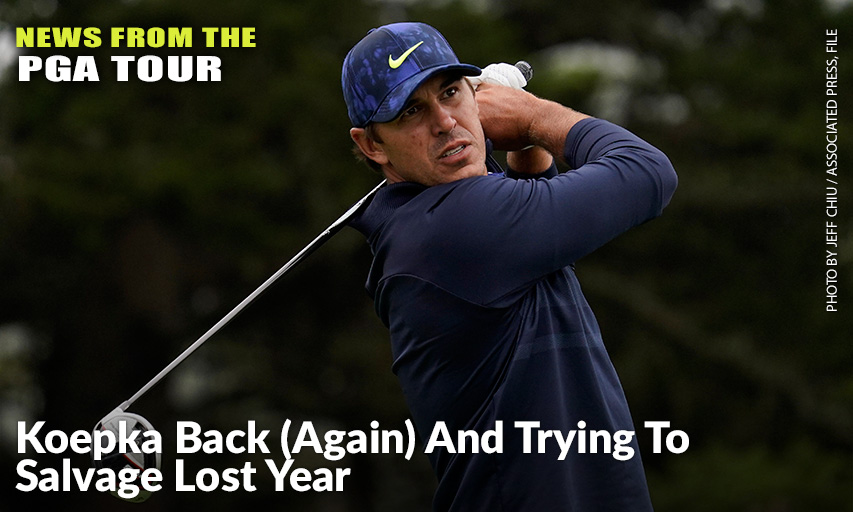 For the third time this year.

And yes, it’s a phrase he’s getting tired of hearing.

“Hopefully, that won’t happen again,” Koepka said Tuesday at the CJ Cup at Shadow Creek, the very tournament where last year — in a much different location — he re-injured his left knee and began what has become a lost year.

Koepka was a major champion for the third straight year, No. 1 in the world without argument and the defending champion at the CJ Cup in South Korea last October. Walking off the third tee in the second round, he slipped on a wet slab of concrete, landed awkwardly trying to brace himself and tore a tendon in the middle of his left patella.

He missed three months, including the Presidents Cup, and returned in the Middle East in January. Five tournaments later, the COVID-19 pandemic shut down golf for three months.

When he returned from that, he was so far behind in the FedEx Cup that he played eight times in 10 weeks. Issues with the knee fed into his left hip, and while he barely made it into the PGA Tour’s postseason, he couldn’t keep going.

He withdrew at the TPC Boston and had a cortisone shot for his hip. During his two months away, which included missing the U.S. Open, he had more stem cell treatment on his left knee.

And here he is again, healthy and hopeful.

He said he feels “a million times better” than when he returned at Abu Dhabi and Saudi Arabia in late January.

“I didn’t know how bad I felt until I actually feel good,” he said. “It’s nice to be back.”

Koepka has been coping with injuries since he first joined the PGA Tour six years ago. He went a month without playing because of an ankle injury in 2016, came back at the PGA Championship and tied for fourth on a 36-hole Sunday that effectively wrapped up a spot in the Ryder Cup.

A wrist injury knocked him out of the Masters in 2018, and he came back to win two majors. Before the slip in South Korea, the knee was aggravating him so much in 2019 he rarely practiced. That was the year he won the PGA Championship and was runner-up in the Masters and U.S. Open.

But he said problems with the knee eventually fed into the hip as he was making compensations to get through on his left side. He says he suffered a partial tear of the labrum in his left hip at Harding Park during the PGA Championship, where he went into the final round two shots out of the lead and stumbled to a 74.

Koepka doesn’t like making excuses, but he didn’t mince words when asked about his performance this year.

“It’s the whole reason I played like crap,” he said.

The world ranking would suggest it’s a lost year. Koepka started the year at No. 1 and became the fourth player since the ranking began in 1986 to start at No. 1 and fall out of the top 10. The others were Greg Norman in 1998 (shoulder surgery), Tiger Woods in 2014 (back surgery) and Jason Day in 2017.

Koepka, now at No. 11, is only looking forward.

“I don’t feel like I’ve lost anything,” he said. “I feel good now, so I’m just pleased to finally feel good. Still got a couple events, and then Augusta. The year’s not over.”

Expectations haven’t changed for Koepka, whose last victory was the FedEx St. Jude Invitational in August 2019, where he chased down Rory McIlroy only for McIlroy to return the favor a month later at East Lake to win the FedEx Cup and get the players’ vote as PGA Tour player of the year.

He said he feels good enough to walk four rounds, so there’s no reason he should set the bar any lower than winning at Shadow Creek.

But there’s still concern. He said he hasn’t felt any pain since the cortisone shot in Boston two months ago.

“If the cortisone doesn’t work and it actually gets worse, it will be surgery and you’re out for nine months,” he said. “But everything feels good. We’re doing all of the strengthening in all of the right places. It’s the best I’ve truly felt in so long.”

He is taking off the next two weeks to get more work done in San Diego, where his trainer lives. And then he’s headed to the Houston Open the week before the Masters.

There isn’t much time to salvage the year, but at least there’s time. And he has his health, at least for now.

That’s all Koepka wants at this stage.