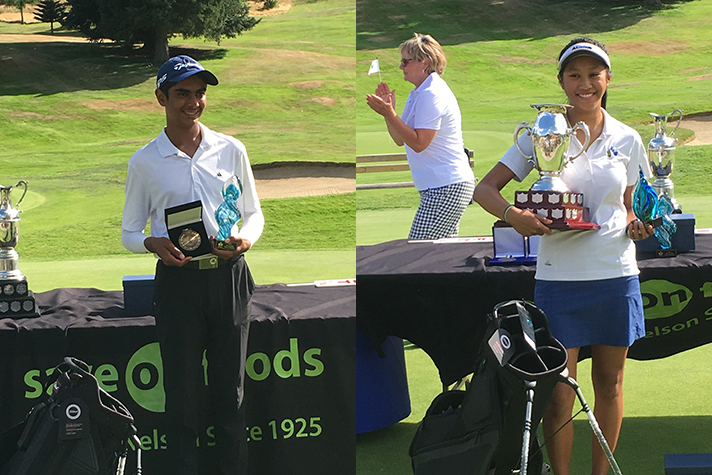 (Brad Ziemer/British Columbia Golf) — Both went wire to wire and both won big. Jeevan Sihota of Victoria and Claire Lovan of Surrey simply dominated their competition at the B.C. Juvenile Championships at Granite Pointe Golf Club in Nelson.

The 13-year-old Sihota won the boys’ title by 11 shots, while Lovan, 15, took the girls’ championship by eight strokes. Everyone else was playing for second place.

On a windy day in Nelson, Sihota closed with a two-over 74 to finish the 54-hole event at seven-under par. North Vancouver’s Finn Lawlor finished second at four-over par after firing a three-over 75. Lovan shot a two-over 76 and finished the tourney at two-over. Karen Zhang of Richmond was second at 10-over after firing an 80 on the final day.

The Juvenile Championships were open to players 16 and under as of Aug. 1. Sihota’s margin of victory would have been even larger if not for a hiccup early on his back nine Friday.

He tripled-bogeyed the par 4 11th hole and followed that up with a double on the par 4 12th. “I had such a big lead, it was hot and it’s a tough walk here as well,” Sihota said. “I kind of lost a bit of focus and hit a couple of bad shots. That was very disappointing but I am glad I got the job done.”

Sihota rebounded to finish with back-to-back birdies on the 17th and 18th holes, which are both par 5s. “I was happy to finish that way,” he said. “I played solid all week other than those two holes.”
Sihota, who plays out of Gorge Vale Golf Club in Victoria, was 11-under par on the par 5s at Granite Pointe during his three rounds.

“I could reach three of the four in two,” he said. “I played them really good today, not so good yesterday and I birdied all four the first day. That was definitely one of the goals this week. It’s a shorter course than what I normally play and obviously the par 5s are the scoring holes.” He eagled the par 5 fifth hole after hitting his five-iron approach shot to within eight feet of the hole.

Sihota said a steady wind made conditions Friday the toughest of the week at Granite Pointe. “It was quite windy today,” he said. “Especially coming down the stretch, it was getting confusing. There was a one or one-and-a-half club wind most of the day.” Matt Hopley of Kelowna and Leo Harper of Burnaby tied for third at seven-over par.

This is Sihota’s first provincial title, but the soon-to-be Grade 8 student already has three world junior titles to his credit. They were won at the ages of six, eight and 12 at U.S. Kids World Championship and Junior World competitions in Pinehurst, N.C., and San Diego.

Sihota will be moving on to Christina Lake Golf Club where he will compete at the B.C. Bantam Boys Championship for players 14 and under. That 36-hole event begins Monday.

Lovan, who plays out of Eaglequest-Coyote Creek in Surrey, also finished her round with a birdie. She began the day with a four-shot cushion and by the end of the day had doubled it. Her round included three birdies, three bogeys and one double.

This is Lovan’s first provincial title and comes about a month after she finished second at the Future Links Western Championship in Fernie. She was also runner-up at the last year’s B.C. Bantam Girls Championship at Bowen Island Golf Club. Akari Hayashi of Victoria finished third at 12-over par.

CHIP SHOTS: Sihota and partner Ethan Posthumus of Coquitlam won the two-man best-ball competition with a score of 20-under par. That was four shots better than runners-up Cole Wilson and Hopley of Kelowna. Posthumus had the day’s best score, a two-under 70, on Friday.