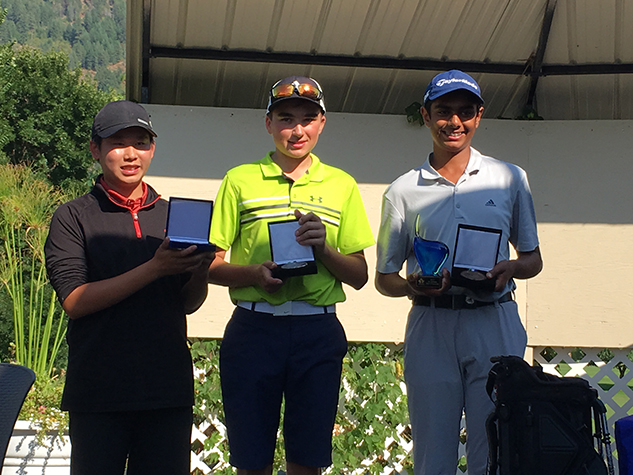 (Brad Ziemer/British Columbia Golf) — Victoria’s Jeevan Sihota claimed his second provincial championship in less than a week Tuesday. This one wasn’t nearly as easy as the first.

The 13-year-old played a near perfect round Tuesday and it turned out he had to. His second straight four-under 68 at Christina Lake Golf Club gave him a one-shot win at the B.C. Bantam Boys Championship over Burnaby’s Leo Harper. Tuesday’s win followed a convincing 11-shot victory at last week’s B.C. Juvenile Boys Championship at Granite Pointe Golf Club in Nelson.

“It was kind of like match play at the end,” Sihota said after his round Tuesday. “Leo played fantastic as well. I just got him by one.” The Bantam championship is open to players aged 14 and under as of August 1st.

Sihota, who plays out of Gorge Vale Golf Club, had vowed to play more conservatively on Tuesday after hitting a couple of drives into the trees on Monday. That strategy seemed to work. “I played a lot smarter today,” he said. “I was bogey-free today and birdied all the par 5s. I hit a bunch of great putts and they didn’t all drop. I could have been a lot lower today.”

Sihota could not shake Harper, who took the lead early in their final round when he went 3-under through his first five holes. “After the ninth hole we were tied again,” Sihota said. “I took a one-shot lead on 11, he birdied 14, so we were tied again, and I birdied 15. And I parred 16, 17 and 18 to win by one.”

One of the only mistakes Sihota made all day came on the 18th hole when his tee shot went right and into some trees. He played a remarkable second shot from about 140 yards that allowed him to save par and win the tournament. “I didn’t have much of a shot except for a low slice,” Sihota said. “I hit a low slice with a 3-iron. I just tried to bunt it and slice it at the same time. It ran right up there perfectly and I made a solid two-putt.”

Harper, a Burnaby resident who turned 15 on Monday and plays out of Pitt Meadows Golf Course, had a putt for birdie on the 18th green to force a playoff. “Leo had a putt to tie from about 25 feet and he left it right in the heart,” Sihota said.

The win capped an impressive season for Sihota, who is only entering Grade 8. It began back in May when he won the Future Links Pacific Championship at Chilliwack Golf Club. That tournament’s field included many of Western Canada’s top junior golfers.

“This is by far the best year I have ever had,” Sihota said. “It feels awesome, especially this week. I was really able to stay in the zone and I was bogey-free today and really solid. The main thing is what I shoot and a couple of 4-unders, I am pretty happy with that.”

Brycen Ko of Richmond, who shot an even-par 72 on Tuesday, finished third at 3-under par. Bill Xu and Markus Yiu, both of Vancouver, tied for fourth place at even-par.