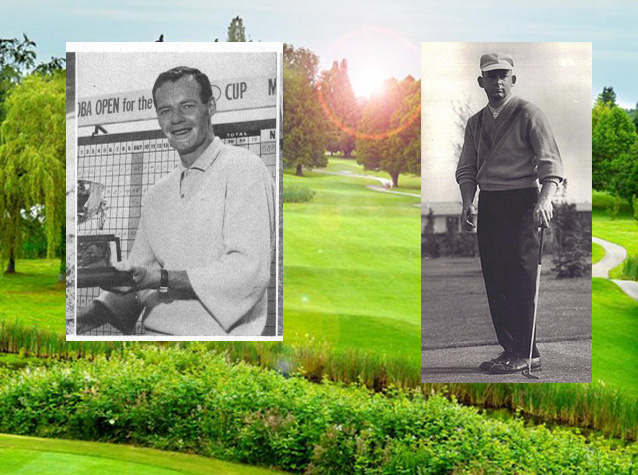 British Columbia Golfing Legends Alvie Thompson (L) And John Russell (R) Will Be Remembered Always For Both Their Skill And Grace In The Game Of Golf. (Photo/BC Golf House)

Golf in British Columbia has a very rich history and our province has had no shortage of outstanding players over the years both at the amateur and professional level.

Recently the golf community as a whole, and here in British Columbia in particular, has been saddened by the loss of a few of those legendary players with two of them leaving us very close together at the end of October and early in November.

As a tribute to those two fine gentlemen we’d like to present here an overview of the accomplishments and contributions to the game by Alvie Thompson and John Russell. Our game and our community are better for having had them here and being able to call them our own.

Thompson was an accomplished player as weli. As a Marine Drive junior member Alvie Thompson honed his skills watching the legendary Stan Leonard pound the ball on the course range. “From the time I was 15 I saw almost every practice shot Stan ever hit at Marine. Nobody ever hit the ball any better than he did. It was his encouragement that got me going,” said Thompson.

When Stan left for the tour he arranged for the 21-year old Alive to commence his apprenticeship in Bill Thompson’s pro shop. Alvie got his playing career really under way in 1962, two years after he left BC to join Bill Mawhinney’s staff in the east. Playing in his first national championship Alive, the pupil, shot 64 to defeat Stan and George Knudson in a play-off to capture the 1962 Canadian Professional Golfer’s Association Championship. The following year he burned the course in 27-under par to capture the Miller Cup Match Play Event.

In the decade playing the Canadian Tour, the Caribbean Tour and the PGA TOUR, Alive recorded 7 wins and 8 seconds. Alvie’s big break seemed to come in 1968 when he finished 10th at the PGA qualifying school. H played the fall tour winning $700 at Hartford, $1000 at Doral, and $550 at Orlando. A group of Toronto businessmen decided to sponsor Alive full time on the tour the following year. “I was on top of the world,” he said. Then for some reason his tour card was cancelled. Several inquiries never really solved the problem so Alvie decided to concentrate his energy playing Canadian Tour golf.

In 1972 after playing the Alberta Open Alvie decided to return to his roots – the head professional job at his home club Marine Drive.

Thompson’s legacy in BC continues through the many Golf Professionals who looked up to him early in their careers. Much in the way Leonard was a major influence on him, Thompson passed on his knowledge and expertise to several esteemed PGA of BC Professionals, including Jim Pringle, Mike Smedstad, Norm Jackson, Derek Thornley, Pat Dunn and others. He also had a major impact on the playing career of Richard Zokol, who was a junior at Marine Drive while Thompson was the club’s Head Professional.

Growing up in the Vancouver suburb of Kerrisdale, Russell attended Magee High School and graduated as a Mechanical Engineer from UBC. As a small 5'9'' University of British Columbia Engineering student, John Russell decided early a change in sports was necessary.

John reminisced during his interview for the BC Golf Hall of Fame Induction dinner that, "I was heavily into basketball at Magee and when I got to UBC I could see myself, a five foot nine guard, parked on the bench. That's when I decided to try an individual sport. A lot of my buddies thought I was a wimp for choosing golf," he said.

His brother, Charlie, enjoyed telling about John's first round at Langara Golf Links. "John was just along for the walk and with no one pressing us, I convinced John to try a few shots when we got to the fifth hole. I had a Stan Leonard Pro-Made wood. John hit a fair drive, drilled a three iron, and then topped an eight iron. The ball rolled on to the green. Then, he sank the putt for a birdie. John's response: Was that any good?"

To recognize John's brilliant year in 1967, the Royal Canadian Golf Association named him to Canada's 1967 America's Cup. The RCGA press release stated: "John Russell, a manufacturer's agent and graduate in Engineering from the University of British Columbia has had his best year in golf during 1967. He won the BC Men's Amateur Championship, the BC Invitational Championship, and the Vancouver & District Championship. He sparked BC's come-from-behind victory in the Willingdon Cup Matches recently played at the Royal Colwood G&CC in Victoria, BC. With his success he is rated as the #1 men's amateur golfer in BC for 1967."

For the three-country America's Cup competition, teams from Canada, the U.S., and Mexico competed over the Guadalajara Country Club in Guadalajara, Mexico. John won two out of three of his matches.

The fifteen-time Point Grey G&CC club champion beat Don Gardner in the final to win the 1966 City Match play title. John captured the BC Men's Amateur Championships and the Vancouver & District Championships in 1967 and 1968.

John Russell commented about the marathon week and the key to his win. "Gorge was a tough course and it took me a while to figure it out. The greens demand firm putting and the most important thing there was in club selection. It took me three rounds to figure it out." After John's victory, Art Donaldson, John's opponent, commented "John had all the shots when he needed them. I got careless on a few shots and no one beats John Russell unless he is playing his best."

At his 2005 Golf Hall of Fame Induction Ceremony, John commented; "My goal to win more championships after 1969 came to an end when my eighteen-year old neighbour, Doug Roxburgh, appeared in the men's championships."

John Russell will be sorely missed on the local golfing scene. He represented the best aspects of a golfing gentleman.

With contributions from Mike Riste (BC Golf House) and The PGA of BC.