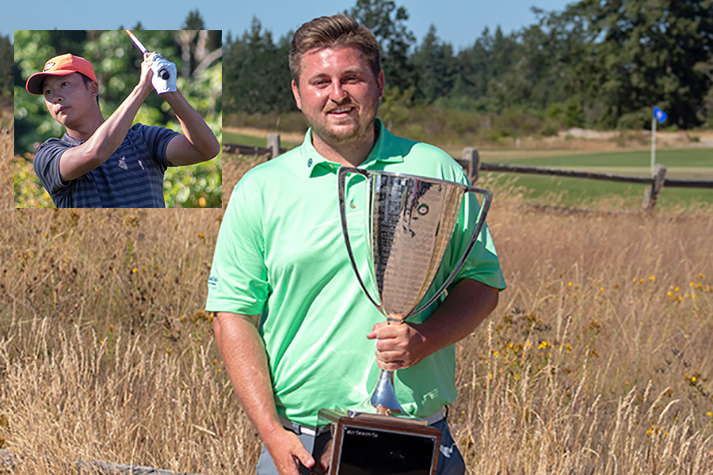 In the tight pressure-packed match, Baldridge never trailed. He won the first hole with a par, and was able to go 2-up a couple of times during the day, but Yu continually came back. Yu birdied the long par-4 13th hole in their afternoon round (their 31st hole in the match) to square the match up, but three holes later, the long-hitting Baldridge birdied the par-5 16th (34th hole of the match) to go 1-up.

On their 36th hole, a 452-yard par-4, Yu, needing to win the hole to extend the match, pulled his tee shot left nearly out of bounds. He pitched out, leaving 100 yards to the flag. His third shot still didn’t find the green, and Baldridge easily parred the hole to close out the match.

“It was a long day,” Baldridge said after the match. “Trevor and I were really battling. I was lucky to have never given up the lead (throughout the match), but Trevor and I both gave each other a ton of holes; I think we were both upset about some of the holes we gave each other, but it all kind of balanced out.”

Baldridge had a makeable birdie putt on the 35th hole to close out the match, but couldn’t convert it. “I couldn’t get that putt to drop, and we went to 36 and I was able to close it out. Trevor is a great player, and I’ve got a lot of respect for his game. It was a pleasure to meet him and compete with him.”

When asked about how it felt to have his name on the same trophy as Tiger Woods, Baldridge said, “It didn’t hit me until I started looking at the names on the trophy. It’s pretty surreal. I usually don’t get too excited about things, but it’s pretty cool to see that.”

Baldridge, the No. 29 seed in the bracket, just finished his senior year playing for the Pacific Lutheran University men’s golf team, where during his junior year was named the Northwest Conference Player of the Year.

Yu, the No. 46 seed, will be a senior next year on the Oregon State University men’s golf team. He had cruised through the bracket, winning three of his matches by 6&5 margins, including the quarterfinal match. In last year’s championship, Yu lost in the quarterfinals to eventual champion Emmett Oh. As a youth, Yu had helped Team British Columbia win a gold medal in golf in the 2013 Canada Summer Games.

“I kind of squeezed myself into the bracket this week,” Yu said. “I didn’t play all that great in the qualifying. I had a fun time. I came up short today, but I learned a lot, and I’ll take it in stride.

The championship began with 150 players competing in 36 holes of stroke-play qualifying on July 9 and 10, with the top 64 scores seeding the players into the match-play portion of the championship. All matches were then contested over 18 holes, except the final match, which was held over 36 holes.

For final scoring in the match-play bracket, visit www.thepnga.org. And click here for complete information about the championship.

Baldridge now adds his name to the Macan Cup, the perpetual trophy of the PNGA Men’s Amateur, donated to the championship by 1913 champion A.V. Macan, who is a member of the Pacific Northwest Golf Hall of Fame.

Names of the other past champions include such luminaries as Tiger Woods, Jeff Quinney, Ben Crane, Jeff Coston, Nick Flanagan, Jim McLean and Pacific Northwest Golf Hall of Famers Chandler Egan, Harry Givan, Jack Westland, Bud Ward and George Holland, among many others.

First held in 1899, the PNGA Men’s Amateur is one of the oldest amateur golf championships in the world.

The PNGA Men’s Amateur Championship is one of 15 major, regional, amateur championships for men, women, juniors, and seniors conducted annually by the PNGA throughout the Northwest.

This is the second time The Home Course has hosted the PNGA Men’s Amateur, having previously been the venue in 2009.