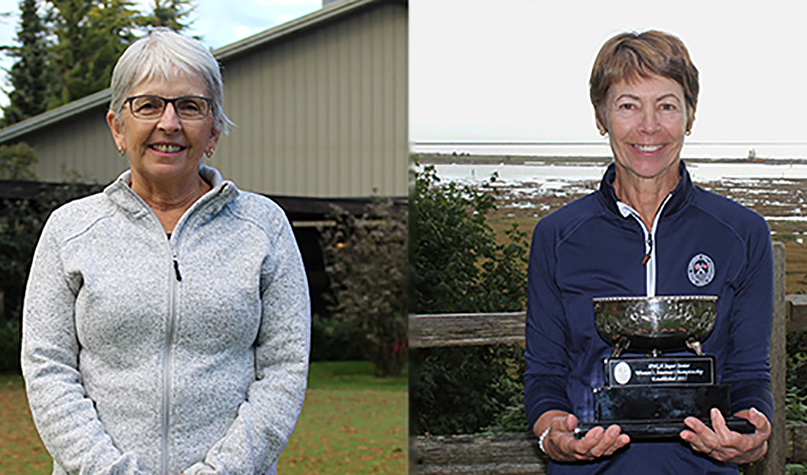 Jackie Little (Procter, B.C.) shot rounds of 72-81 to win the 32nd Pacific Northwest Senior Women’s Amateur Championship. This is her third title in this championship, having previously won in 2008 and 2009.

Both championships were held concurrently last week at the par-73 Shaughnessy Golf and Country Club in Vancouver, B.C. Each championship consisted of 36 holes of stroke play, and were conducted by the Pacific Northwest Golf Association (PNGA).

In the first round of the Senior Women’s Amateur, Little shot the only under-par round of the championship, a 1-under 72. “Yesterday my ball-striking was really good,” she said. “It was probably the best ball-striking I’ve had in a very long time. Today, the conditions kind of got the best of me. I just couldn’t settle down when the wind picked up. But it’s been a good week. I love Shaughnessy.”

Last year, Little was inducted into the Pacific Northwest Golf Hall of Fame. Earlier this summer, she won the BC Senior Women’s Amateur, the sixth time she has won that championship.

After picking up her trophy this afternoon, Little immediately headed for the airport, where she was flying to compete in the U.S. Senior Women’s Amateur.

In the Super Senior Amateur, Horwood won it on her home course of Shaughnessy. “It’s an honor to win this championship on my home club,” Horwood said. “I’m grateful to Shaughnessy for having us here. There’s good things and bad things about playing on your home course. On the one hand you’re more familiar with it, but on the other you know where all the problems are.”

Horwood shot even-par in the first round. “But today the wind came up, and I felt some pressure from my opponents,” she said. “But I’m thrilled to win the Super Seniors. I’m just grateful there’s opportunity for women of my age to play competitively. It’s been a fun week, and wonderful to see everyone again.”

Last year, Horwood was inducted into the Golf Hall of Fame of BC.

Designed by Pacific Northwest Golf Hall of Famer A.V. Macan, the original Shaughnessy Golf and Country Club opened in 1911. Macan also designed new Shaughnessy, when it was moved to a new site in the early 1960s. Shaughnessy has been the site of numerous regional and national championships. It has hosted the Canadian Open four times (1948, 1966, 2005, 2011) and the Women’s Canadian Open (1969).

The PNGA was founded on February 4, 1899. It is a 501c3 charitable, international, amateur golf association dedicated to preserving the true spirit of golf by supporting its allied associations, conducting quality championships, and promoting activities beneficial to golfers in the Pacific Northwest. For more than a century, the Association has been a pioneer in developing competitions and services and its mission has grown and evolved. Today, the PNGA remains committed to being a truly regional organization providing benefits and services to its members and member clubs throughout the Northwest.