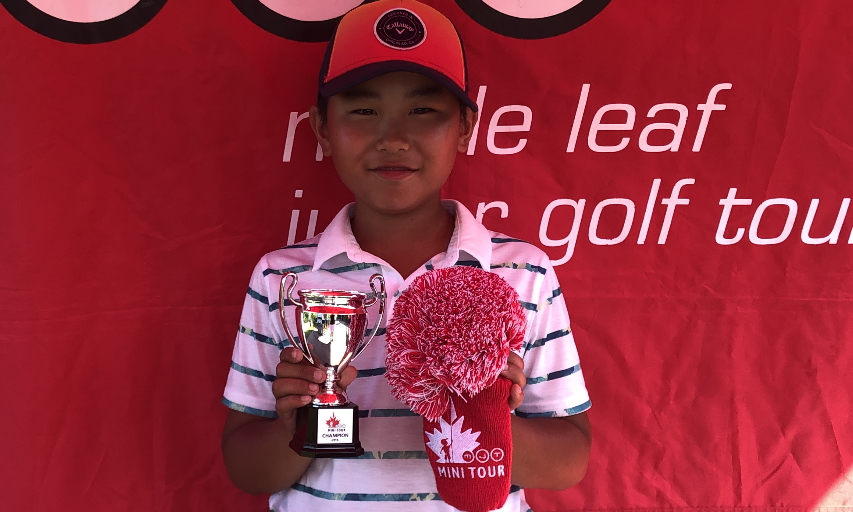 CAMBRIDGE, Ontario — On August 6, the Boston Pizza-presented Maple Leaf Junior Golf Tour awarded trophies to four division winners on the MJT Mini Tour at Beaverdale Golf Club in Cambridge, ON, where young golfers ages 12 and under were competing on Canada’s #1-played junior golf tour. With the sun shining down on the talented young golfers, this was their final opportunity to punch their ticket into the upcoming MJT Mini Tour National Championship presented by Ford Canada at Tsawwassen Springs in Tsawwassen, BC, later this month.

We begin with a great round from 10-year-old Harrison Zhang, in the MJT Boys 9-10 Division. The Markham, ON, junior golfer made four birdies and shot one-under par on his back nine to win the division with a score of 75. “The highlight of the tournament for me was making back-to-back birdies,” said Zhang, who birdied holes 13 and 14 consecutively. Coming in second place with a score of 80 was Markham’s nine-year-old golfer, Andy Dai.

In the MJT Girls 9-10 Division, Maple, ON-resident, Shauna Liu, 10, fired a 79 to capture the win. Liu, who is playing in her first year on the MJT, grabbed her second Mini Tour title of 2019, besting Anum Manzoor, 10, of Oakville, ON, who finished in second place with a score of 87.

Winning by a narrow one-shot margin over 12-year-old, Jameson Staab, of Kitchener, ON, in the MJT Boys 11-12 Division, was 11-year-old Thomas Lin, of Ancaster, ON. Lin (82) and Staab (83) were going back and forth for most of the round right up until the end where Lin closed out with three straight pars to capture the title.

A very close finish also took place in the MJT Girls 11-12 Division. Emerging victorious was Oakville’s Angela Cai, 11, who shot an 80 to win by two shots over Orangeville, ON’s Ava Di Martino (82), 12, and Burlington, ON’s Sophie Weber (82), 11. When asked about how she felt, Cai mentioned, “I feel really happy and proud of myself for winning and there’s nothing MJT could have done to make this tournament more enjoyable!”

Full results including PLYR Closest-to-the-Pin competition winners are posted on the MJT website here. This tournament was the final Mini Tour event in Ontario prior to the National Championship in British Columbia. On September 21, the MJT Ontario Mini Tour will play at Whispering Ridge Golf Club in Brooklin for its final tournament of the year. Registration is on the MJT website at www.maplejt.com.