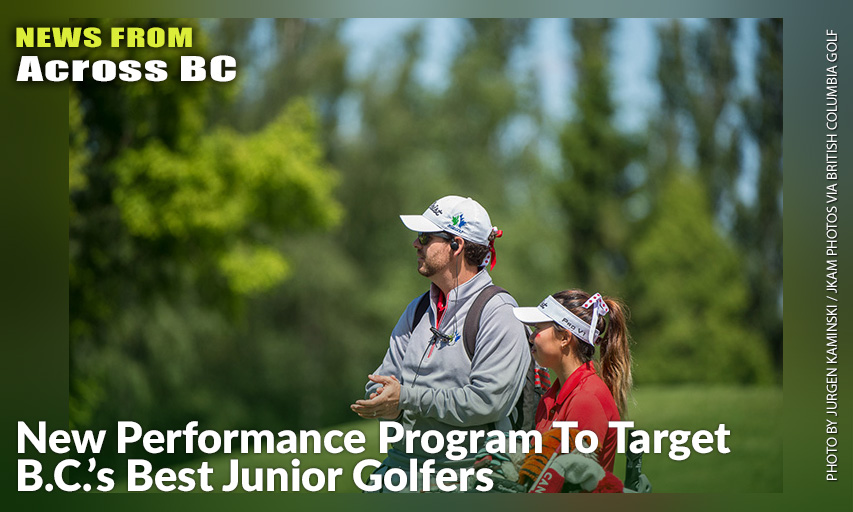 A new program designed to provide some of this province’s top junior golfers with the resources to help them take their games to the next level is a key initiative for British Columbia Golf in 2020.

The British Columbia Golf Performance Program is being rolled out in January, when eight athletes will be selected as the program’s first participants.

The goal, quite simply, is to help more British Columbia junior golfers play their way onto Golf Canada’s national teams. “This is a major enhancement to our existing programs and services,” says Debbie Pyne, Managing Director of Player Development for British Columbia Golf.

“This will be a year-round program and it is modelled after Golf Canada’s National Development Team. Athletes will work with our core leadership team -- a team of coaches and sports specialists that we have put together.”

Pyne and Colin Lavers, British Columbia Golf’s Performance Coach, have spent considerable time over the past number of months putting the new Performance Program in place. “Ambitious is a good way to put it,” says Lavers, a Class ‘A‘ CPGA Professional who works out of Seymour Golf & Country Club in North Vancouver.

"I think it Is Just More In-Depth And In Line With Where The National Organizations Are. It Offers Additional Support For The Athletes Along The Performance Pathway. We Want To Provide Opportunities For Our Best Athletes To Train Together And For Them To Compete In High-Level Competitions."
Program participants will get together at least once a month for training and will be fully supported on site during tournament play. The first training camp has already been set for February 21-23, 2020 at the Fortius Sport & Health facility in Burnaby. A multi-sport centre for optimizing athletes performance (Olympic athletes train here)

Both Pyne and Lavers emphasize the new Performance Program is designed to complement, not replace, the existing coaching that program participants are already getting from their own swing coaches. “To be honest, our program is not going to be very technically based,” Lavers says. “Most likely, every athlete on this team will have a technical coach, a private coach. Our job will be to support that coach, be eyes and ears for them when they are not seeing their player in competition.”

Pyne and others thought a change was needed to give promising juniors an extra push. British Columbia continues to be well represented on Golf Canada’s national teams, but results in major events have lagged the past year or two.

“If we go back and look at our results the evidence has shown we are not producing the number of high-calibre players as we should in this province,” Pyne says. “There is an expectation and we know we have the players who can do it. We believe they need more resources to get to that next level.”

Golf Canada recently announced its 2020 National Amateur and Junior teams. Mary Parsons of Delta is on the Women’s National Amateur Team, while Angela Arora and Angel Lin, both of Surrey, are on the Junior Girls Team. Jace Minni of Delta was named to the Boys’ Junior Team.

Lavers says performance has lagged most notably on the boy's side in British Columbia. “We have a lot of advantages here in B.C., mainly that we have got the best weather, so we have the longest golfing season, on some of the best golf courses in the country,” Lavers says.

“We have got a ton of amazing coaches here locally, so we have got a really good base. But the results haven’t been there, mainly on the boy's side. Our girls are still doing awesome. We have hit a bit of a lull the past couple of years. I see we have got quite a few 14-, 15- and 16-year-old boys now who we think are going to knock on the door here in the next couple of years. We expect our program to help address that and put us at the top.”

For more information, contact BC Golf Performance Coach Colin Lavers at This email address is being protected from spambots. You need JavaScript enabled to view it..