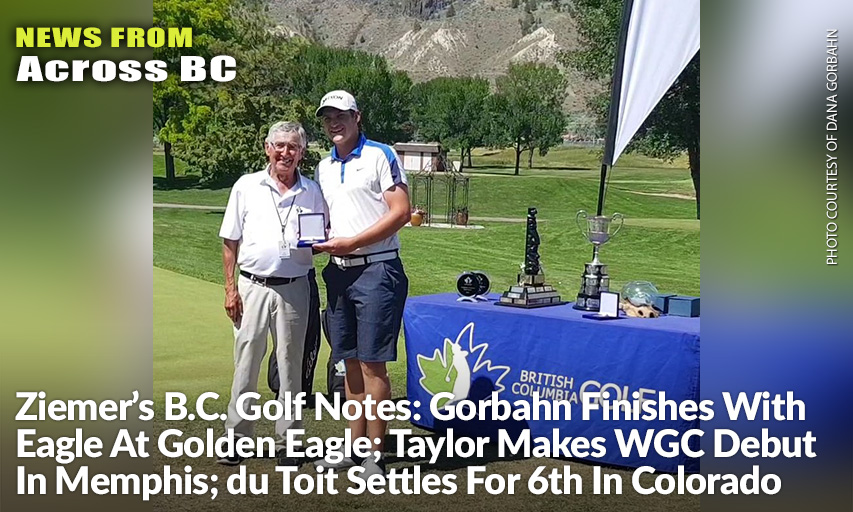 Gorbahn finished his round with an eagle on his 18th hole (the par 5 ninth) at Golden Eagle’s North Course to cap off a six-under 66. That left Gorbahn with a 36-hole score of 11-under par, four shots better than amateur Tristan Mandur of Duncan and fellow amateur Amanda Minni of Delta, who won the women’s division.

The win was worth $2,000 to Gorbahn, who played his collegiate golf at the University of Nevada-Reno. “That was the best shot I hit over the last two days,” Gorbahn said of his second shot into the par 5. “I was 205 (yards) out of the rough and the ball was sitting straight down. I just chipped a seven-iron and it landed on the front of the green and rolled up to 12 or 15 feet. It was nice to make the putt.”

The 23-year-old Gorbahn is a young pro looking for a place to play. In other words, the Vancouver Golf Tour is tailor-made for him. After his round Sunday, he planned to get some rest and then make the long drive Monday to Fort St. John, where he will play in a pro-am later this week.

Second-place pro money went to Abbotsford’s Brett Webster, who finished at six-under and earned $1,400. Kelowna’s John Mlikotic and Zach Olson of Chilliwack were another shot back at five-under and each earned $1,000.

He held the halfway lead, but Kimberley’s Jared du Toit had to settle for a tie for sixth-place finish at the Colorado Open. The former B.C. Junior champion finished the 72-hole event at 20-under par after closing with his second straight three-under 69 in Sunday’s final round. That was nine shots behind winner Mark Anguiano of Playa Vista, Calif. Anguiano, who earned $100,000 for the win, closed the tourney with weekend rounds of 60 and 65. 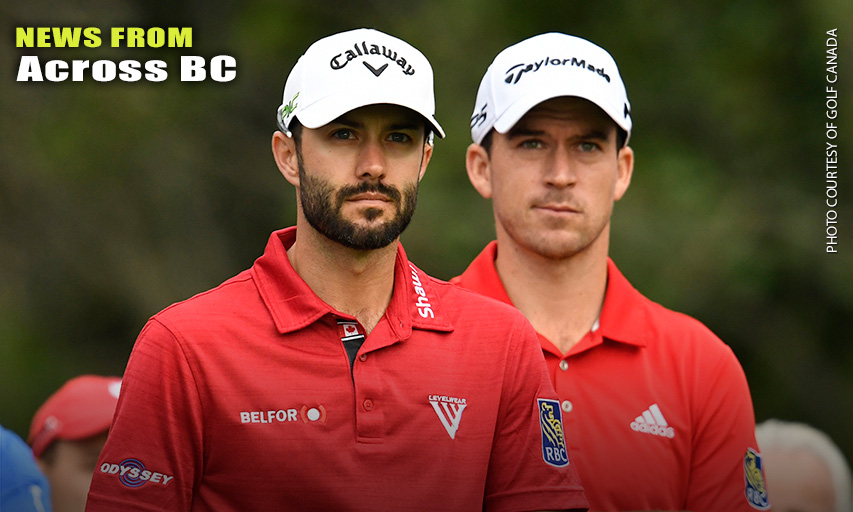 Taylor and Hadwin both took last week off and did not play in the 3M Open in Blaine, Minn. Merritt’s Roger Sloan missed the cut at the 3M and will compete this week at the Barracuda Championship, a Stableford scoring event played at Tahoe Mountain Golf Club near Reno, Nev.

It was a roller-coaster of a final round Sunday for Surrey’s Adam Svensson at the Korn Ferry Tour’s Price Cutter Championship in Springfield, Mo. Svensson started his day with three straight birdies and looked like he was headed for another top-10 finish. But after a string of five straight pars, Svensson then played holes 9 through 13 in four-over par.

Svensson then rallied and finished his round by going birdie-birdie-eagle. He shot a three-under 69 to finish the event at 14-under and in a tie for 17th place. Vancouver’s Stuart Macdonald finished in 68th place at two-under following his one-under 71 on Sunday. The Korn Ferry Tour heads to Omaha, Neb., this week for the Pinnacle Bank Championship. Macdonald is in the field, while Svensson is taking the week off.

Michael Valk, who plays his collegiate golf at the University of B.C., won the Alberta Men’s Amateur Championship in his home town of Medicine Hat. Valk closed the 54-hole event with a six-under 65 at Medicine Hat Golf & Country Club that left him at nine-under par. That was five shots better than runner-up Hunter Thomson of Calgary.

The Vancouver Resource Society has been holding its popular major golf pools for the past 28 years. With the major golf season turned upside down due to COVID-19, the VRS wants to let customers know that it will hold two pools this year for the U.S. Open, scheduled for Sept. 17-20, and the Masters, scheduled for Nov. 12-15. Entries will be available about two weeks before each event. For more information, visit vrs.org.