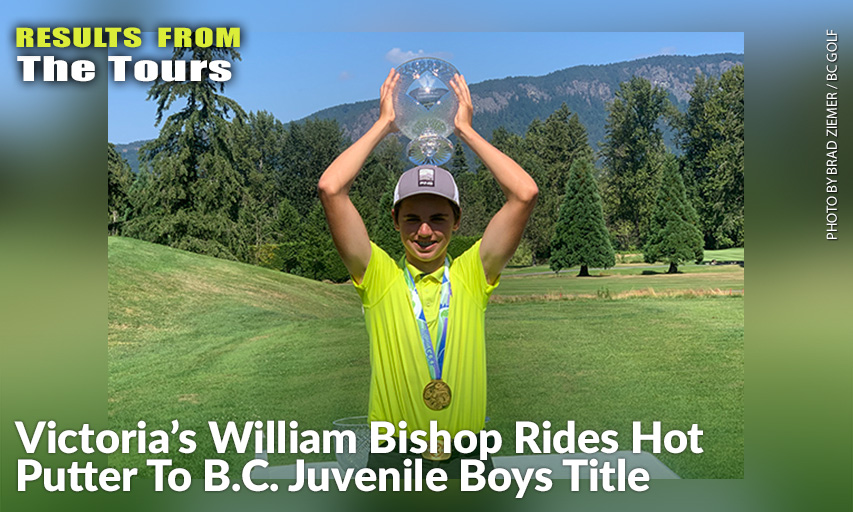 The 16-year-old from Victoria has had quite the summer. The win followed his triumph at the B.C. Junior Boys Championship in late July at Okanagan Golf Club’s Bear Course in Kelowna.

Bishop credited a hot putter with helping him seal the win. “I was just playing great golf this week and I went out there and had a winning mindset,” said Bishop, who plays out of Victoria Golf Club. “I wasn’t hitting the ball great today but my putting sure showed up. I think it was a solid three days of golf, nothing I can really complain about.”

He finished the 54-hole competition for players aged 16 and younger at eight-under par after closing with a three-under 67.

Bishop began the day tied with Jaakkola at five-under par. He had built a two-shot lead by the time they made the turn, but Bishop still needed a couple of key par saves early on the back nine to keep momentum on his side.

He hooked his tee shot on the par 4 10th hole, but scrambled to make par. “I hit a bad tee shot on 10 but I punched out and chipped on to about 20 feet and made the come-backer for par, which was great,” Bishop said. “Then on 12 I had to punch out again and I had a wedge shot from like 70 yards out and made the par again. Those were good saves. They feel a little better than birdies, in my opinion.”

Bishop seemed to be making every putt he looked at. He birdied the 11th, 13th and 14th holes to extend his lead to six shots on the back nine and added another birdie on No. 16. “I was pretty much on cruise control,” he said. “It was a great feeling. It was a lot less stressful. I was able to be a little more aggressive which was nice."

Jaakkola, meanwhile, was struggling with his game. Bogeys at No. 10 and 12, those same holes where Bishop was saving par, were costly. “I just didn’t quite have my best stuff today,” Jaakkola said. “Everything seemed a little bit off. I wasn’t as sharp as the first two days for sure. “It seemed when he was out of place he’d get up and down and all credit to him. He played awesome today. He earned it.”

Jaakkola, who plays out of Seymour Golf & Country Club, was proud of the way he finished his round and called the day a good learning experience. “To play in the final group is always a good experience,” he said. 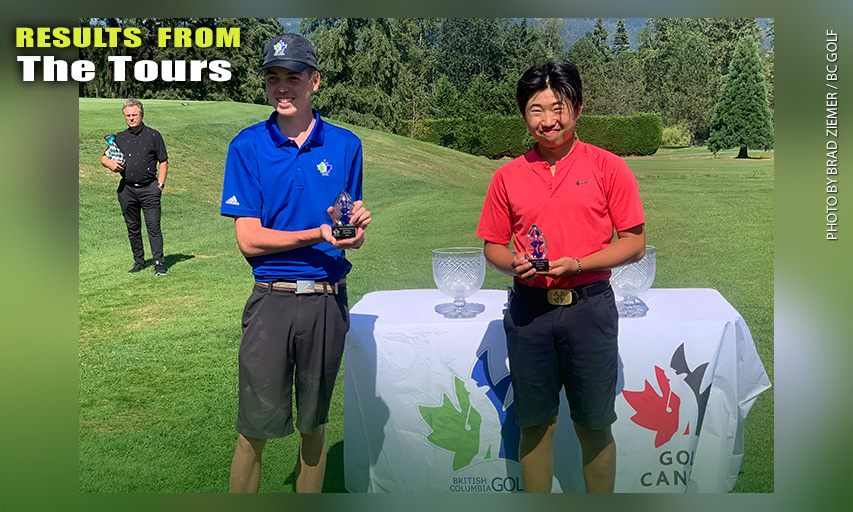 “You’ve normally got to have your best stuff to win and and it just wasn’t that day for me. But I am really proud of the way I finished with two birdies on the last three holes. It was a good learning experience for sure.”

Danny Im of Langley finished alone in third at one-over par after closing with a four-over 74. Ryan Vest of Vernon and Gavyn Knight of Parksville tied for fourth at five-over. The tournament also included a two-person best-ball competition.

The team of Jaakkola and Shunkichi Yamamoto of Victoria won with the score of 14-under par. That was one shot better than the second-place team of Knight and Lucas Kulai of Cobble Hill.