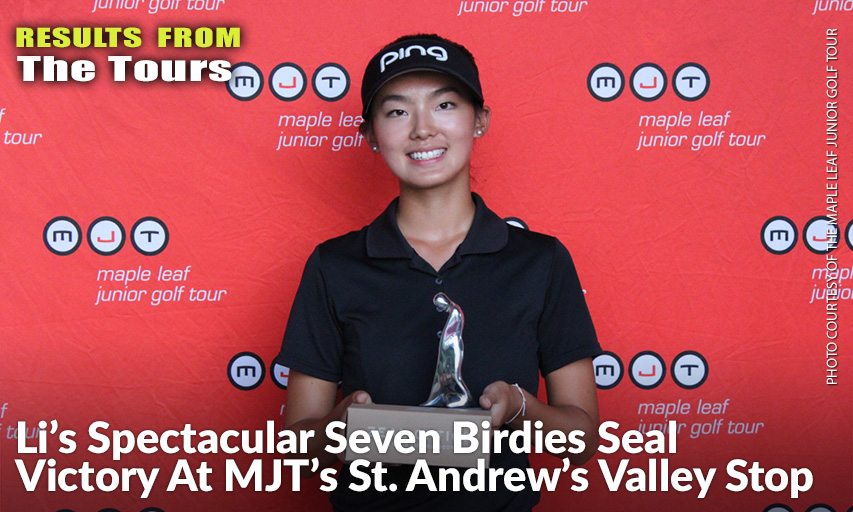 AURORA, Ontario — A full field of elite juniors took part in the Maple Leaf Junior Golf Tour’s MJT Ontario Series at St. Andrew’s Valley Golf Club in Aurora, August 15 and 16, competing for title in six divisions under new player health and safety protocols. With only three more opportunities in Ontario to qualify for the prestigious WAGR-ranked MJT National Championship presented by TaylorMade and adidas Golf in British Columbia this Fall, players were also aiming for valuable Order of Merit points to bring their talents to the national stage.

A spectacular seven birdies over the two days by Richmond Hill, ON, resident Krystal Li, 15, earned a commanding victory in the MJT Girls 15-19 Division. Li fired scores of 72 and 68 (140), recording a new personal best score on the second day. “I felt my mental game was really strong during the two rounds,” commented Li, who took home the Low Overall score of the competition. “I was really happy with my overall performance.”

Oakville, ON, golfer Charlie Francuz earned his first career MJT title in the Junior Boys Division with scores of 72 and 73 (145). The 17-year-old player, who only began his campaign on the MJT last year, made nine birdies throughout the competition including beginning his second round with four straight. “After a year and a half out of the winner’s circle and a tough start to the season with back issues, I finally prevailed,” commented Francuz, whose battle back to the top was commendable.

The MJT Juvenile Boys Division witnessed a jam-packed leaderboard where three shots separated the top six competitors. Completing the comeback was 16-year-old Ryan Somerville, of Aurora. Somerville fired a 77 in the first round to sit in two shots back of lead and propelled himself to the top on the second day with a round of 72 (149) to win the title by one stroke.

Holding on to a one-shot victory in the MJT Girls U15 Division was Guelph, ON, player Tara O’Connor. The 14-year-old golfer, who is no stranger to the top of the leaderboards on the MJT, carded solid rounds of 78 and 76 (154) for the win. When asked if she was thinking about the other competitors during the rounds, O’Connor responded, “Towards the end I was because it was coming down to the last few holes.” O’Connor relied on her strong mental game and previous experience to hold off the rest of the field and take home the Hoselton trophy.

Recording a six-shot win in the MJT Bantam Boys Division was 12-year-old Luke Smith, of Toronto, ON. Smith fired scores of 75 and 72 (147) making 29 pars in 36 holes. “My consistency throughout the final day was key,” commented Smith, who made 16 of his pars just on the second day alone.

Continuing to impress on the MJT this year is 11-year-old Dawson Lew in the MJT Peewee Boys Division. The Markham, ON, junior golfer shot 72 and 74 (146) to win his fourth 2020 MJT title. “My short game was the best part of my game,” mentioned Lew, whose up-and-down rate stood high at 75% over the two days. Lew will be looking to continue his reign in the final stretch of the 2020 MJT Ontario circuit.

Full results of the event can be viewed here. The next MJT Ontario Junior Tour stop is the MJT ClubLink Series at Caledon Woods Golf Club in Bolton, August 24 and 25. More information can be found online at www.maplejt.com.