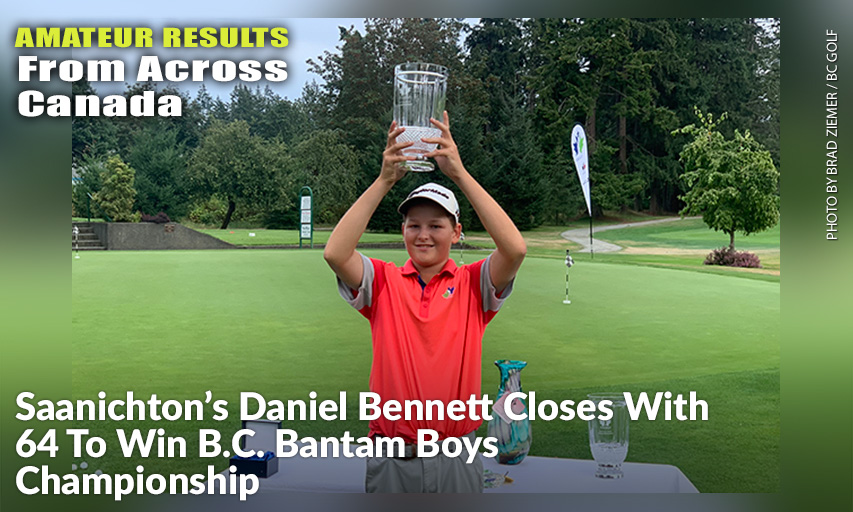 CHEMAINUS -- When his eagle landed on  the second hole of Wednesday’s final round, Daniel Bennett figured he might be in for a good day. Make that a great day.

The 14-year-old from Saanichton scorched Mount Brenton Golf Club with a seven-under 64 to win the B.C. Bantam Boys Championship by six shots.

Bennett’s eagle came when he holed a sand wedge from 103 yards on the par 4 second hole. “It hit the pin, kicked right and then spun right back into the hole,” said Bennett, who is about to enter Grade 10 at Claremont Secondary and plays out of Gorge Vale Golf Club.

Bennett, who started the 36-hole tournament two shots behind first-round leader Matt Wilson of Nanaimo, said the eagle gave him the boost he needed. “It fired me up and gave me lots of momentum heading into the next few holes,” he said. “I was really confident after that and just kept it going.

The Bantam Championship was open to players aged 14 and under as of Aug. 1. This was Bennett’s final year of eligibility and he came to Chemainus determined to make amends for what he called a disappointing performance at last week’s B.C. Juvenile Boys Championship down the Malahat at Cowichan Golf Club. 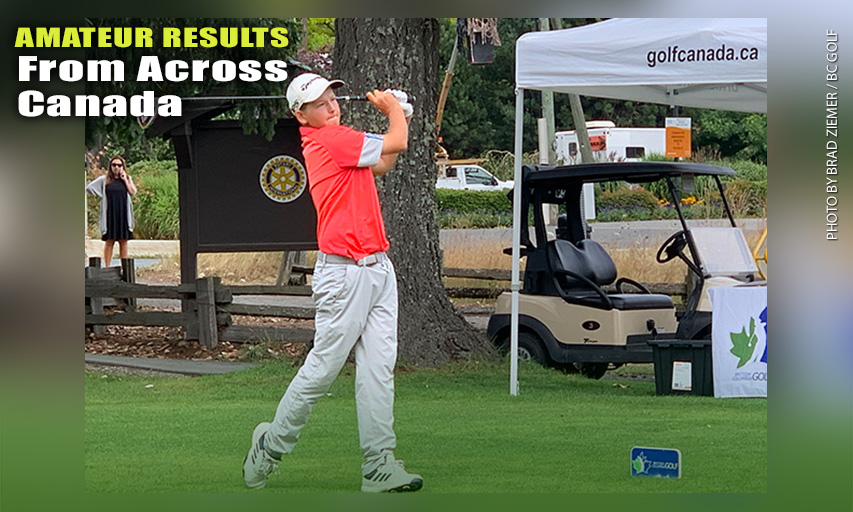 Bennett tied for 12th at the Juvenile tourney after finishing second in the same event in 2019. “I struggled with my putter at Cowichan. I worked on my putting really hard before this week and it seemed to help,” he said.

Bennett needed just 31 strokes on the front nine and continued to hole more birdies on the back side. “I was rolling in lots of putts,” he said. “I was hitting it pretty close, but my putter was hot. I chipped in on 14 for birdie so that was really good. “This feels so good,” he said of the win. “This was my final year, so it’s good to pull through. I am really happy.”

Bennett’s 64 on Wednesday bettered his previous best competitive round by five shots. “It’s good to get a low one in a tournament,” he said.

Bennett finished the tournament at six-under par. Roy Baek of Coquitlam, who closed with a solid one-under 70, was second at even par. Ryan Vest of Vernon, who fired an even-par 70 on Wednesday, was third at one-over par.

Lucas Vizzutti of Powell River and Luke Van Alstine of Vancouver shared first place in the Novice Boys category, which was open to less experienced golfers and used a net Stableford scoring system. They both finished with 62 points. Zachary Grisdale of Mill Bay was third with 58 points.

The tournament also included a two-person best-ball competition. The team of Baek and Kye Nielsen of Surrey won with a 36-hole total of 11-under par. That was two shots better than the second-place team of Bennett and Aiden Snyman of West Vancouver. Ryan Liang and William Tu, both of Vancouver, finished third at seven-under.