Fantastic Finale To MJT Saskatchewan Season At The Legends In Warman 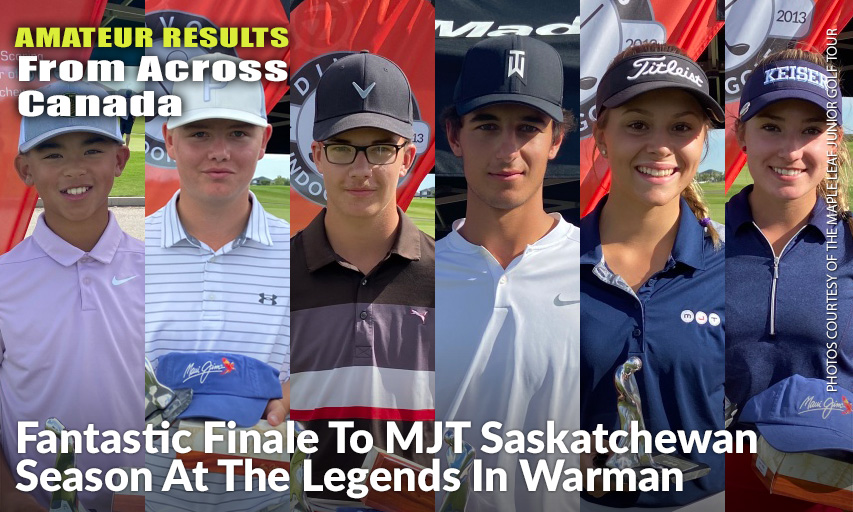 WARMAN, Saskatchewan — The Maple Leaf Junior Golf Tour capped off a tremendously successful season in Saskatchewan at the MJT Golf Saskatchewan Order of Merit (OOM) Championship at The Legends Golf Club in Warman, August 22 and 23. Operating under new health and safety protocols, Canada’s number one-played Junior Golf Tour managed a Junior Tour event over the two days with a Mini Tour event on the final day, with many happy players and their families ending the golf season on a high note.

High winds affected day one scoring In the six divisions, however the birdie train was on a steam-roll for 14-year old Darien Herlick in the MJT Bantam Boys field. The Weyburn, SK, golfer made an event-low 12 birdies over 36 holes to fire 72 and 70 (142), winning the title by a commanding five shots. “I kept the ball in play all weekend,” commented Herlick, who had no trouble capitalizing on his accuracy and picked up his second win of the 2020 Junior Tour season.

MJT veteran champion Cort Tunall, 16, returned to the top of the podium in the MJT Juvenile Boys Division. The Kindersley, SK, player fired rounds of 73 and 70 (143), making eight birdies over the two days. “I was putting pretty good,” remarked Tunall, who rolled in some key birdie putts. “It feels good to win especially because this is the last [event].”

A spectacular finish took place in the MJT Junior Boys Division that witnessed four players finish within one shot of each other. Emerging victorious after playing his last four holes of the competition at even par was 19-year old Cole Nagy, of Saskatoon, SK. Nagy opening round of 77 put him six shots back of the lead but he made a charge on day two with an eagle and five birdies in the span of nine holes to climb back and win the title. “It feels so good to win with so many good golfers in the field,” commented Nagy. “My putting was the key to my victory.”

Regina, SK’s Autumn Neiszner, 16, returned to the winner’s circle over the weekend earning her first 2020 MJT victory in the Girls 15-19 Division. Neiszner, who has had a pair of runner-up finishes this year, opened this competition firing a personal-best round of 72. From there she managed to hold off a great charge from behind with a round of 78 (150) and take home the Hoselton trophy. “I tried not to get too far ahead of myself,” commented Neiszner. “I focused on each shot at a time and it feels really good to win my first MJT [event] of the year.” 17-year old Sarah Grieve, of Saskatoon, carded scores of 76 and 75 (151) including finishing one-under par in her final four holes to finish in second place.

The MJT Peewee Boys Division saw a jam-packed leaderboard in which the top six competitors were separated by five shots. Capturing the title with a comeback win was 12-year old Elias Haukeness, of Buena Vista, SK. Haukeness has had himself quite the season this year on the MJT with two runner-up finishes and now his third win at the Legends Golf Club with scores of 86 and 80 (166). “I was hitting my drives straight and making my putts,” he commented. “It feels great to win.”

Ella Kozak, 14, of Yorkton, SK, carded 83 and 87 (170) to win the MJT Girls U15 Division title in style. “My irons and long game were the key to my victory,” commented Kozak, who looked sharp tee-to-green. “I am proud of myself and it feels good to win.”

Full results from the event, which concludes the 2020 season in Saskatchewan, can be viewed here. The overall MJT National Championship presented by TaylorMade and adidas Golf at Morgan Creek Golf Course will take place from October 9 to 12 in Surrey, BC, and players who have qualified will be notified shortly. More information is available at www.maplejt.com.