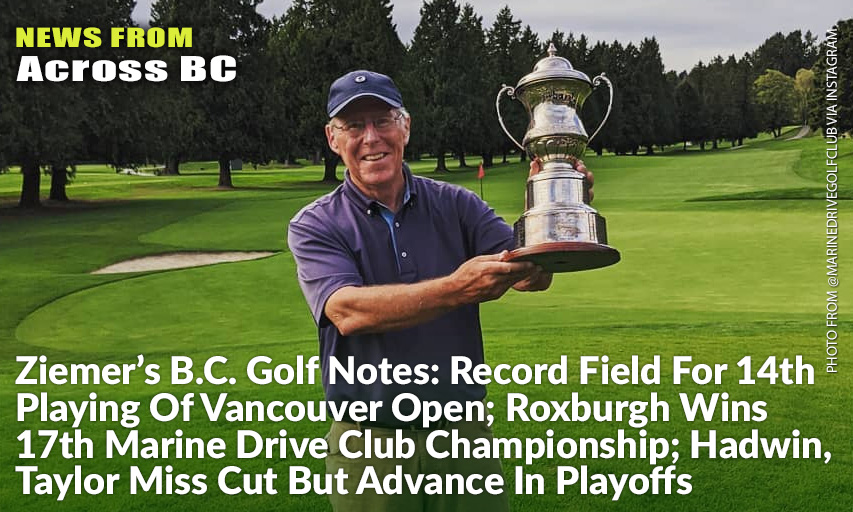 A record 264 players will be in the field for the 14th playing of the Vancouver Golf Tour’s Vancouver Open, which begins Friday and runs through Sunday at the three City of Vancouver courses.

Sixty-five pros are among the entrants and will compete for a $40,000 purse, with $10,000 going to the winner. Last year’s winner, Edmonton native Steven Lecuyer, will be back to defend his title.

Others in the pro field include 2019 runner-up Kevin Spooner of West Vancouver, Langley’s James Allenby, Kevin Stinson of Mission, Lawren Rowe of Victoria, Chris Crisologo of Richmond, former national team member Joey Savoie of La Prairie, Que., and Evan Holmes of Vancouver, who won the opener of the Canada Life Series at Bear Mountain in Victoria two weeks ago. 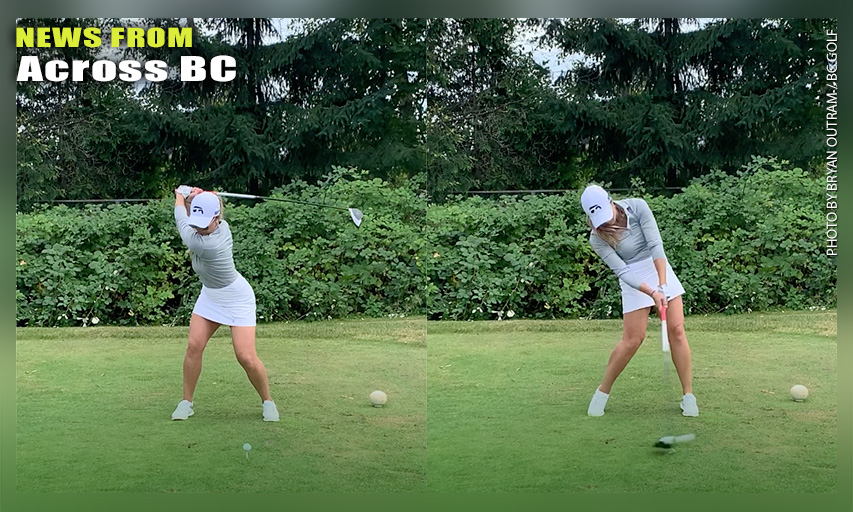 Christine Wong Hits A Bomb At Langara During Media Day For The Vancouver Open. This One Would End Up 15 Feet From The Hole – 292 Yards Away.

Female pros entered include Richmond’s Christine Wong, Naomi Ko of Victoria and Vancouver’s Karishma Thiagaraj. “I think one of the biggest stories for this year is the number of high-level amateurs in the field versus last year,” said VGT commissioner Fraser Mulholland.

“We have, I think, almost 100 players who are 5.0 (handicap index) or less and I think almost 50 that are scratch or better. That is a big change for us.”

The top players will play their opening rounds Friday at McCleery Golf Course, then move to Langara on Saturday with the final round going Sunday at Fraserview.

Lecuyer won last year’s event with a three-day total of 11-under. American Chris Epperson holds the tournament record with the 14-under total he posted in 2013.

The 68-year-old Roxburgh had to beat his son James to do it.

Roxburgh trailed his son by one at the turn on Sunday, but ended up winning by three with a 36-hole total of three-under par. James tied for second at even-par with Sadiq Jiwa.

Abbotsford natives Nick Taylor and Adam Hadwin have advanced to the second round of the FedEx Cup playoffs despite both missing the cut at the Northern Trust tourney in suburban Boston.

The top 70 players on the points list qualified to play in the BMW. Fellow Canadians Corey Conners and Mackenzie Hughes also both advanced to the BMW Championship.

The top 30 players after the BMW advance to the Tour Championship in Atlanta.

Taylor had an eventful weekend despite missing the cut in Boston. Taylor joined Joel Dahmen, his former University of Washington roommate and fellow PGA TOUR member, in a money match versus a Boston-area club pro and his cousin.

The match was set up after Dahmen, who also missed the cut at the Northern Trust, used social media to put the word out he was looking to play a friendly money match on the weekend. 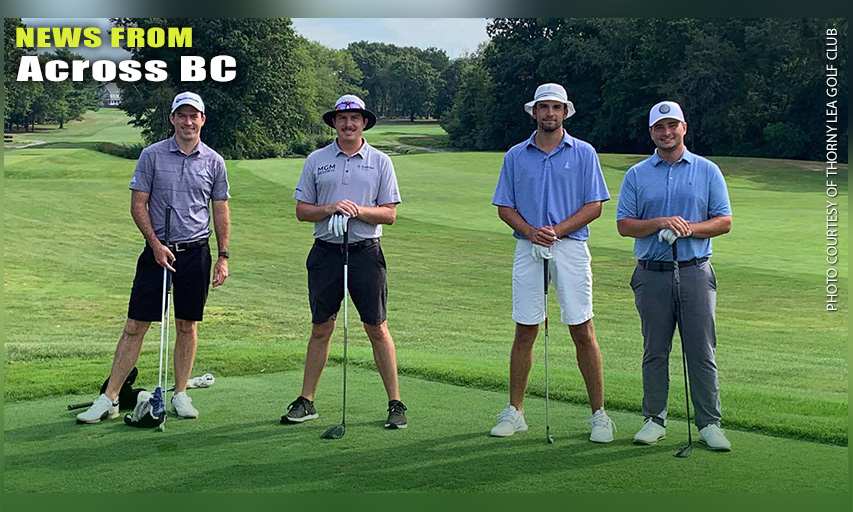 Dahmen was flooded with offers and ended up accepting a challenge from Cody Sweeney, an assistant pro at Thorny Lea Golf Club in suburban Boston. Sweeney’s partner was his cousin Andrew Roy, who has a plus-handicap.

They played a $300 Nassau with Dahmen and Taylor giving their opponents an undisclosed number of strokes per side. After winning the first three holes Taylor and Dahmen, who Vancouver-area golf fans might remember as the first winner of the PGA Tour Canada stop at Point Grey Golf Club in 2014, lost the match on the 18th green.

Vancouver’s Stuart Macdonald closed with a four-under 67 and tied for 18th at the Korn Ferry Tour’s Nationwide Children’s Hospital Championship in Columbus, Ohio.

The finish earned Macdonald a spot in this week’s Korn Ferry Tour Championship in Newburgh, Ind. That event is being held at Victoria National Golf Club, a course Macdonald knows well from his days at Purdue University.

Cao won by eight shots and has the series points lead after two of the four tournaments.
Cao, a native of China and now a Delta resident, has been a member at Beach Grove since late last year. It didn’t take him long to set the course record at Beach Grove with a 10-under 61.

“I have watched him hit balls on the range and he hits it really well,” Derrheim said. “He has been good with our junior members. He has played with some of them and it’s nice for them to have a player like that at our course.”

Cao, 29, is a past winner on the PGA Tour China circuit. He earned $9,000 for his win on Bear Mountain’s Valley Course, where he finished 13-under par in the 54-hole event. He finished third in the Canada Life Series opener at Bear Mountain’s Mountain Course.

The Canada Life Series concludes with two events next month at TPC Toronto.

The PGA of BC Championship goes Monday and Tuesday at the Crown Isle Golf Resort in Courtenay. A new champion will be crowned as 2019 winner Bryn Parry of North Vancouver is not in the field.

Ben Griffin of Uplands Golf Club fired a nine-under 62 and beat the field by eight shots at a Vancouver Island Club Professional Tour event at Cordova Bay in Victoria. . .Kevin Stinson of Cheam Mountain Golf Course in Chilliwack shot a four-under 68 to win the Vancouver Golf Tour’s Kings Links Championship. Stinson earned $750 for the win. Brad Clapp of Cultus Lake Golf Course was second with a one-under 71. . .Pitt Meadows Golf Club has announced it is now open for public play. Green fees can be booked three days in advance.