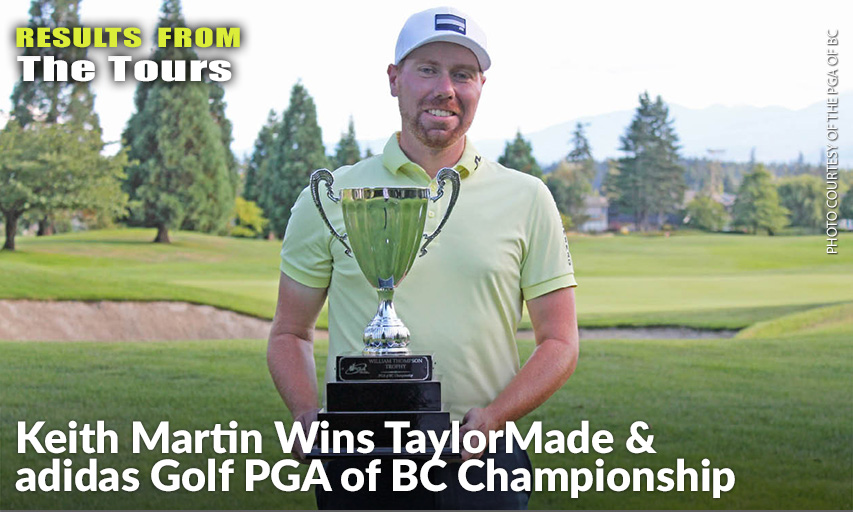 The first-year PGA of BC Professional from Kelowna’s Tower Ranch Golf Club overtook first-round leader Brad Clapp (Cultus Lake Golf Club) on the back nine of Tuesday’s final round, finishing at 6-under for the 36-hole championship.

Clapp’s final round of 74 left him at 4-under for the event, which was good for a runner-up finish at the same venue where he captured his 2012 PGA of BC Championship title. The trio of 2018 winner Kevin Stinson (Cheam Mountain Golf Course), Matthew Steinbach (Simon Fraser University) and Steven MacPherson (Storey Creek Golf Club) finished in a tie for third place at 2-under.

“This is by far the biggest event I’ve ever won,” said Martin. “It’s amazing. I didn’t think this would happen this week. I was just hoping for a nice, solid finish. I hit the ball so well both days and made some good putts. It was a lot of fun out there.”

With the victory, Martin earned the winner’s share of $6,300 from the event’s $35,000 purse, a championship ring courtesy of title sponsors TaylorMade and adidas Golf, while his name will be etched on the PGA of BC’s William Thompson Trophy.

After taking most of the 2019 season off from tournament golf, the 31-year-old joined the PGA of Canada in March with the hope of competing more regularly. This week’s tournament was just his first start in a PGA of BC individual stroke-play championship, having made his debut at last month’s Pro-Assistant Championship.

“This was my first year where I wanted to play a lot more tournaments again,” said Martin. “To have success like this is really cool. It’s an awesome feeling.”

Martin started the day trailing Clapp by three strokes, but started chipping away at the lead with two birdies early on.

“After the first four holes, I felt like I had the momentum on my side and I was playing well,” said Martin. “I made a great putt on the first hole from about 12 feet, and I hit a really great shot on No. 4, the par-3, and made another birdie there to get to one down.”

Another birdie at the long par-3 12th hole gave Martin a lead that he would never relinquish. He again birdied the par-3 16th as part of a bogey-free back nine to sew up the victory.

Having played a few events at Crown Isle in the past, including a couple of Mackenzie Tour Q-School tournaments, Martin said his experience there was a big help over the two rounds.

“I felt a lot more comfortable than I have at most tournaments where you’re playing at an ‘away’ golf course,” said Martin. “I have about 20 rounds here, so I felt comfortable picking clubs off the tee and reading greens.”

Clapp, who had shot a bogey-free 66 in Monday’s opening round to sleep on the lead, wasn’t quite as sharp Tuesday, enduring two double-bogeys over the closing 18 holes.

“I just didn’t get comfortable off the tee and I put myself in some weird spots, and I just watched Keith hit it solid all day,” said Clapp. “Kudos to him, he played really well out there today.”

The 33-year-old took home $4,200 for second place and said he was pleased with the runner-up result, even though it wasn’t the finish he had hoped on.

“It’s good to always have success at this course, but coming up a couple of shots short, shooting over par and feeling like you let it get away is a bit tough to take,” said Clapp.

With a T3 finish, Stinson kept his perfect record of top-five finishes in PGA of BC championship events intact. Both he and MacPherson shot consecutive 71s to finish at 2-under, while Steinbach followed his Monday 73 with a final-round 69 to join the three-way tie.

About TaylorMade
Headquartered in Carlsbad, California, TaylorMade Golf is a leading manufacturer of high-performance golf equipment with industry-leading innovative products like SIM metalwoods, P790/P770 irons, TP5/TP5X golf balls, along with the newly launched P790 irons and Milled Grind 2 wedges. TaylorMade is the No. 1 Driver in Golf and also a major force on the PGA TOUR with one of the strongest athlete portfolios in golf, that includes Dustin Johnson, Rory McIlroy, Jason Day, Jon Rahm, Collin Morikawa and Tiger Woods. Learn more at www.taylormadegolf.ca

About adidas Golf
For over 80 years, adidas has been part of the world of sports on every level, delivering state of-the-art sports footwear, apparel and accessories. Today, adidas is a global leader in the sporting goods industry and offers a broad portfolio of products. Our strategy is simple: continuously strengthen our brands and products to improve our competitive position and financial performance. adidas golf partners with the top tour athletes who continue to win, including Jon Rahm, Dustin Johnson and recent PGA Championship winner Collin Morikawa. The company's products resonate with consumers thanks to industry-leading performance from TOUR360 footwear, the Ultimate bottoms franchise and much more. adidas Golf has a fully dedicated team that supports the Canadian marketplace with industry-leading products and service. Visit www.adidas.ca/golf.