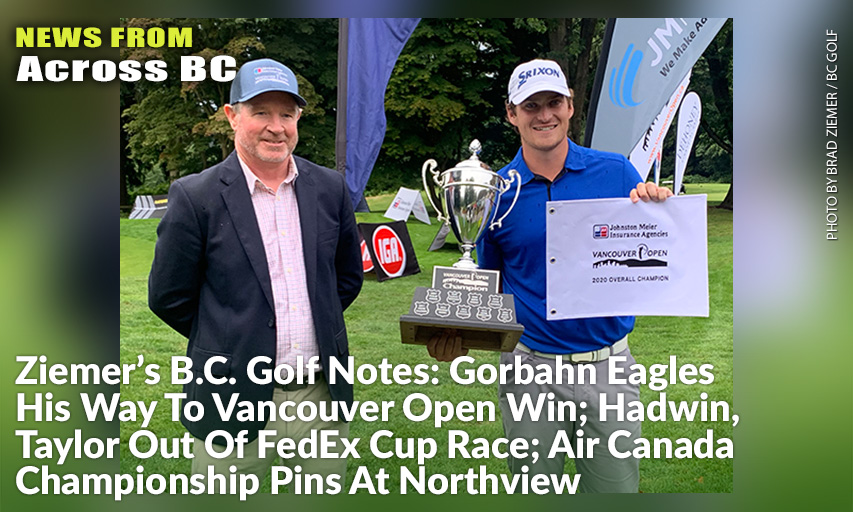 A pair of early eagles propelled Kaleb Gorbahn to his victory at the Vancouver Open.

The big-hitting Smithers native birdied the second and fourth holes — both par 5s — at Fraserview Golf Course en route to a seven-under par 65. Gorbahn finished the 54-hole tourney held at the three City of Vancouver golf courses at 11-under par.

That was two shots ahead of runner-up Kevin Spooner of West Vancouver. Gorbahn earned $10,000 for winning the Vancouver Golf Tour’s marquee event.

“Obviously the money is nice, but the experience is great,” said Gorbahn, who played his collegiate golf at the University of Nevada. “I felt like I hit a lot of tour-quality shots today. I’m learning each and every round I play. This is my fourth win in the last nine months so things are starting to move in the right direction.

“It’s reassuring to play the way I am capable of. I need to be more consistent to get things done. I didn’t win a lot as a junior or amateur, so it is nice to start winning as a professional.”

Gorbahn shot 30 on Fraserview’s front side and led by as many as four shots on the back nine. That lead was reduced to two through 15 holes but Gorbahn drained a long birdie putt on the par 3 16th hole to restore his cushion. “It was probably 70 or 80 feet and I was praying for a two-putt,” he said.

Gorbahn got better each day. He opened the tournament with a 70 in the first round at McCleery and followed that with a 68 at Langara. He now heads to Toronto for the final two events of the Canada Life Series at TPC Toronto.

Taylor dropped eight spots to 48th on the FedEx Cup points list, while Hadwin finished at No. 51. The top 30 players, who included Mackenzie Hughes of Hamilton, advanced to this week’s Tour Championship at East Lake Golf Club in Atlanta. The 2020-21 PGA TOUR season begins with the Safeway Open, which goes Sept. 10-13 in Napa, Calif.

Northview Golf & Country Club in Surrey has an interesting promotion going Sept. 3-6. On each of those days, Northview’s Ridge course will have the same pin placements and green speed (12+ on Stimpmeter) that were used the four days of the 1999 Air Canada Championship when Mike Weir won his first PGA TOUR event.

In addition, there will be a closest to the hole competition on the 14th hole where the winner will receive rounds of golf for a foursome. Anyone who holes out on No. 14 from 159 yards like Weir did in his final round wins unlimited golf for the remainder of the 2020 season at Northview.

PGA OF BC CHAMP

Surrey’s Adam Svensson closed with a an even-par 72 and tied for 19th at 10-under par at the Korn Ferry Tour Championship in Newburgh, Ind. That was eight shots behind winner Brandon Wu of Fremont, Calif. Vancouver’s Stuart Macdonald tied for 59th at four-under after closing with a 73.