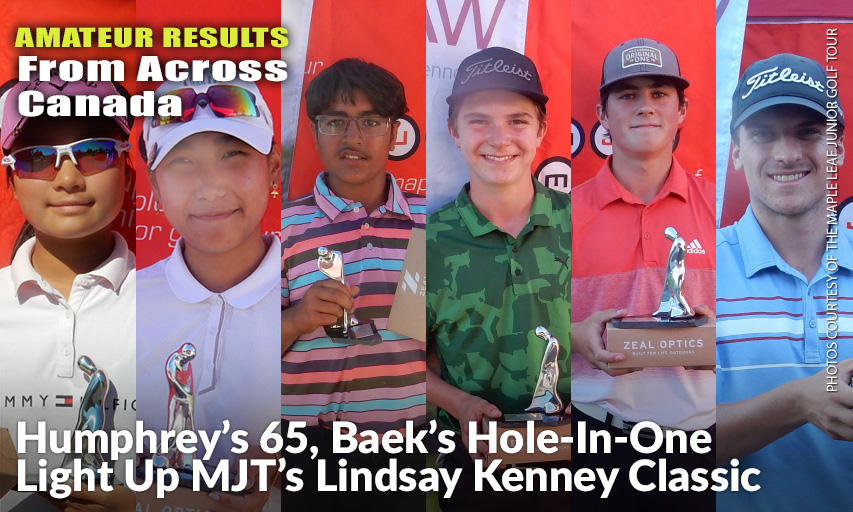 LANGLEY, British Columbia — Great conditions led to some spectacular results in the Maple Leaf Junior Golf Tour’s MJT Lindsay Kenney Classic at Pagoda Ridge Golf Club in Langley on August 27 and 28. Incredible scores such as 65 and a hole-in-one were recorded out of the wait-listed field of young golfers, who were competing under new health and safety protocols for titles in six divisions as well as the chance to qualify via order of merit for the prestigious MJT National Championship presented by TaylorMade and adidas Golf at Morgan Creek Golf Club in Surrey, BC, this October.

Cooper Humphreys, 15, of Kelowna, BC, had another amazing performance in the MJT Juvenile Boys Division, landing the LK Law Classic Low Overall title. The star player fired 72 followed by a brilliant 65 on day two for a seven-under-par total of 137 at Pagoda Ridge. Humphreys made 11 birdies over the 36 holes including six in his very last nine holes, stating, “My putting helped me and me being patient and not forcing anything. It feels good (to win).”

Two stellar under-par rounds for 18-year old Ilirian Zalli led him to his third consecutive MJT Junior Boys Division title in convincing fashion. The Vancouver, BC, player blazed his way around the course with scores of 69 and 70 (139). “It feels great, I played well,” commented Zalli, whose ambition is to take his talent to the MJT National Championship this year. “Although I had a horrible start, the key was to stay patient and believe that I had more opportunities to play well.”

Returning to the top of the MJT Bantam Boys podium was 14-year old Justin Bjornson, of Surrey, BC. Bjornson, who has been battling an unfortunate injury for a good portion of the year, made his return known at Pagoda Ridge firing rounds of 71 and 74 (145) to win by two shots. “Being able to stay in the moment and make the right decisions was crucial this week,” said Bjornson, attributing much of his win to his game management. “It feels awesome (to win)!” Also highlighting the division was a hole in one on the eighth hole at Pagoda Ridge on the first day by 13-year-old Coquitlam, BC, golfer, Roy Baek, who finished in seventh place.

Surrey’s Sukhraj Singh Gill, 12, carded 75 and 74 (149) to break through and win the MJT Peewee Boys Division title. Gill made five birdies over the two days and now made his way back into the winner’s circle after hovering around the top of the leaderboard this year on the MJT. He attributed his victory to “the practice I did with my dad,’ adding, “It feels really good that I won.”

It was all smiles in the MJT Girls 15-19 Division as Lucy Park won her first MJT title since beginning to compete in 2017. The 18-year old golfer from Abbotsford, BC, has been developing spectacularly on the MJT over the last four years and pushed her way to victory at this event, firing scores of 73 and 76 (149) including four birdies. “I stayed calm with great playing partners and thankful for the great support from my parents and coach,” Park said. “My hard work finally paid off and I am super happy.”

Completing the comeback in the MJT Girls U15 Division was Ha Young Chang, who is making the transition from the Mini Tour to the Junior Tour. The 12-year old Surrey rising star shot rock solid scores of 80 and 71 (151), making five birdies on the second day alone to come back from a one-shot deficit. “My key was managing the golf course,” said Chang. “It feels amazing as this is my first Junior Tour victory.”

Full results from the event can be viewed here. The next Maple Leaf Junior Golf Tour stop in BC is the wait-listed MJT Ford Series at Chilliwack Golf and Country Club in Chilliwack on September 3 and 4. More information is available at www.maplejt.com.

About LK Law
LK Law can assist with virtually every legal need and, through their affiliation with Mackrell International, they can provide legal services virtually everywhere in the world. LK Law works in teams across both locations – Vancouver and Langley – to serve their clients’ unique needs throughout the Lower Mainland and Fraser Valley of BC.  Please see www.lklaw.ca.