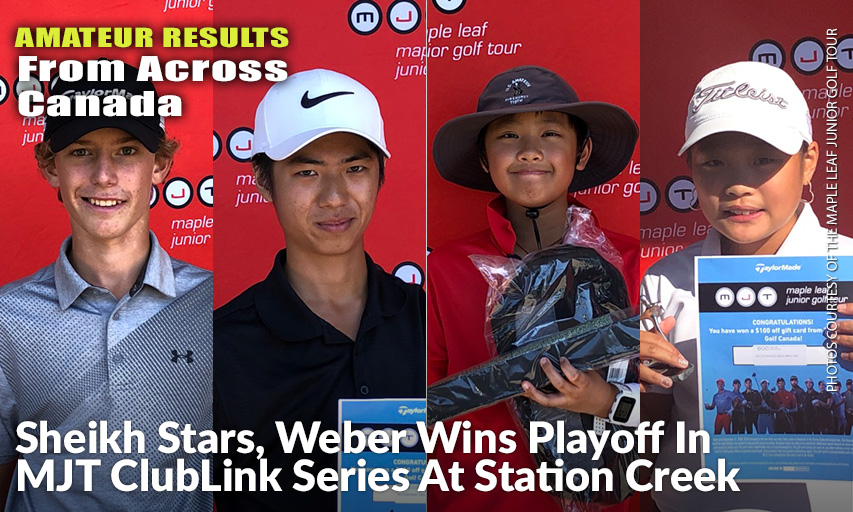 GORMLEY, Ontario — The Maple Leaf Junior Golf Tour’s Ontario season continued with the MJT ClubLink Series at Station Creek Golf Club in Gormley on August 30 and 31, where a full field of top juniors were competing for titles in six divisions. Continuing to operate under key player health and safety protocols on Canada’s number one-played Junior Tour, the two-day competition featured some fine scoring as well as a playoff.

Triumphing in the MJT Girls 15-19 Division was 17-year old Raesa Sheikh. The Caledon, ON, golfer has made appearances on the MJT over the last seven years and broke through to win her first MJT title after firing scores of 74 and 75 (149) for a one-shot victory. Sheikh had a one-shot lead after day one but saw that in jeopardy mid-way through the second round. She bared down and played her final five holes at even-par, included a crucial par on the 18th hole for the win.

10-year old Nobelle Park of Oakville, ON, took home the Hoselton trophy in the MJT Girls U15 Division. The rising star fired rounds of 80 and 77 (157) to win the title in commanding fashion. “It feels like a great accomplishment,” remarked Park, when asked about her win. “I stayed focused and kept a positive attitude.”

The MJT Junior Boys Division featured a playoff between Burlington, ON, golfer Michael Weber (142), 16, and Richmond Hill, ON, golfer Kavith Ranchagoda (142). The first round of the event saw Weber take a one-shot lead over the field with a round of 70 while Ranchagoda was sitting tied for second with three other players with a round of 71. The second round saw the lead shift between a number of players, but an even-par back nine by Ranchagoda to shoot 71 and an 18th hole birdie by Weber to shoot 72 forced extra holes. It was Weber who emerged victorious from the playoff to earn his first 2020 MJT title. “I stayed calm after a few unlucky breaks,” commented Weber. “I hit some very clutch shots down the stretch.”

15-year old Kevin Lee, of Markham, ON, held on for the Hoselton trophy in the MJT Juvenile Boys Division. Lee opened the competition with a 70 and a two-shot lead over a jam-packed leaderboard. He managed to hold on and win the division by two shots with a second round of 73 (143). “I was hitting my shots in good positions,” commented Lee, who cited his efforts on his approach game. “I was then able to get some great looks for birdie.”

14-year old Vincent LaPointe fired 73 and 75 (148) to win the MJT Bantam Boys Division by four shots. The Sutherland, ON, resident had a two-shot lead going into the second round and had a near perfect start, making birdie on the first two holes. LaPointe, playing in his first year on the MJT, picked up his first win with his performance at Station Creek Golf Club.

The MJT Peewee Boys Division saw Eddie Gu of Aurora, ON, take it low on the second day to win his second consecutive MJT title on the Junior Tour. The 10-year old player fired an opening round of 76 and propelled himself away from the field with a final round of 68, including four birdies. “The MJT has really helped me improve my game,” remarked Gu, who has been a force on the MJT this year racking up six total wins.

Full results from the event can be viewed here. The next event on the 2020 Ontario schedule, the wait--listed MJT TaylorMade Junior Championship at Grey Silo Golf Club, will be held in Waterloo on September 5 and 6. More information is available at www.maplejt.com.

About ClubLink Corporation
ClubLink is engaged in golf club operations under the trademark, “ClubLink One Membership More Golf.” ClubLink is Canada’s largest owner and operator of golf clubs with 53.5 18-hole equivalent championship and 3.5 18-hole equivalent academy courses at 41 locations in Ontario, Quebec and Florida.  A ClubLink membership gives you access to every course in the ClubLink family. Simply choose a Home Club that suits your needs from a location and lifestyle perspective. It’s where you will enjoy preferred access to tee times, participate in club events and play the majority of your golf. But no matter which Home Club you select, you’ve opened the door to every course in the ClubLink family. Click here to visit the ClubLink website.