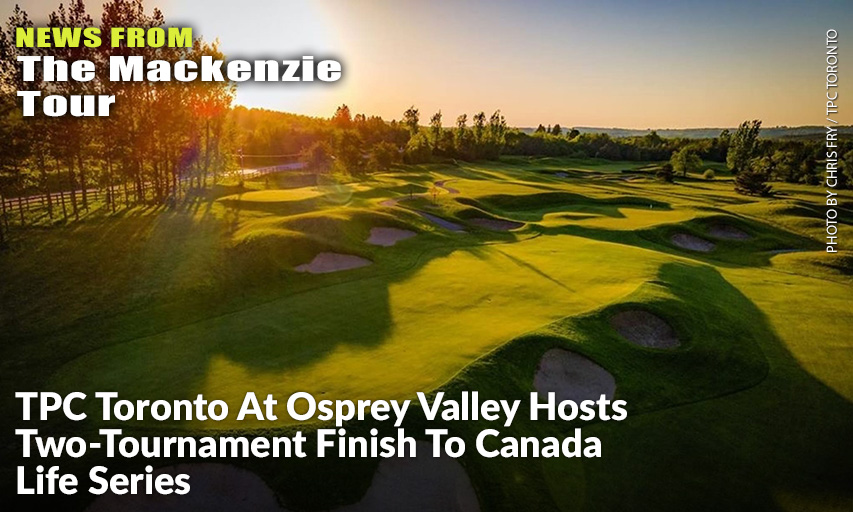 CALEDON, Ontario — After a one-week break in the schedule that allowed players to travel from the West Coast of Canada across the country, the Mackenzie Tour’s Canada Life Series resumes action this week, with play at TPC Toronto at Osprey Valley getting underway Wednesday morning. This is the third of four tournaments.

Many Mackenzie Tour and Eastern Canada players are familiar with TPC Toronto at Osprey Valley, a 54-hole facility just outside Toronto. The facility was set to host the 2020 Osprey Valley Open presented by Votorantim Cimentos CBM Aggregates in early July issues related to the COVID-19 pandemic forced Tour officials to cancel the season. A year ago, Player of the Year and current Korn Ferry Tour player Paul Barjon outlasted Canadian Taylor Pendrith by three strokes to win the Osprey Valley Open. The circuit’s best players performed well there last year. Besides Barjon and Pendrith, Jake Knapp (third place), David Pastore (fourth), Hayden Buckley and Jared Wolfe (tied for fifth) and Greyson Sigg (tied for seventh) all moved on to the Korn Ferry Tour for the 2020 season.

In 2018, the first year of the Osprey Valley Open, PGA TOUR member and that season’s Player of the Year, Tyler McCumber, defeated Michael Gellerman by a shot. Gellerman, too, is a current PGA TOUR member.

The Heathlands Course opened in 1992, with the entire facility becoming the first TPC Property in Canada, beginning in 2018. The Doug Carrick design reflects a Scottish links feel, with dune-swept hills covered in fescue grass and strategically placed bunkers throughout all 18 holes. The par-71 layout measures 6,810 yards and features five par-3s—three on the back nine.

This week, 120 players are in the field, with several competing for the first time. Included is Garrett Rank, a National Hockey League referee who won the 2019 Western Amateur and has reached as high as No. 25 in the World Amateur Golf Ranking. Hugo Bernard is also making his Canada Life Series debut. He is in his second season as a professional, playing primarily on the Mackenzie Tour in 2019 but also seeing action on PGA TOUR Latinoamérica.

Continuing this week is the Canada Life Birdies for Kids initiative, with Canada Life donating $5 for every birdie players make this week and $20 for each eagle. Money donated at the first two events supported Canucks Autism Network. For the next two weeks, proceeds will go to Start2Finish, an organization that provides ongoing educational support to Canada’s at-risk children throughout their school years, nurturing mind, body and social health so they are empowered to graduate and succeed.

Action begins Wednesday at 8 a.m. Points List leader Cao is playing the first two days with Derek Gillespie and Bernard, that group teeing off at 8:10 a.m.