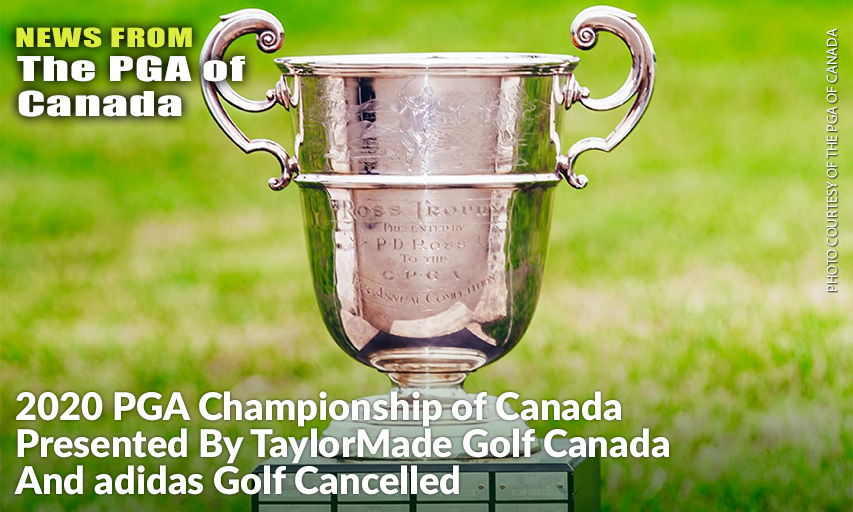 ACTON, Ontario — The PGA of Canada, along with TaylorMade Golf Canada and adidas Golf, has made the difficult decision to cancel the 2020 PGA Championship of Canada given continued health concerns and travel restrictions surrounding COVID-19.

The association’s flagship event was originally scheduled from July 6-10 at Edmonton’s Royal Mayfair Golf Club and later postponed in June due to the coronavirus pandemic.

“This decision has been made with the health and safety of players, volunteers and staff in mind,” said PGA of Canada President Teejay Alderdice. “We were cautiously optimistic in the spring that conditions might improve to a point where we could conduct the championship safely and at a level players expect. Ultimately, ongoing travel restrictions and risks associated with bringing a national field together during COVID-19 influenced the cancellation of this event.”

In addition to the national tournament, TaylorMade Golf Canada and adidas Golf support championships across all nine PGA of Canada Zones. Winners from both 2019 and 2020 Zone Championships will earn a coveted exemption into next year’s event as a result of the cancellation this year.

The PGA of Canada and its partners now look to 2021 to deliver an exceptional experience for members at the 99th-playing of the historic national championship.

“Golf professionals are the core of the industry,” said David Bradley, general manager at TaylorMade Golf Canada. “We are pleased to work with the PGA of Canada to offer competitive opportunities at the Zone level this season and look forward to supporting a fantastic national championship in 2021.”

“This is a top-tier event in Canada and one we are certainly proud to be a part of,” said adidas Golf General Manager Lesley Hawkins. “Our team is excited to raise the bar next year with the PGA of Canada for what promises to be a thrilling return.”

The PGA of Canada Player Rankings presented by RBC were paused in June given the impact of the coronavirus pandemic on events across the country.

Past PGA Championship of Canada winner Pierre-Alexandre Bedard of Chibougamau, Que., will hold on to his No. 1 ranking heading into next year, earning him a spot in the '21 RBC Canadian Open at St. George’s Golf & Country Club.

The date and location of next year’s PGA Championship of Canada presented by TaylorMade Golf Canada and adidas Golf will be announced toward the end of 2020.