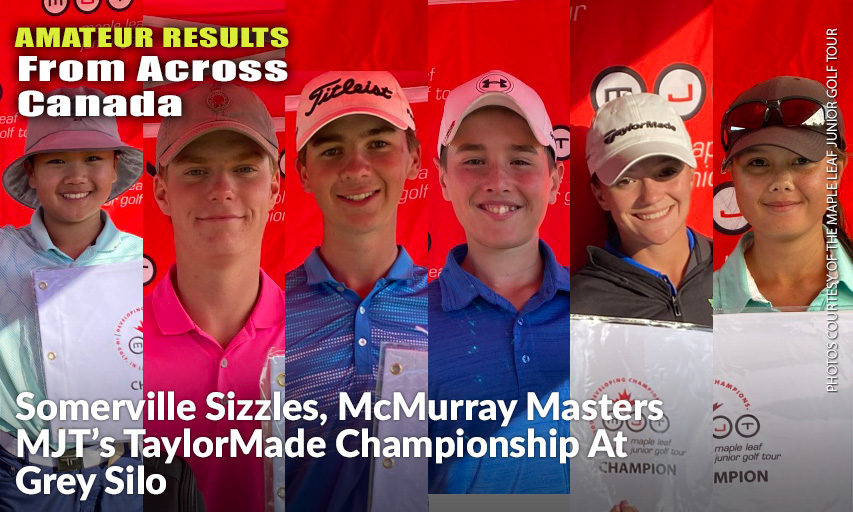 The MJT TaylorMade Low Overall champion was Ryan Somerville, 16, of Aurora, ON. Somerville, who is no stranger to the top of the podium, showed some incredible poise and talent in the MJT Juvenile Boys Division. Somerville opened the competition with a bogey-free round of 67 which included four birdies. He followed that up making three more birdies in his second round on his way to a 70 (137) and a convincing win. “My wedge shots were very good this week,” he said. “It feels great (to win). The MJT does a great job, especially during COVID-19.”

Oakville, ON’s Alexis McMurray picked up her first 2020 MJT win with her performance at Grey Silo. The 17-year-old golfer fired a pair of 72’s (144) to win the MJT Girls 15-19 TaylorMade Championship title by four shots. “It feels great and reassuring because this season has been difficult and everyone has had to overcome our new reality,” she said. “I love playing with all of my friends and the sponsors are amazing.”

17-year-old golfers Zach Burt, of Guelph, ON, and Graem Costigan, of Cambridge, ON, finished tied after 36 holes of play in the MJT Junior Boys Division. Burt fired scores of 75 and 71 (146), clawing back from a deficit, while Costigan shot consistent rounds of 73 (146) to force a playoff. Playing the 18th hole at Grey Silo one more time, it was Costigan’s par that was enough to seal the deal for the MJT TaylorMade Junior Boys Championship title. “I really struck the ball well today,” said Costigan. “It feels good, gives me a confidence boost, and is a good way to end the season.”

14-year-old Tara O’Connor continues to star on the MJT recording her sixth consecutive win at Grey Silo Golf Club. The Guelph, ON, golfer shot 71 and 76 (147) to win the MJT Girls U15 TaylorMade Championship title by six shots. “I am happy to shoot my lowest two-day score in MJT’s this season,” she said afterwards. “I hit most greens and hit every fairway.” O’Connor will be looking to take her talents next to the national stage in October, teeing it up against Canada’s best at one of the largest and most prestigious junior golf events in Canada.

Toronto, ON’s Eric Zhao, 12, picked up the TaylorMade Championship Hoselton trophy in the MJT Bantam Boys Division after shooting great scores of 71 and 75 (146). Zhao recorded six birdies over the 36 holes on his way to a four-shot victory. “Even though I was plus five on the front I stayed calm,” he said. “I feel good and relieved after a stressful match. Thanks for hosting this event.”

The MJT Peewee Boys Division witnessed 11-year-old Brayden Card come from behind to win his second 2020 MJT Junior Tour title. Card, who resides in Cambridge, opened the competition with a 77 and sat in a two-shot deficit. Card fought back on the second day making three birdies, two of those coming in the last three holes, to shoot a 69 (146) and win the MJT TaylorMade Championship division title by two shots. “Key was staying calm and not getting ahead of myself,” he stated. “It feels good ‘cause I have come way too close and now to win feels great.”

The next MJT event in the province is the coach-attended, invitational MJT National Team Challenge presented by Freedom 55 Financial at Royal Niagara Golf Club in Niagara, ON, which will take place September 18-20. More information can be found at www.maplejt.com.