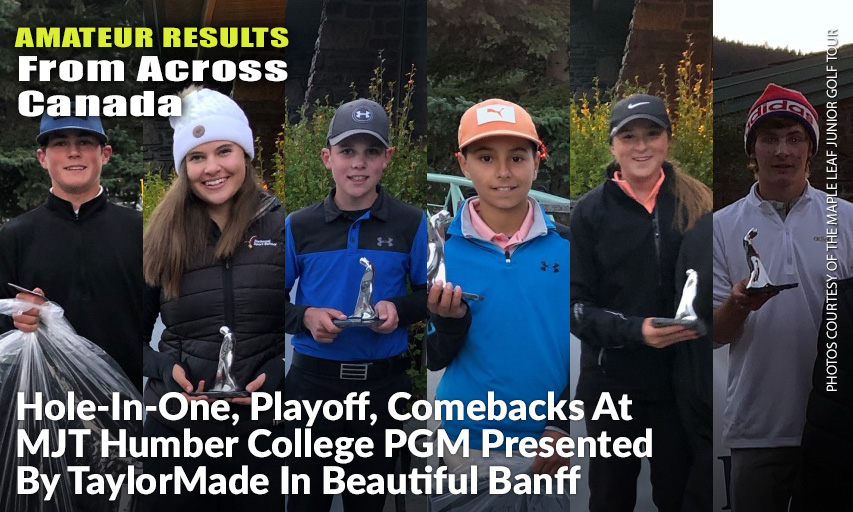 BANFF, Alberta — The scenic town of Banff, AB, hosted the Maple Leaf Junior Golf Tour on September 6 and 7, where a full field of elite young golfers competed for titles under continuing player health and safety protocols in the MJT Humber College PGM presented by TaylorMade at Fairmont Banff Springs Golf Club, an event highlighted by comeback performances, a playoff, and a hole-in-one by Ben Lehmann, 16, of Calgary, AB, on the 13th hole.

One of the biggest comebacks of the tournament came from 15-year-old Cooper Humphreys in the MJT Juvenile Boys Division. The Kelowna, BC, golfer has dominated on the MJT BC circuit all season and brought his talent out to Alberta where he continued to shine. Humphreys struggled to get things going on the first day, carding a 76 which put himself five shots back of the lead. He turned up the heat in the second round, firing a brilliant 67 (143) with five birdies, to surge ahead and win the MJT Humber College PGM presented by TaylorMade Low Overall title. “It feels good (to win) because I had a crazy bad round the first day,” remarked Humphreys. “I stayed patient and didn’t force anything. I had a lot of fun.” Humphreys earned his fifth consecutive 2020 MJT win with his performance at Fairmont Banff Springs.

After 36 holes of play, 17-year-old golfers Thomas Sluka (72, 74 – 146), of Canmore, AB, and Braden O’Grady (69, 77 – 146), of Edmonton, AB, finished tied at the top of the leaderboard in the MJT Junior Boys Division. After charging back from a three-shot deficit on the second day, it was Sluka who completed the comeback winning the division in the playoff. “It’s been a long year and getting my first MJT win in my last event feels great,” commented Sluka.

17-year-old Grace Bell picked up her third MJT win of the season in the Girls 15-19 Division at Fairmont Banff Springs. The Calgary, AB, golfer fired 76 and 73 (149), coming back from a three-shot deficit after the first day. Bell closed the competition in style playing her final nine holes at even par, exactly what was needed to take the Hoselton trophy. “I was making some putts on the back nine,” commented Bell when asked about the key to her victory. “It feels good to get another win this year.”

Calgary’s Charlie Gillespie continued with the theme of comebacks earning a three-shot victory with his performance in the MJT Bantam Boys Division. The 13-year-old golfer relied on his consistency for the win recording a pair of 73s (146) to win after being down by three shots after the first day. “It was so much fun to play in Banff,” commented Gillespie. “I hit some good shots and made some putts.”

Jayla Kucy, 14, of Camrose, AB, was the only division wire-to-wire winner. Kucy opened the competition with a round of 73, playing consistent golf with an eagle and one birdie. That gave Kucy enough of a cushion to hold on for the win after a second round of 77 (150). “I tried to get on the par fives in two,” commented Kucy, who used her distance advantage well over the long weekend.

Rounding out the comebacks was 12-year-old Joshua Laverdiere, of Kelowna, in the MJT Peewee Boys Division. Laverdiere fired a first round of 82 to sit in fourth place and three shots back of the lead. He dug deep and carded a second round of 76 (158) for a one-shot win. “I took a little more risk today and it paid off,” commented Laverdiere. “It feels great to win especially when there are other great players [in the field].”

Full results from the event can be viewed here. The final stop on the 2020 MJT Alberta schedule – the MJT Ford Series at RedTail Landing Golf Club – will take place in Nisku on September 12 and 13. More information can be found at www.maplejt.com.

About Humber College PGM Program
Humber College’s Business Administration - Professional Golf Management program is a Recognized PGA of Canada program. Gain a business education, develop your golf game, and embark on a career you will love. Gain valuable experience and earn income during our two 6-month paid co-op terms. Our on-campus Golf Lab is a world-class golf performance training facility run by PGA Professionals. Our Golf Lab is equipped with three Simulator Rooms, a Golf Retail Shop, Golf Club Workshop, and 2000 square feet of putting surface. Our students have the opportunity to play on the Humber Hawks varsity golf team, the most decorated golf team in Canada. For more information please visit our website at business.humber.ca/golf.