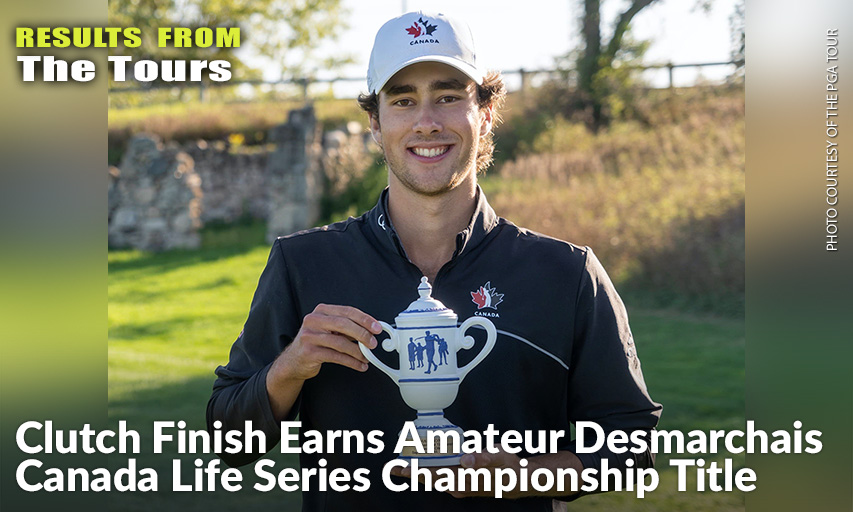 CALEDON, Ontario — It was a wild back nine for Laurent Desmarchais during the final round of the season-ending Canada Life Series Championship at TPC Toronto at Osprey Valley. The amateur made four birdies and two bogeys to go with two pars—none bigger than the 10-footer he rolled in on the final hole to shoot a final-round 67 that gave him a one-shot triumph over Callum Davison. While he doesn’t get to cash the first-prize check of $9,000, Desmarchais can walk away knowing he was the best player this week, winning his first pro tournament with a wire-to-wire performance.

“I don't even have words right now. I made a few big putts down the stretch,” he said.

Desmarchais took control of the tournament with birdies at Nos. 15 and 16, taking a two-shot lead with two holes to play. He made things tough on himself, though, with a bogey at the 17th hole. If there ever were a good bogey, however, that was it. His tee shot landed 20 feet over the green, long and left. Desmarchais tried to hit his second shot into the slope and roll the ball onto the green, but instead the ball rolled back into the collection area. Desmarchais putted up the hill for his third shot, barely getting over the ridge and onto the green. He then rolled in a 10-footer that just crept into the hole.

Things didn’t get any easier on the par-4 closing hole. Desmarchais missed the green with his second-shot approach and had an awkward lie, the ball in front of the green but on a downward slope. He elected to putt from there, and left his birdie try 10 feet short. He calmly rolled the putt, the ball clanking against the flagstick and dropping into the hole for the par and the win.

“I was quite nervous on the last few holes. My tee shot on 17 flew like 20 yards over the green, which I still don’t quite understand, but I made two big putts—one for bogey on 17 and one for par on 18. It’s just insane,” Desmarchais explained. “It’s big for my confidence knowing I can make those putts. Just winning this event is huge for my confidence and for my game.”

Davison made things interesting with his final-round 65 that included three birdies over his last five holes, the capper a birdie on the 18th that allowed him to post in the clubhouse at 16-under. It wasn’t quite enough, and Davison’s bogey on the par-3 17th will haunt him as he, like Desmarchais, was unable to get up and down for par, missing a six-footer. The only consolation is Davison receives the $9,000 first prize as the top-finishing professional.

For a while, Blair Bursey looked like he might make a run at the title when he made three consecutive birdies to begin his back nine, getting to 14-under. He fell into neutral after that, closing the Series with five pars and a 54th-hole bogey. He finished at 13-under and tied for fourth.

All week, though, Desmarchais, the Golf Canada Junior Squad Member and University of Tennessee commit, was the player to beat when he opened the tournament with a 9-under 62. Consecutive 67s to finish the week sealed the deal for the 19-year-old native of Quebec. He ended fourth on the final Canada Life Points List.

Yi Cao was one stroke better than Albert Pistorius on Friday, and that allowed Cao to finish No. 1 on the Canada Life Points List. By virtue of that distinction, Cao earns a playing spot in the 2021 RBC Canadian Open on the PGA TOUR. The invitation is courtesy of Golf Canada. He also earns conditional 2021 Mackenzie Tour status and six guaranteed tournament starts. Pistorius finished second, followed by Evan Holmes, Laurent Desmarchais and Callum Davison. Those four players also earn conditional Mackenzie Tour status and two guaranteed 2021 tournament starts.

All six amateurs in the field this week made the cut, led by champion Laurent Desmarchais. The others were Matthew Anderson (tied for 26th), Cougar Collins (tied for 33rd), Jordan Crampton (tied for 37th), Freddy D’Angelo (tied for 44th) and Nolan Piazza (63rd).

With Laurent Desmarchais set to enroll at the University of Tennessee, where he will play college golf, three other amateurs are already playing for U.S. colleges. Matthew Anderson plays at the University of San Francisco, Cougar Collins plays at Eastern Michigan and Freddy D’Angelo is on the Oakland (Michigan) University golf team. Anderson is already acquainted with PGA TOUR-sanctioned golf, having qualified to play in the 2019 RBC Canadian Open, where he missed the cut.

Yi Cao and Albert Pistorius were the only two players to record top-10s in all four tournaments. Callum Davison and Joey Savoie both had three top-10s.

As an amateur, Laurent Desmarchais was ineligible to win the $2,750 bonus bursary this week for the low 18-hole round. Instead, the money went to Hugo Bernard for his second-round 63. The money is courtesy of past and present PGA TOUR players: Stephen Ames, Corey Conners, Graham DeLaet, Michael Gligic, Adam Hadwin, David Hearn, Mackenzie Hughes, Ian Leggatt, Roger Sloan, Nick Taylor and Mike Weir.

Not surprisingly, amateur Laurent Desmarchais led the field, with 20 birdies. That set the standard for most birdies in a Canada Life Series tournament this year, easily outdistancing the 17 Joey Savoie made at the second Bear Mountain event.

In all four Canada Life Series tournaments, the second-round leader closed the deal and went on to win. Evan Holmes, Yi Cao and this week’s winner, Laurent Desmarchais, all held the lead outright going into the final round, while last week’s champion, Albert Pistorius, shared the 36-hole advantage with Cao, Andrew J. Funk and Brendan Leonard.

Sebastian Szirmak can only wonder what if about his final round. Despite shooting a 6-under 65—a best-of-the-day-honor he shared with Callum Davison—a double bogey-7 at the par-5 ninth hole in the end essentially ended any chance Szirmak had of winning. Still, his 65 with a double bogey may have been the most impressive round of the day, a scorecard that featured eagles at Nos. 1 and 10 and four additional birdies. Szirmak finished alone in third, his best performance of his four appearances. His previous top showing was a tie for 26th in the second Bear Mountain tournament.

With his two eagles Friday, Sebastian Szirmak joined Zach Anderson, Michael Blair, Patrick Murphy, Brett Webster and Keaton Veillette as players with a pair of eagles in one round during the Canada Life Series season.

David Sheman last played a Mackenzie Tour tournament in 2015, and he hadn’t played any of the previous three Canada Life Series tournaments. All Sheman did this week was shoot rounds of 69-65-68, good for a seventh-place finish. He was one of 13 players to shoot three sub-70 scores.

Matthew Scobie had an impressive tournament, moving up 17 spots on the leaderboard into a tie for 12th by shooting a final-round 66. He turned in a reverse of what he did in his Series debut last week at TPC Toronto. After opening with a 3-under 68, Scobie shot a 71 followed by a 75 to tie for 24th. This week, Scobie got better each day, starting with a 71 and closing 67-66.

The par-4 18th hole was the most difficult on the final day at TPC Toronto. There were only 10 birdies against 18 bogeys and five “others.” The first hole was again the easiest. It yielded five eagles, 42 birdies and no bogeys.

There were 234 birdies and 15 eagles Friday, with $1,915 earned for charity. For each birdie a player made the four-event Canada Life Series, Canada Life donated $5 through its Birdies for Kids initiative. In addition, Canada Life donated $20 for every eagle. The total donation from the four events amounted to $30,435. Money donated from the four tournaments benefitted Start2Finish, an organization that provides ongoing educational support to Canada’s at-risk children throughout their school years, nurturing mind, body and social health so they are empowered to graduate and succeed. At the Series’ first two tournaments, money earned went to Canucks Autism Network.

“It’s really big. I just want to thank Golf Canada and my coaches, Robert Ratcliffe and Daniel Langevin, who were a big part of this win. Even if I hit the putts, they were right there with me.” –Laurent Desmarchais

"They were pretty confident at the beginning. They kind of joked, 'We’re gonna catch you,' but I'm really proud that I was able to beat them. They're both great players.” Laurent Desmarchais

“It was big to get off to a good start today. I had a few really good guys chasing me, and I knew that I would have to start strong, and so making those three birdies on my first four holes was really big. It just got me going, and I kept hitting good shots.” –Laurent Desmarchais

“It’s huge for my career. These are the only four events I played all season, and these players are really good. I would say whether it’s me or Albert, it’s a great opportunity.” –Yi Cao on his Canada Life Points List battle with Albert Pistorius

“I tried not to think about it at the start of the day, but I just couldn’t. It’s even harder than trying to win the tournament because you play your best and just have to see what happens next.” -Yi Cao on thinking about winning the Points List title

“I’ll never forget this moment because from the first tee all the way to the 18th hole, I was pretty calm. Down the stretch I knew I had to make some good scores. Unfortunately, all the putts seemed to lip out, but it was such a special experience.” –Yi Cao