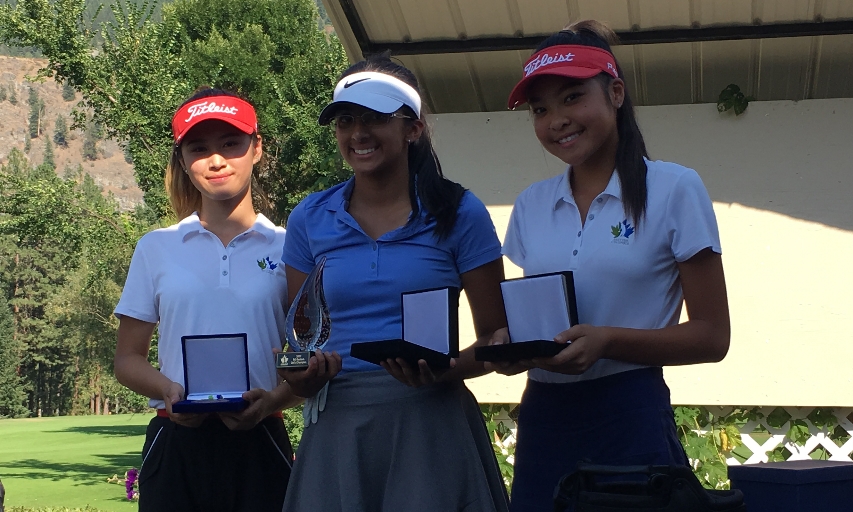 Surrey's Angela Arora (Centre) Is The B.C. Bantam Girls Champion While Jennifer Gu Of West Vancouver (L) Was Shot Back In 2nd, With Sherri Yang Of Richmond (R) In Third. (BC Golf/Susan White)

(Brad Ziemer/British Columbia Golf) — Angela Arora fully expected to win the B.C. Bantam Girls Championship, but not until next year. The 13-year-old from Surrey really didn’t think her game would be good enough for a provincial championship until she was 14. Turns out she was wrong.

Arora sank a clutch 10-foot putt for par on the 18th hole at Christina Lake Golf Club on Tuesday to win the Bantam Girls title by one shot over Jennifer Gu of West Vancouver.

Arora played in her first B.C. Bantam Girls Championship -- open to players 14 and under as of August 1st -- last summer at Bowen Island Golf Club and the then 12-year-old finished in the bottom half of the field, 26 shots behind the winner. She thought in a couple of years’ time she would be ready to win the event.

“It feels amazing because I am 13 years old and I feel like I have improved so much this year,” Arora said. “My goal after last year’s tournament was to win this tournament when I was 14. So to achieve that goal early feels really great.”

Arora shot a two-over 74 in Tuesday’s final round to finish the 36-hole event at five-over par. Gu, playing in the group ahead of Arora, carded the day’s best score, a one-over 73, to finish one shot back.
“I knew Jennifer would shoot a low round because she is an amazing golfer,” Arora said.

“I was actually even-par for my round with three holes to go and I was feeling pretty confident, but then I went bogey-bogey on 16 and 17. On 18 I didn’t really hit a good drive or a good second shot and then I smashed my putt long. So I knew I had to sink this 10-footer for par or I would be in a playoff and I made it. It felt really great.”

Arora is heading into Grade 8 at Frank Hurt Secondary and plays out of Nico-Wynd Golf Course in Surrey. She has been playing competitive golf for about two years. Arora said a consistent driver played a bit part in her win Tuesday. “I think my driver was pretty strong,” she said. “This course required a lot of accurate drives because some of the fairways are quite narrow. And today I was making a lot of putts. I birdied No. 3 from about 20 feet and sunk another long putt on the 13th hole and then I made that 10-footer on the last hole.”

First-round leader Sherri Yang of Richmond shot a 78 Tuesday and finished third at eight-over par. Langley’s Chaewon Baek finished fourth at 12-over. Arora said she was still getting used to the fact she is now a B.C. champion. “It feels amazing,” she said. “I feel like this is a great start to my career. I have won tournaments, but this is by far my biggest win. I want to keep having wins like this and having the confidence to do it. Now I can call myself a B.C. Bantam Girls Champion!”

Asked how she was going to celebrate the big win, Arora laughed and said: “We are going to go home now and have some ice cream.”

CHIP SHOTS: Cadence Ko of Richmond won the Novice Championship for players with higher handicaps with a Stableford score of 77 points.