A Quality Winner, But A Quiet Crowd For The Playoffs 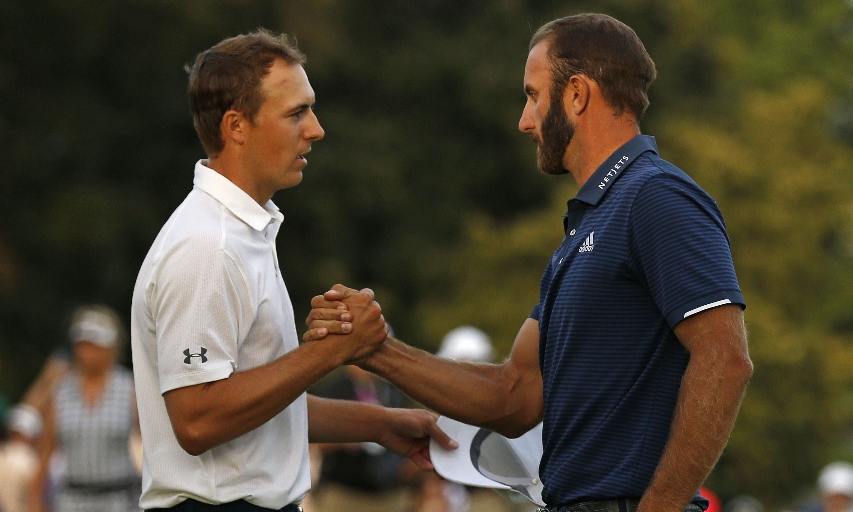 OLD WESTBURY, New York (Doug Ferguson/AP) — The PGA Tour began the second decade of its postseason with a winner that matched the quality of the FedEx Cup playoffs, and a celebration that matched the atmosphere.

That was good news on only one front.

Dustin Johnson holed an 18-foot par putt to force a playoff in The Northern Trust, and then he smashed a 341-yard drive over the water to set up a birdie that allowed him to beat Jordan Spieth.

The star power can’t get any better. It also extended an amazing run of winners in these FedEx Cup playoff events dating to 2015 — two victories by Johnson, two by Rory McIlroy, two by Jason Day and one each by Spieth, Rickie Fowler and Patrick Reed.

As for the celebration?

“That was a weak fist pump,” Johnson said.

For his standards, it was an amazing display of public emotion. The occasion was that make-or-lose par putt on the 18th hole at Glen Oaks Club that never looked like it was going in until gravity took over as it spun around the back side of the hole. Johnson took two steps to the right, then clenched his fist and gave it a half-thrust.

Take his word for that.

The fans were excited, too. There just wasn’t very many of them.

It was hard to ignore the lack of buzz at private Glen Oaks Club, located in an elite section of Long Island about 15 minutes away from Bethpage Black. The weekend held great promise for entertainment, with Johnson in the final group and Spieth and Fowler right in front of him. The crowds were thin and relatively muted. Sunday was not much different, even with Johnson and Spieth in what amounted to a four-hour duel.

Moments like that at Bethpage Black, and at Ridgewood or Plainfield in New Jersey, would have attracted a gallery that stood three-deep or more. On this occasion, the crowd was barely two-deep and surrounded only the green, or halfway down the fairway.

Glen Oaks filled in this year because the Presidents Cup will be played next month across from Manhattan at Liberty National, which already has hosted the FedEx Cup opener twice. Too much golf too soon for one area? Not in greater New York.

Another theory was that it was a bad date with summer winding down, though that wouldn’t explain the big crowds at Bethpage last year or in 2012 on the same date. Perhaps it’s because Long Island is limited in its reach compared with New Jersey. Or that not enough people on Long Island know about Glen Oaks to be inspired to take long shuttles into a club so private that access was shut off to any type of taxi service.

The course was beautifully manicured and pleasing to play. There was never going to be many complaints from players.

Whether it returns depends on if the PGA Tour wants to risk another low turnout for its most important stretch of golf. Noise is one of the most underrated aspects of golf, and one only has to look back at Erin Hills for the U.S. Open — where fans were kept some 80 yards away from the action — to appreciate that.

The TPC Boston, site of next week’s event, typically is raucous over the Labor Day weekend. Still to be determined is whether that’s still the case this year, knowing that the Dell Technologies Championship is on its last week, as the tour heads toward eliminating one of its playoff events to try to finish before the NFL begins.

The quality of golf remains high, dismissing any notion that players are ready to pack it in after the majors are over.

McIlroy is looking forward to the season being over because he needs a break following a year of injury, lack of practice and ordinary results. Ditto for Bubba Watson, though he marches to a different beat for any occasion. Those who don’t want to be playing are either not playing very well or don’t have as much incentive as the others.

Of the 41 playoff events, 25 have been won by major champions. All but four winners have played in the Ryder Cup or Presidents Cup.

“You start to get players that are playing very well,” Spieth said, “and to no surprise, those guys are toward the top.”