Dustin Johnson Gets Swagger Back At Northern Trust 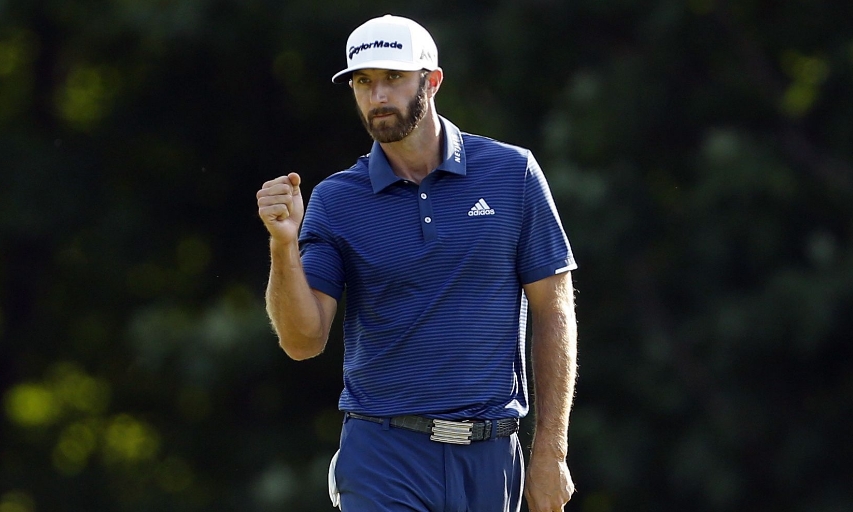 Dustin Johnson Reacts On The 15th Green After Making A Birdie Putt During The Final Round Of The Northern Trust. (AP Photo/Adam Hunger)

But he nearly took a step back.

Johnson removed his right shoe and slowly peeled off his sock to reveal white gauze wrapped around his fourth toe. That would explain why he was walking so slowly in the early rounds at The Northern Trust, sometimes 30 yards behind the rest of the group.

He was in the ocean and felt a light scrape on his foot. Once he was out of the water, he discovered his toenail had been sheared off to the skin just above the cuticle.

“No idea how it happened,” Johnson said. “I didn’t want to say anything about it. I didn’t want it to sound like an excuse.”

Besides, it only hurt to walk.

The golf swing, finally, looked better than ever. And for the first time in five months, Johnson had something to show for it.

His playoff victory over Jordan Spieth was his fourth of the year, and it might have been the most important because it was the next one. In late March, he looked practically unbeatable. By August, he was nearly forgotten except for his name at No. 1 in the world ranking.

Spieth was going for his third victory in his last five starts, one that would have made him tough to overlook for PGA Tour player of the year. He had it won until Johnson rolled in an 18-foot par putt on the final hole in regulation, and then hit a rocket off the 18th tee that left him a lob wedge into the green that set up the winning birdie.

Who needed the victory more?

“He just won the British, right?” Johnson said. “So he’s been playing really well. After I was playing so well at the beginning of the year ... yeah, I definitely needed it more than he did.”

As easy as he can make the game look at times, nothing ever comes easily to Johnson.

He doesn’t let on how much it can weigh on him, which should come as no surprise. One of the stories that emerged from his trip to the Bahamas was the sighting of the occasional bull shark while spearfishing. Johnson’s response was simply to surface and move the boat somewhere else.

There is rarely any sense of panic.

That was the case Sunday when he found himself five shots behind just five holes into the final round, right after Spieth poured in a 30-foot birdie putt. Asked what he was thinking going to the next tee, Johnson replied, “Well, I mean, nothing, really.”

What makes Johnson so suited for such a frustrating sport is his uncanny ability to see only what’s next instead of what’s happened.

Never mind the two-shot penalty on the 18th hole of the 2010 PGA Championship for grounding his club in a patch of sand that at Whistling Straits is called a bunker. Or the 12-foot eagle putt to win the 2015 U.S. Open that instead turned into a three-putt par on the bare greens of Chambers Bay.

His worst break might have been the combination of socks on a wooden staircase and a spill that wrenched his back and knocked him out of the Masters this year. His brother, Austin, heard the commotion and was the first one to reach him. He still remembers the look in his brother’s eyes as he lay crumpled at the base of the stairs.

Going into the British Open, Johnson conceded that getting back to where he was had become more difficult than getting there in the first place.

Is he all the way back?

It sure felt that way when he left Glen Oaks Club on Sunday with his 16th victory in 10 years on the PGA Tour. The first one was at Turning Stone, a fall event that no longer exists. Since then, he has won the U.S. Open, five World Golf Championships and four FedEx Cup playoff events.

He doesn’t make as many putts as Spieth — not many do — though he never feels as though his putting is far off. Johnson works hard at his wedge game to go along with his power, which comes naturally. On the range at Firestone earlier this month, he set the target at 115 yards with a goal of being within 5 yards on each shot. The first one registered on his Trackman at 115.7 yards. The next one was 115.5, followed by another one at 115.3.

Winning the FedEx Cup opener was a reminder how he got to No. 1 in the world in February and why he’s still there.

It also put him in the mix with Spieth and PGA champion Justin Thomas for PGA Tour player of the year. That’s determined by votes from the players, and without a major, Johnson might be a tough sell unless he was to win another playoff event, maybe two. It might take winning all three.