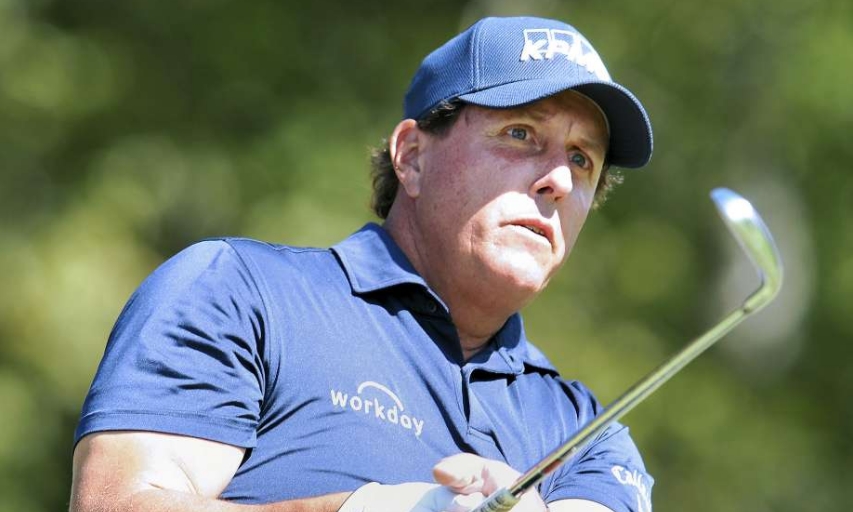 Phil Mickelson Tees Off On The 17th During The First Round Of The 2017 Dell Championship. (Mark Stockwell/The Sun Chronicle via AP)

NORTON, Massachusetts (Doug Ferguson/AP) — Phil Mickelson thinks he found what has been draining him of energy and focus for most of the year. Now it’s a matter of whether it can help him start posting better scores and possibly get on a U.S. team for the 23rd consecutive time.

Mickelson, winless since his British Open title in 2013 at Muirfield, said he saw a doctor after missing the cut in the PGA Championship. It’s the same doctor who has helped him manage the psoriatic arthritis he has had since 2010.

“He seemed to have found something,” Mickelson said Friday after opening with a 2-under 69 at the Dell Technologies Championship, leaving him three shots behind Dustin Johnson. “This is the best energy I’ve had throughout the round and the best focus. My short game has been very disappointing and I haven’t been able to visualize the shot I’ve been trying to hit.

“And today, and for probably the last few days, I’ve been able to see the shot again,” he said. “And so it was a good day.”

Mickelson first revealed he had arthritis ahead of the PGA Championship seven years ago, and he has managed to keep it under control. He was not specific about what the doctor discovered, only that he made a few changes “that seem to be helping.”

Mickelson, who turned 47 in June, said he has lost focus during rounds and felt low on energy for the last few years off and on.

“But specifically, the last six to eight month it’s been very difficult for me,” he said. “It’s been very frustrating to not be able to practice or visualize or see a shot or have that energy level. This last week or two has been a nice step up.”

Mickelson has played on every Presidents Cup team since it began in 1994, and every Ryder Cup team since 1995. Only twice in those 22 appearances has he had to rely on being a captain’s pick, including two years ago for the matches in South Korea.

He is No. 18 in the standings and would need a runner-up finish at the TPC Boston to have a mathematical chance of earning one of 10 automatic spots. U.S. captain Steve Stricker has said he wanted to see something from Mickelson over the final two weeks to feel good about taking him as a pick.

Mickelson didn’t take advantage of the par 5s at the TPC Boston, playing them in even par. He made bogey on the par-5 second hole when he left a shot in a fairway bunker. That happens. What encouraged him was saving par five other times when he missed the green.

“All the little chip shots ... I’m able to see the arc of the shot I’m trying to hit and have that picture in my head, which I have not been able to do,” he said.

One example was No. 15, which Mickelson has joked is a hole that has his number. Twice he has hit the pin with his approach shots. He missed the pin Friday, but the ball spun off the front of the green and back toward the fairway.

“A shot I’m very familiar with,” he said. “But that’s another example of what I was talking about, where I was able to visualize that chip shot and I knocked it up there tap-in distance. And I haven’t been doing that.”