Patrick Cantlay Doing The Most With A Limited Schedule 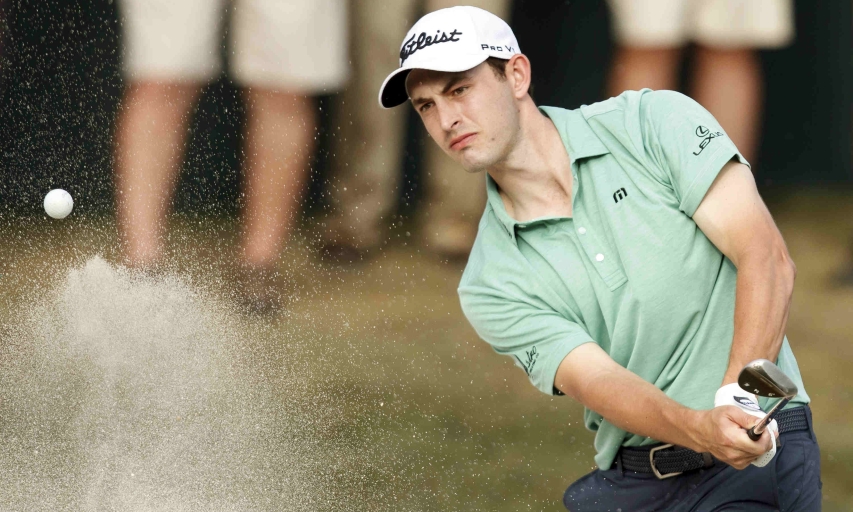 Patrick Cantlay Hits Out Of The Bunker On The 18th Hole During The Final Round Of The 2017 Valspar Championship. (AP Photo/Mike Carlson)

NORTON, Massachusetts (Doug Ferguson/AP) — To consider all that Patrick Cantlay has gone through over the last two years puts the quality of his season in a different light, and it looks even stronger because of his limited schedule.

He is No. 41 in the FedEx Cup despite having played only 11 tournaments.

“If he had the full year this year, I would imagine he’d have been on the Presidents Cup team, no question,” said Jordan Spieth, who competed against Cantlay in college and played with him in the third round at the TPC Boston. “He’s extremely talented, and he’s going to work his way up into the top 10 in the world, in my opinion.”

Cantlay first showed his promise on a big stage in 2011, right after his sophomore year at UCLA, when he was low amateur at the U.S. Open, shot 60 at the Travelers Championship and never finished out of the top 25 in the four PGA Tour events he played.

But his career was nearly derailed his rookie season in 2013 by a stress fracture in his lower back that kept out of golf for two years. During that time off, his best friend and caddie, Chris Roth, was struck by a car and killed as they were walking to dinner. It’s been a long road back, physically and emotionally.

Even so, the 25-year-old Cantlay remains the talent he always was.

He is the only rookie — yes, this still counts as his rookie season — not to miss a cut this year. He was runner-up by a shot at Innisbrook, tied for third at Hilton Head and despite the limited schedule, goes into the BMW Championship next week with a strong chance to make the Tour Championship.

Cantlay cleared his first hurdle in his second tournament when he was runner-up at the Valspar Championship and earned more than enough to fulfill his major medical extension. Only he didn’t look at that as an achievement. He saw it as a loss. So the mention of East Lake as a goal was met with a blank stare.

“I’m just trying to win every tournament,” he said.

Cantlay might be higher in the ranking if not for an ankle injury that kept him out for two months this summer. He felt something wrong in his right foot while hitting balls and just didn’t want to risk another setback.

“I was playing a lot of golf that I hadn’t been before,” he said, referring to his two years away from golf. “The ankle, I was surprised about. Right now, I feel great and I’m really happy with my physical shape.”

As for his game? He has high standards, though he also is practical. He’s not going to win them all. He still hasn’t won the first one.

“I feel like I’m playing well and trending in the right direction,” he said. “Everything is on track to give myself a chance.”

ROOKIE RACE: PGA Tour rookie of the year is not an award that has much relevance, and sometimes the winner is simply the player who either wins a tournament or makes it to the Tour Championship. If that’s the case, there’s quite a race shaping up going into the BMW Championship next week.

Five of the rookies already have won this year — Cody Gribble, Mackenzie Hughes, Wesley Bryan, Xander Schauffele and Grayson Murray. Gribble and Murray might not get as much credit because their victories were opposite-field events.

Six of them are still alive in the FedEx Cup playoffs.

Hughes, the Canadian who won at Sea Island, closed with a 67 at the TPC Boston and moved up to No. 31 in the FedEx Cup. Right behind him is Schauffele, a steady leaderboard presence at the U.S. Open who won The Greenbrier Classic. Bryan, who won at Hilton Head, is at No. 37.

Patrick Cantlay also is intriguing because he has played so little this year while returning from a back injury. The former UCLA star is at No. 41.

Still in the mix are Ollie Schniederjans (No. 50) and Murray, who hurt his chances on Monday. Murray was in the third-to-last group for the final round and closed with a 77. He only moved up from No. 70 to No. 63.

Justin Thomas might want to enter this conversation at some point.

RAHM OUTLOOK: Jon Rahm will have seen a wide range of PGA Tour golf courses when he finishes the FedEx Cup, and just like most players, the 22-year-old from Spain has seen some holes that he doesn’t like.

But this is one time when the passionate Spaniard, who wastes little time getting upset with a bad shot, goes out of his way to stay positive.

“There’s always holes that catch your eye more than others,” Rahm said, already showing great diplomacy. “But if you start getting in the game of saying, ‘I don’t like this hole, this is bad,’ you’re never going to play that hole properly. You’re going to have a very bad attitude going there.”

“I always say, ‘I love this hole.’ I try to just do the complete opposite,” Rahm said.

He cited the 18th hole at Glen Oaks for The Northern Trust as an example. Rahm found that hitting driver usually left him a downhill lie to an elevated green.

“It definitely is not ... the greatest hole,” he said. “But it’s an example of one of those holes where I thought, ‘I love it, I love it. It’s a great hole.’ Thanks to that, I made birdie the last day.”

MICKELSON CHARITY: When the Phil and Amy Mickelson Foundation began in 2004, most of its emphasis was on groups benefiting the military and veterans, such as the Special Operations Warrior Foundation, Homes For Our Troops and Birdies for the Brave. It expanded to include educational initiatives. Never far away was support for communities in need.

That includes areas devastated by hurricanes.

The foundation last week donated $100,000 to Hurricane Harvey relief efforts in Houston, a city that takes on special meaning to the Mickelson family. Mickelson’s wife and mother are breast cancer survivors, both treated at the MD Anderson Cancer Center in Houston.

“We are very appreciative of the world-class medical facility that Houston has created over the years that we’ve gotten to not only utilize their facilities, but also get to know a lot of the people there,” he said. “It’s been heartbreaking to see them go through this. So we want to be a part of helping with the relief program, but also rebuilding because we know that’s going to be coming, too.”

A decade ago, Mickelson wrote a $250,000 check to foundations run by David Toms, Hal Sutton and Kelly Gibson to help with recovery efforts from Hurricane Katrina.

DIVOTS: The opening Sunday of NFL season will not feature any professional golf on TV. The PGA Tour Champions is in Japan and will be over by Sunday morning, while the European Tour ends by noon. The PGA Tour and Web.com Tour Finals are off this week, while the LPGA Tour is in Indianapolis for a 54-hole event that ends on Saturday so its players can get to France for the final major of the year. ... Lee Westwood makes his 500th start on the European Tour this week at the Omega European Masters.

STAT OF THE WEEK: Nine of the last 10 FedEx Cup playoff events were won by players from the top 10 in the world. The exception was Patrick Reed at No. 14.

FINAL WORD: “I can’t give you an answer on that. That’s only asking for trouble.” — Justin Thomas, when asked if he felt he was the best golfer in the world.