Ziemer's B.C. Golf Notes: Another Chapter In Sagebrush Saga; Monty On Form As He Prepares To Defend At Bear Mountain; Little, Turbide Advance To Match Play At U.S. Senior Amateur 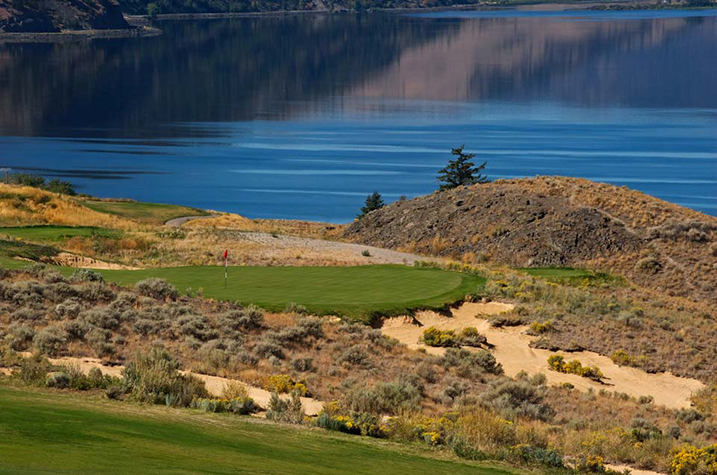 The Saga Of Sagebrush Golf Club Has Taken Another Turn As The Future Of The Property Outside Of Merritt, BC Remains Up In The Air - Image Courtesy Sagebrush Life

Two key executives of Sagebrush Golf Club have resigned and the course had some of its maintenance equipment and power carts repossessed earlier this summer.

Sagebrush, located about 15 minutes north of Merritt in Quilchena, has remained closed since Newmark Group, a Langley-based residential development company, bought the course from its original owners nearly two years ago.

The Vancouver Sun reported the FBI alleges in court documents that Chandler may have used investors’ funds to “support his lifestyle.” A Newmark Langley condo development is also embroiled in controversy and faces lawsuits involving tens of millions of dollars.

“Due to recent events and circumstances beyond our control, we have immediately ceased providing consulting and management services to Sagebrush and Newmark,” Cronk and Masse said in a joint statement.
Cronk and Masse are both experienced and well respected members of the B.C. golf community.

Cronk confirmed in a short interview that Sagebrush hads some of its equipment repossessed earlier this summer. “I have a great love for the Sagebrush property and I believe this is not the end of it,” Cronk said.

But it seems likely that if there is a future for Sagebrush, it will be under a new owner.

Montgomerie beat Billy Mayfair and McCarron by one shot to win his fifth PGA Champions title and his first since winning last September at Bear Mountain. The 54-hole Bear Mountain Championship begins Friday at the Bear Mountain Resort. Canadians in the field include Vancouver resident Stephen Ames, Ontario’s Rod Spittle and Victoria’s Jim Rutledge, who received a sponsor’s exemption.

Three other B.C. residents will be trying to earn a spot in the field in Tuesday’s qualifier. Murray Poje of Tsawwassen and Norm Jarvis of Surrey advanced from last week’s pre-qualifier at Kings Links, while Doug Morgan of Coquitlam earned a spot in the final qualifier by winning the PGA of BC Senior Championship.

ON TO MATCH PLAY: Jackie Little of Proctor and Sandra Turbide of Maple Ridge have both qualified for the Round of 64 match play at the U.S. Senior Women’s Amateur in Portland, Ore.
Little tied for 35th at 15-over par in the 36 holes of stroke play on the weekend, while Turbide was tied for 43th at 16-over. The Round of 64 will be played Monday, with the rounds of 32 and 16 contested on Tuesday. The championship match goes Thursday at Waverley Country Club.

ON TO ATLANTA: The PGA TOUR’s FedEx Cup playoffs resume this week at the BMW Championship near Chicago and it appears Abbotsford’s Adam Hadwin will advance to the season-ending Tour Championship in Atlanta no matter how he plays at the BMW.

He has lots to play for, however. If Hadwin could move inside the top five with a big week in Chicago, he would be in position to win the FedEx Cup by winning the Tour Championship. Mackenzie Hughes of Dundas, Ont, (No. 31) is the other Canadian in the BMW field.

Hadwin spent much of last week in the Metro Vancouver area. He held his annual charity tournament at Morgan Creek in Surrey on Friday and it raised more than $184,000.

SEASON FINALE: Eight Canadians, including three British Columbians, have qualified to play in this week’s season-ending Freedom 55 Financial Championship on the Mackenzie Tour-PGA Tour Canada circuit. The top 60 players on the money list after the completion of the Ontario Championship on Sunday qualified for the season-finale at Highland Country Club in London, Ont., and also remain exempt for the 2018 Mackenzie Tour season.

The top three Canadians on the money list after the Ontario Championship are British Columbians. Kimberley’s Jared Du Toit leads the way at No. 22, while Seann Harlingten of West Vancouver is 30th and Ryan Williams of Vancouver is 34th. The Ontario Championship was won by Kramer Hickok of Dallas, Tex., who now has a comfortable lead atop the Mackenzie Tour money list.

Burnaby’s John Gallacher will be defending his Super-Senior Championship won last year. The field of 156 players will be cut to the low 70 and ties after Tuesday’s second round. The winner will receive an exemption into the 2018 U.S. Senior Men’s Championship in Eugene, Ore.