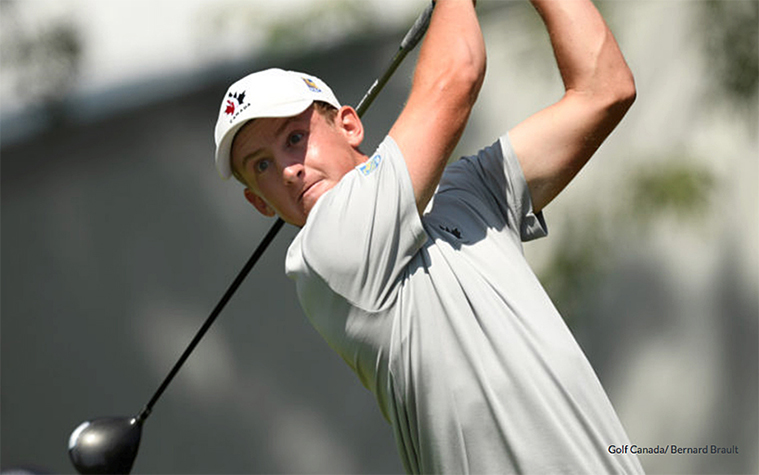 He wasn’t happy with the way he finished his round, but Kimberley’s Jared du Toit hung on to win Canadian Player of the Year honours on the PGA Tour Canada-Mackenzie Tour circuit.

That award, sponsored by Freedom 55 Financial, carries a hefty $25,000 bonus and du Toit said it helped soothe the frustration he was feeling about ending his round Sunday with three straight bogeys.

Du Toit closed with an even-par 70 to finish the season-ending Freedom 55 Financial Championship in London, Ont., at 10-under par and tied for 17th place. He finished the season 23rd on the money list with $26,233, although he made more than that in unofficial money on Sunday.

He also picked up Canadian player of the week honours Sunday which was worth another $2,500. “That (player of the year) bonus made a pretty bitter finish feel pretty good,” du Toit said after the round.

Du Toit was especially disappointed with his finish because he had an opportunity to crack the top 20 on the money list, which would have given him a pass through to the second stage of the Web.com Tour qualifying school. Instead, he now must head to the first stage later this month in Phoenix. “It is kind of unfortunate the way it ended, but winning Canadian Player of the Year makes it sting a little bit less, I guess,” he said.

Du Toit turned pro earlier this summer after graduating from Arizona State University. The 22-year-old did not miss a cut in 11 starts on the Mackenzie Tour this season and had three top 10s. He felt he should have had at least twice that many top 10s but didn’t finish tournaments as well as he would have liked.

“I think there are a lot of positives to take away from the year,” du Toit said. “I was pretty solid all year, but I wasn’t able to get it done in crunch time when it came to getting a win or just a higher finish. But almost every week I was in position and I made every cut. I know my game is there, I just have to square away the other stuff.” 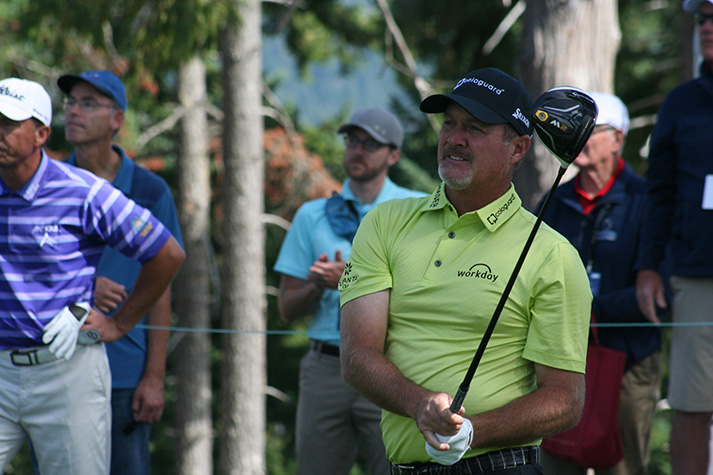 Jerry Kelly Tees Off En Route To His Second Win On The PGA Tour Champions Circuit, Both Of Them In Canada

Kelly, a rookie on the 50-and-over tour, won his first event at last month’s Boeing Classic in Seattle. Kelly’s 54-hole total of 14-under par at Bear Mountain’s Mountain course was one shot better than two-time U.S. Open champion Lee Janzen. Kelly, who shot a four-under 68 on Sunday, earned $270,000 for the win.

Unfortunately, not many people saw it. The Pacific Links tourney was the only event on the PGA Champions schedule without any TV coverage.

ON TO ATLANTA: Abbotsford’s Adam Hadwin closed with a six-under 65 to finish tied for 40th place at the BMW Championship near Chicago. Hadwin will head to this week’s Tour Championship in Atlanta at No. 21 on the FedEx Cup points list.

Hadwin was paired Sunday with Dustin Johnson, which prompted the PGA TOUR to suggest on its Twitter account that it was a preview of a possible Presidents Cup match.
Hadwin had some fun with it. Johnson shot a 64 Sunday and Hadwin tweeted after his round: “I lost two down. . .”

She lost her quarter-final match 2&1 to Patricia Schremmer of Honolulu. But fellow Canadians Judith Kyrinis and Terrill Samuel advanced to the final, where Kyrinis prevailed 4&3.

LOW CANADIAN: Vancouver’s Doug Roxburgh was the low Canadian, finishing tied for sixth place at the Canadian Senior Men’s Championship at Kanawaki Golf Club in Quebec. Roxburgh’s 72-hole total of eight-over 288 was five shots behind winner Gene Elliott of Des Moines, Iowa. It was also just one shot more than the 287 total Roxburgh recorded when he won the Canadian Amateur title at Kanawaki back in 1982.

The 65-year-old Roxburgh, a 13-time winner of the B.C. Amateur Championship, said he was hoping to match that total. “I wanted to birdie 18 to tie, but missed my 35-footer for birdie,” Roxburgh said. Pemberton’s Lance Lundy finished second in the 36-hole Super Senior competition. His score of three-over par was just one shot behind winner Paul Simson of Raleigh, N.C.

COMEBACK WIN: Former B.C. junior standout Richard T. Lee earned his second career win on the Asian Tour on Sunday. The former Marine Drive junior fired a final round of five-under 66 to win the Shinhan Open in Incheon, South Korea by one shot over Gavin Green of Malaysia. Lee finished with a winning score of 11-under par and earned $190,000 US.

Lee’s last win on the Asian Tour came back in 2014. He has recently battled through injuries, including a dislocated shoulder. “I am going to remember this win for a long time, especially after coming off the injuries and working on my game from scratch again,” Lee said.

NEW GM: Joel Trainor has been appointed as the new general of Sagebrush, the highly acclaimed course near Merritt that has been closed for two years. Trainor has been working as tournament director at Meadow Gardens Golf Course in Pitt Meadows and has also been involved in the craft beer industry.

The Vancouver Sun reported the FBI alleges in court documents that Chandler may have used investors’ funds to “support his lifestyle.” A Newmark Langley condo development is also embroiled in controversy and faces lawsuits involving tens of millions of dollars.

TEAM BC: Richmond Country Club plays host to this week’s PGA of Canada’s Assistants Championship. Kevin Stinson of Mission, Bryn Parry of North Vancouver, Oliver Tubb of Vancouver and Cody Bell of Kelowna will comprise the PGA of BC’s inter-zone team at the 54-hole competition that begins Monday.