PONTE VEDRA BEACH, Florida — The PGA TOUR today released the full 2017-18 Season schedule of 49 FedExCup tournaments, representing an increase of two events with the previously announced additions of THE CJ CUP @ NINE BRIDGES at Jeju Island, Korea, and the elevation of the Web.com Tour’s Corales Puntacana Resort & Club Championship in the Dominican Republic. Total prize money for the season will be a record of more than $363 million.

THE CJ CUP @ NINE BRIDGES, Korea’s first official PGA TOUR event, debuts October 16-22 at The Club at Nine Bridges as one of eight tournaments in the 2017 portion of the schedule, which was released in August.

The Corales Puntacana Resort & Club Championship, which was held for two years on the Web.com Tour, will debut on the PGA TOUR March 19-25, 2018, the same week as the World Golf Championship-Dell Technologies Match Play. The Tom Fazio-designed Corales course will continue to serve as the tournament course.

The Puerto Rico Open, in turn, moves from Match Play week to February 26-March 4, coinciding with the World Golf Championships-Mexico Championship. With the addition of the two new international tournaments, the schedule includes nine tournaments in eight countries outside the United States.

Other significant changes relate to venues. The AT&T Byron Nelson (May 14-20) moves to the new Trinity Forest Golf Club in Irving, Texas, while two FedExCup Playoffs events change courses: THE NORTHERN TRUST (August 20-26) returns to The Ridgewood Country Club in New Jersey and the BMW Championship (September 3-9) visits historic Aronimink Golf Club near Philadelphia for the first time, marking only the second time in the tournament’s 115 years of play that it will be held in Pennsylvania (1959 being the other).

Additionally, the U.S. Open (June 11-17) returns to Shinnecock Hills Golf Club in Southampton, New York, for the first time since 2004; The Open Championship (July 16-22) rotates to Carnoustie Golf Links in Scotland and the PGA Championship (August 6-12) will be held at Bellerive Country Club in St. Louis for only the second time (first being in 1992).

One final change sees the open week during the 2018 FedExCup Playoffs shifting by one week. The first three events will be held consecutively – THE NORTHERN TRUST, the Dell Technologies Championship at TPC Boston (August 27-September 3) and BMW Championship. Then comes the open week, followed by the season-ending TOUR Championship at East Lake Golf Club in Atlanta (September 17-23). 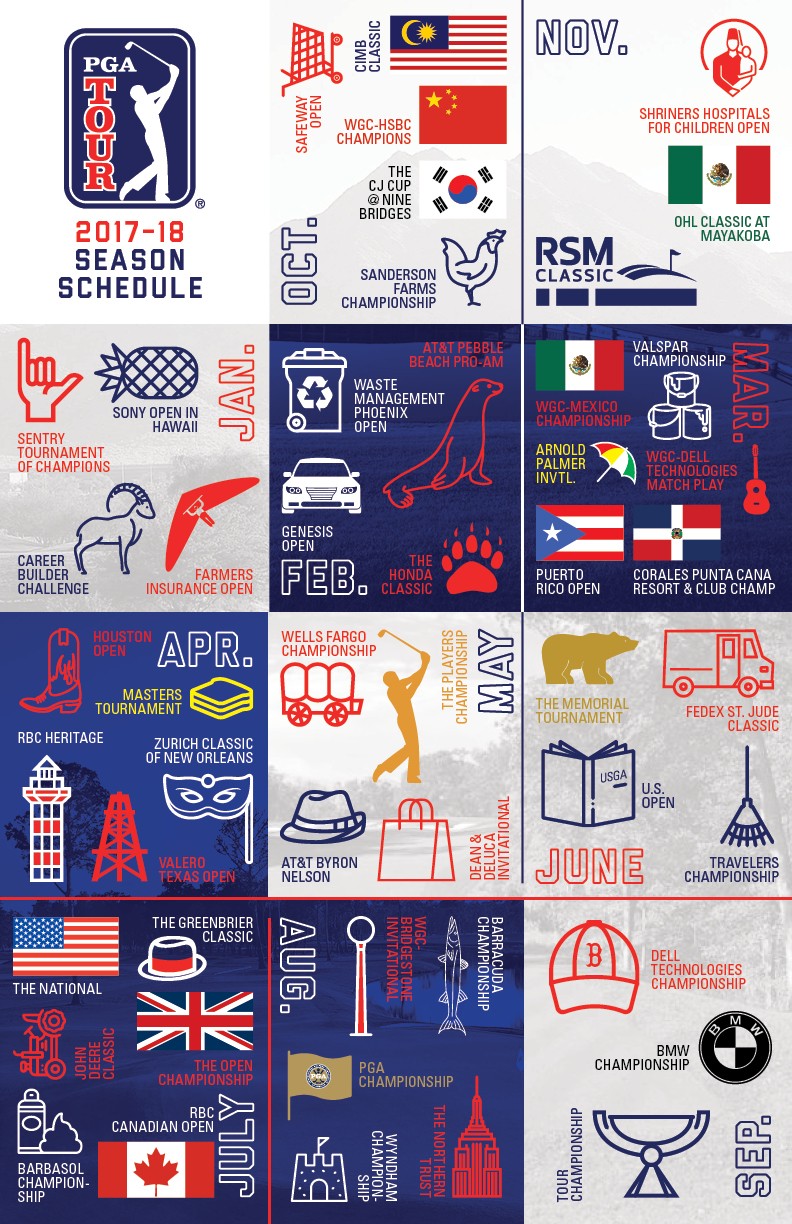