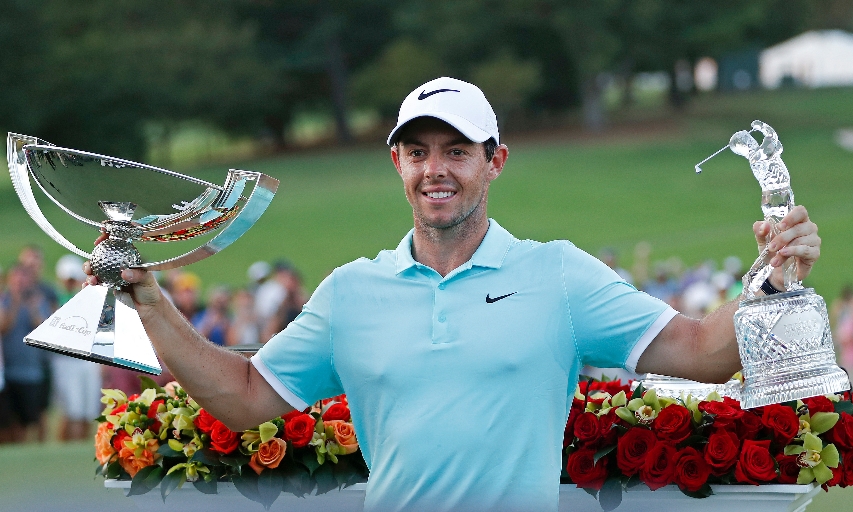 Along With Revamping The PGA Tour Schedule In Two Years, This Would Be A Great Time To Change The Format For The FedEx Cup. One Plan Under Discussion With The Players Is To Separate The Tour Championship From One Final Day Worth US$10 million To The Winner. Here, Rory McIlroy Poses With The Trophies After Winning The 2016 Tour Championship And The FedEx Cup. (AP Photo/John Bazemore, File)

ATLANTA, Georgia (Doug Ferguson/AP) — Dustin Johnson had a chance to win $10 million while sitting in front of a television.

For all the drama the final day of the FedEx Cup can provide, it must have been just as entertaining inside the clubhouse at East Lake last year. Johnson was the No. 1 seed and had squandered his chances to win the Tour Championship with a 73 in the final round.

He still could capture the FedEx Cup provided Rory McIlroy didn’t win. Just his luck, McIlroy holed a shot from the 16th fairway for eagle and got into a playoff when Kevin Chappell and Ryan Moore both missed birdie putts on the last hole.

And all Johnson could do was watch.

“No offense to Rory, but I was rooting for Chappy very hard,” Johnson said. “If he would have won, I would have won the FedEx Cup.”

Chappell was eliminated on the first extra hole, and McIlroy wound up beating Moore on the third playoff hole.

Imagine being in the clubhouse with Johnson.

“Extremely uncomfortable,” said Justin Thomas, who happened to be sitting there with Johnson and his family, including 18-month-old son Tatum. “I’m in there with some tour guys and we’re dead quiet. We can’t really react or do anything. We can’t say normal stuff we would say. We needed to be pro-Ryan Moore. And Tatum was on the ground playing on an iPad while this playoff was going on. It was great.”

It could happen again this year.

Jordan Spieth, the No. 1 seed this year, wouldn’t be surprised if it did, and he wouldn’t want to be in Johnson’s place. The winner gets a $10 million bonus. The guy who finishes second in the FedEx Cup gets $3 million. This is one definition of a first-world problem.

“He’s sitting there not able to control a $7 million difference. That doesn’t happen anywhere else,” Spieth said. “It’s like having a $7 million bet on a fight that you’re not even taking part in.”

Such a scenario might not be a possibility much longer.

Along with revamping the schedule to end the FedEx Cup around Labor Day, the tour is contemplating an overhaul to the FedEx Cup finale. One idea floating around is for the Tour Championship and the final day of the FedEx Cup to be separated.

The Tour Championship, the last of the playoff events, could end on a Saturday. That would leave Sunday for the top players to compete over 18 holes — or perhaps even 36 holes for a truer test — to determine who gets the $10 million as FedEx Cup champion.

“We’ve considered virtually every single circumstance that’s available to us, and that is one possibility,” Commissioner Jay Monahan said.

One question is how many players qualify for the final day. A popular number making the rounds is six players. They would compete in groups of three on Sunday, and the low score wins. It’s that simple.

Spieth is aware of the conversation between the PGA Tour and its players, and he buys into the idea that it would only add to the interest and to the TV ratings. His only concern is having two big prizes — the Tour Championship and the FedEx Cup — stacked on top of each other.

“A guy who just won the Tour Championship — let’s say he was fifth (seed) — has been on this grind, and now you’re telling him to play 18 or 36 holes for the much bigger prize,” Spieth said. “Anyone who’s not a player doesn’t have the bearings to recognize how much it takes out of you. That’s why I think you could have an unfair champion.”

He caught himself, because an argument can be made that the FedEx Cup is rarely fair.

Johnson was the best player in golf last year and didn’t win the FedEx Cup, just like McIlroy was the best in 2014 when he was second to suddenly-hot Billy Horschel.

Change seems inevitable. It’s now a matter of the model.