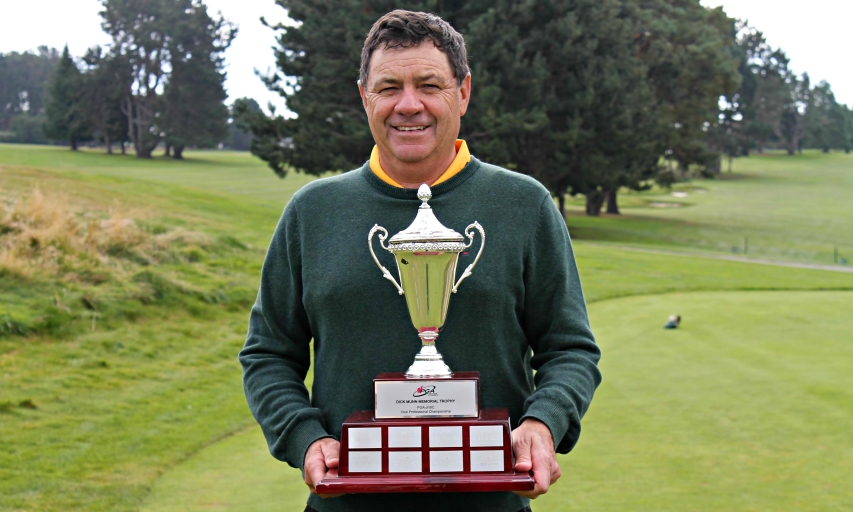 Jonas (Philip Jonas Golf Academy) fired a tournament-low, 4-under-par round of 66 on the esteemed Oak Bay course to finish with a 36-hole total of 3-under-par 137, beating out Matthew Palsenbarg (Northview Golf Academy) by two strokes to claim the Dick Munn Memorial Trophy. The 55-year-old was making his first appearance in the annual event, which is open to all Head, Executive and Head Teaching Professionals of the PGA of BC.

“I really wanted to win this tournament, given it being my first attempt. And as I’m getting older, I have to win whenever I can,” Jonas said with a laugh. “It’s very satisfying.”

Playing in the final group and starting the day one stroke off the first-round pace set by Jesse Crowe (Salmon Arm Golf Club), Jonas got off to a quick start by making a chip-in eagle on the par-5 first hole. That gave him an early lead that he would never relinquish.

Needing a two-putt par 18th hole to secure the victory, Jonas rolled in a 20-footer for one of his four birdies on the day. He collected the winner’s share of $2,700 from a prize purse totalling more than $15,000.

Palsenbarg finished as the runner-up for the second consecutive year, closing with a bogey-free 68. Playing in the group ahead of Jonas, Palsenbarg briefly held a share of the lead while playing Victoria Golf Club’s iconic oceanside par 3s that close out the front nine, but the tie was broken for good when Jonas made birdie at No. 8.

“I hit 15 greens and hit the ball really well. You can’t fault the putter when you’re burning edges and the greens are hard to read,” said Palsenbarg, who birdied the 1st and 17th holes while parring the rest. “I made an eight-footer on No. 1, then just lots of two-putts.”

The Club Professional Championship has been contested annually since 2006, and has traditionally been held at one of the province’s premier courses near the end of each season. Competitors raved about this year’s venue, with Jonas calling Victoria Golf Club his favourite course in British Columbia.

“It’s 6,000 yards of pure joy,” he said. “This course never feels short, it has so many great holes … it’s in magnificent condition.”

“Every time I play here it’s such a treat. There’s nothing better.”

About PGA of British Columbia
The Professional Golfers' Association of British Columbia is an association comprised of nearly 700 golf professionals who work at and operate golf courses, driving ranges and other facilities across the province. Its mandate is to promote and advance the game of golf, serving the needs of both its membership and the golf public through professional and junior golf development programs and high-calibre competitive events. The Zone Office is located in Richmond, BC.

About Cleveland Golf/Srixon Canada
Cleveland Golf, founded in 1979, is a leading equipment manufacturer specializing in short-game technologies and solutions that benefit all golfers. Srixon, with more than 80 years of golf ball manufacturing experience, is committed to producing the highest quality, technically innovative golf balls which offer maximum performance to golfers of all levels of ability, while also offering a full range of clubs, balls and accessories. For more information, visit www.clevelandgolf.com and www.srixon.com.