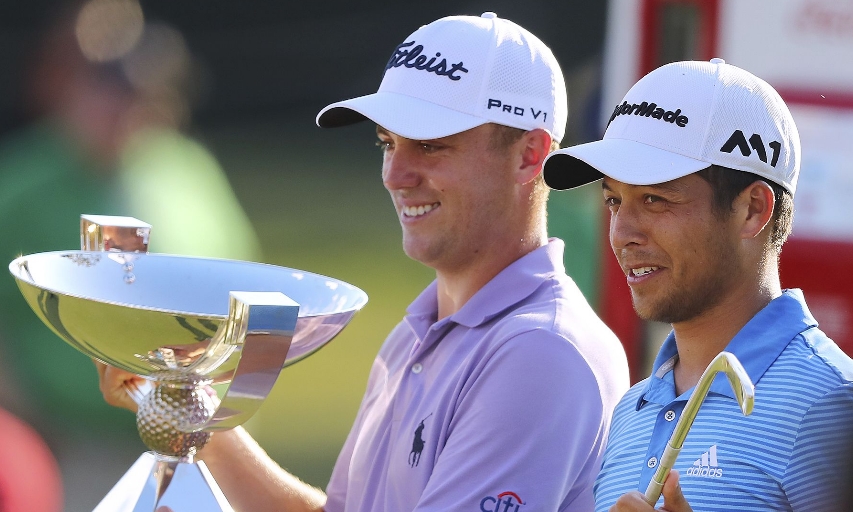 There was plenty of drama but no satisfaction.

The PGA Tour must figure out a better way to end its season.

This was roughly akin to the New York Giants winning the Super Bowl in 2008, only to get to the locker room and watch the New England Patriots receive the Lombardi Trophy because they had the better season.

Schauffele played the role of the Giants on Sunday, rolling in a 3-footer for birdie at the final hole — the ball whirling all the way around the lip before dropping in — to complete his sudden, stunning rise with an improbable victory in the Tour Championship.

But the biggest prize at East Lake, the FedEx Cup and its hefty payout, went to the guy who finished second.

That’s not to say Thomas wasn’t a worthy recipient. The 24-year-old had a breakout season, winning five times including his first major title at the PGA Championship. He’s the future of golf along with Jordan Spieth, Rory McIlroy, Jon Rahm and a handful of other 20-somethings.

But it felt downright anticlimactic to have two guys standing alongside the 18th green, divvying up the accolades and the prizes.

Thomas was actually a big miffed about how it all went down.

He wanted to win the tournament more than anything.

He finished one shot behind Schauffele.

“It feels very weird,” Thomas conceded. “I’m sure people were kind of shocked at my reactions or my tone because I was — I mean, I wasn’t mad — but my competitive nature, I mean, I was upset. I felt like I had a great chance to win this tournament, and I didn’t.”

To be fair, the Tour has always been faced with a staggering challenge when it comes to drawing more eyeballs to its season finale, to transform this tournament into one that even casual golf fans will be talking about for years to come.

The four major championships are bigger, and always will be.

So is the every-other-year Ryder Cup.

Ditto for The Players Championship and perhaps the Memorial.

Moving the PGA Championship from August to May beginning in 2019 is a huge step in the right direction, as is reducing the FedEx Cup playoff from four events to three, all of which will allow the golf season to officially end on Labor Day weekend — right as the football season is kicking off.

There’s been talk of ending the Tour Championship on Saturday, leaving the final day for the top players to compete over 18 holes, maybe even 36, to determine who gets the $10 million prize. While that might be an improvement, it still seems more of a gimmick than a real solution.

Why not go all in?

The top 125 players from the regular season make the playoffs. Two playoff events reduce the field to 30 players for the Tour Championship, basically the same way it’s done now. The finale is a winner-take-all for the FedEx Cup and the $10 million (or an even bigger prize, if you combine the money that is now divided between the tournament and the playoff).

It wouldn’t necessarily be the fairest format, but most playoffs aren’t fair.

But everyone still talks about that Super Bowl they lost after a perfect regular season.

Schauffele would’ve gone down as one of the most unlikely champions in FedEx Cup history, a 23-year-old rookie who was simply worried about keeping his tour card before an amazing summer stamped him as another rising star. When that final tap did nearly a full revolution around the cup, it should’ve truly been a putt to remember.

Or maybe, with so much on the line, Schauffele wouldn’t have been in that position in the first place. He wasn’t really focused on winning the FedEx Cup, entering the Tour Championship with only a slight chance of capturing both titles since he was so low in the points.

“There’s so much hype about this trophy right here,” Schauffele said, motioning toward the silver bowl that went to Thomas, “maybe that’s what made me feel a little more at ease today.”

Again, in fairness to the Tour, this was the first time since 2009 that the finale produced two different winners.

The system that began a decade ago has already received some much-needed tweaking, and more is surely on the way.

“I don’t know if changes will be made or how soon or whatever it may be, but I know they’re going to be for the better and we’re all going to be on board,” Thomas said.

After making the rounds to various sponsors and media outlets, he was feeling a whole lot better about how the day turned out.

He had $10 million and a shiny new trophy.

“It’s odd getting something so tremendous, one of my best achievements in my career, without winning a golf tournament,” Thomas said, breaking into a smile. “It feels different, but it’s still great.”

It could be even better.