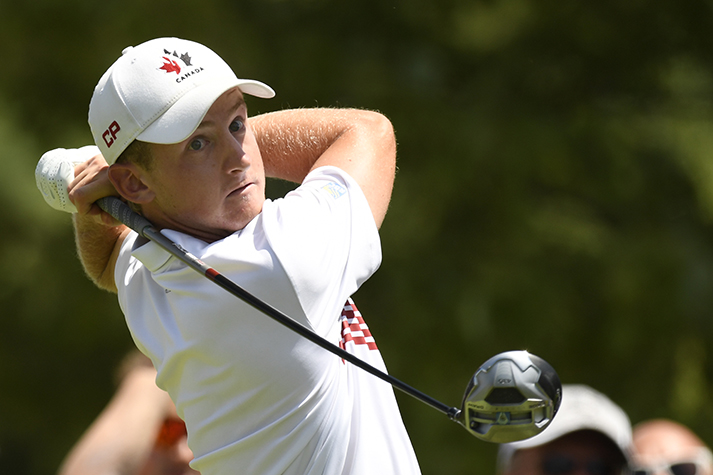 Kimberley, BC's Jared du Toit Took Medallist Honours As He And Three Other BCer's Earned Their Way Into Round 2 Of Web.com Q-School - Image Courtesy Golf Canada

Abbotsford’s Adam Hadwin officially ended the Presidents Cup on Sunday afternoon when he conceded a three-foot putt for par to Phil Mickelson on the 17th green at Liberty National Golf Club.

Hadwin and Mickelson were the last two players on the course in Sunday’s singles finale. Of course, the Presidents Cup had been clinched by the Americans much earlier.

Hadwin lost his match 2&1 to Mickelson, who was playing in his 100th match in Ryder Cup and Presidents Cup competition. Hadwin has now played three and hopes more are to come.

He earned a half point in his debut on Friday, when he teamed with Japan’s Hideki Matsuyama to halve their match with Patrick Reed and Jordan Spieth. Hadwin and Australian Adam Scott fell 4&3 in Saturday morning’s foursomes play to Matt Kuchar and Dustin Johnson.

Hadwin won the opening hole against Mickelson on Sunday with a bogey. But Mickelson won the next four holes and Hadwin was playing catch-up the rest of the way. Hadwin wasn't expecting to take any time off to reflect on a highly successful year and his Presidents Cup debut as he had originally planned to be back at work later this week when the new 2017-18 PGA Tour season tees off at the Safeway Open in Napa, Calif. but was a late withdrawl.

West Vancouver's Seann Harlingten finished tied for second at 20-under par. Stuart Macdonald of Vancouver tied for 11th at 13-under and Riley Wheeldon of Comox finished 15th at 12-under. The top 23 and ties advanced to the second stage, which will be played at five different sites in early November. The Q-school finals go Dec. 7-10 at Whirlwind Golf Club in Chandler, Ariz.

MAMMA MIA: Langley’s James Allenby is heading to the European Tour qualifying school with lots of confidence and some cash in his wallet. Allenby completed a stellar season on the Vancouver Golf Tour by winning its marquee event, the Vancouver Open at Northview Golf Club in Surrey.

Allenby closed the 54-hole event with a six-under 66 to finish at 11-under par. That was one shot better than runners-up Steven Lecuyer of Victoria and Oregon’s Nick Sherwood. The win, Allenby’s sixth of the year on the VGT, was worth $10,000. That will come in handy as he competes this week in the first stage of the European Tour Q school in Bogogno, Italy.

TAYLOR GIVES BACK: Taylor, meanwhile, won his own charity event at Ledgeview Golf Club in Abbotsford last week. The event raised money for the University of the Fraser Valley Cascades golf team and two charities selected by Taylor and his wife Andie: the Starfish pack food program and the Holmberg House adult hospice facility.

Taylor and Cascades golfer Daniel Campbell finished the tournament tied at three-under par. Taylor won it with a birdie on the first playoff hole. “This is a tournament that has been going on for eight or nine years,” Taylor said.

“Chris (Cascades coach Chris Bertram) approached me last fall after I’d played (in the Cascades annual fundraising tourney) and had an idea and we kind of ran with it. It’s turned out amazing.”
Taylor is also in the field this week at the Safeway Open in Napa.

KIM-DANDY: Surrey’s Michelle Kim registered her second straight top-10 finish of the season at the Coeur d’Alene Resort Collegiate Invitational. Kim, a former B.C. Women’s Amateur champion now in her junior year the University of Idaho, tied for sixth place at two-under par. It was Kim’s best score to par in her collegiate career and the 10th top-10 finish of her collegiate career.

Richmond’s Alisha Lau helped the University of Colorado win the event with a school record score of 18-under par. Lau, the reigning B.C. Junior Girls champion who is just beginning her collegiate career, fired rounds of 77, 68 and 72 to finish tied for 26th place. Delta’s Mary Parsons, a freshman at Indiana University, led her team with a tie for 20th place.

SFU finished with a 54-hole team score of eight-under 856. That was 11 shots better than runners-up University of B.C. and Oklahoma Christian University. Kerr closed with a six-under 66 to finish at 10-under and collect his first collegiate win. Crisologo closed with a 70 to finish two shots back at eight-under par.