Kizzire Outlasts Fowler In 36-Hole Final To Win In Mexico 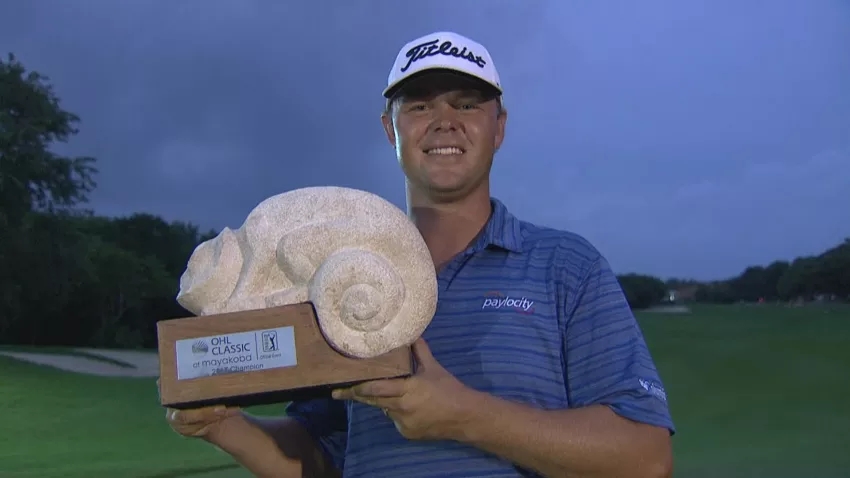 PLAYA DEL CARMEN, Mexico (AP) — Patton Kizzire had a four-shot lead with seven holes remaining, right about the time nerves can surface for a player trying to win his first PGA Tour title.

Kizzire made it look like a walk on the beach.

Never flinching during a 36-hole Sunday with Rickie Fowler, Kizzire saved par with big putts on three holes on the back nine, closed with rounds of 66-67, didn’t make a bogey over the final 21 holes and won the rain-plagued OHL Classic at Mayakoba to earn his first trip to the Masters.

Fowler fell too far behind and began his rally too late. Two straight birdies brought him to within one shot going to the 18th at El Camaleon Golf Club, only for Fowler to hit a short iron some 35 feet left of the flag and leave his birdie attempt short.

“I was glad to get it done,” Kizzire said. “Rickie made me work hard.”

Kizzire began his marathon day by making a 12-foot bogey putt on the first hole of the third round. He began the final round by making a 10-foot par save.

“We could go on and on,” he said. “I had a lot of critical saves or birdie putts. That’s what you need to win golf tournaments.”

He now speaks from experience. The 31-year-old Kizzire, who took a long road to the PGA Tour after leaving Auburn, won in his 62nd career start as he begins his third full season in the big leagues.

He finished at 19-under 265 and the perks were just starting to sink in. Kizzire earns a two-year exemption through the 2019-20 season. He starts next year on Maui for the Sentry Tournament of Championship at Kapalua. He’ll be at the Masters in April and the PGA Championship in August.

“I’ve been thinking about this moment for a long time,” he said. “I’m really excited, and it brings a big smile to my face to think about all those things.”

Fowler made him work until the very end.

Kizzire’s tee shot on the 18th hole came so close to a bunker that he had to stand close to the ball to avoid creating an awkward stance with his feet in the stand, and he hit 8-iron to about 25 feet. After Fowler left his birdie attempt well short, Kizzire rapped his putt within a few inches and tapped in for the winning par.

“We gave it a run, kept Patton honest, but he earned it out there today,” Fowler said.

Si Woo Kim tried to get into the mix until a double bogey in the middle of his back nine. He still closed with a 65 to finish third, his best finish since he won The Players Championship in May. Charles Howell III (66) and Martin Piller (65) finished five shots behind. John Oda of UNLV, playing his first PGA Tour event as a pro, closed with a 70 to finish eighth. That gets him into the RSM Classic next week at Sea Island.

Patrick Rodgers began Sunday in a three-way tie for the lead with Kizzire and Fowler, but he started and ended the third round Sunday morning with a double bogey for a 72 that took him out of contention, and he shot 70 in the afternoon to finish nine shots behind.

Kizzire won the tournament with key putts on the back nine, but the tournament turned in his favor at the end of the third round. Fowler had a one-shot lead when he made bogey on the 17th hole and Kizzire made birdie. That two-shot swing gave Kizzire a one-shot lead, and he quickly expanded it in the fourth round.

Kizzire saved par with a 10-foot putt on No. 1 as Fowler made bogey, and then Kizzire birdied the second hole and is lead was already at three shots.

Fowler never got any closer until the final few holes, and by then it was too late.

Fowler, the only player in the top 10 in the world who played anywhere in the world this week, was playing for the first time since the Presidents Cup five weeks ago. With his runner-up finish — the 12th time in his PGA Tour career he has finished second — Fowler goes to No. 7 in the world ahead of Rory McIlroy.

Corey Conners of Listowel, Ont., was the lone Canadian to make the weekend – the Team Canada Young Pro Squad member finished at 2 over par.