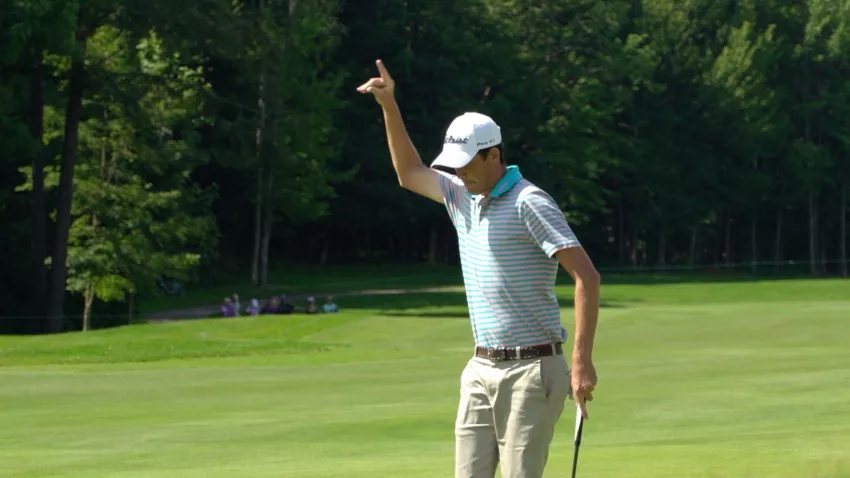 “On behalf of the PGA TOUR, I would like to congratulate Chesson Hadley for a tremendous season on the Web.com Tour, and for earning this award through a vote of his peers,” said Monahan. “By winning the Regular Season and Finals money lists, he put forth one of the best seasons in Tour history, and set the foundation for a great start to his 2017-18 campaign.”

Hadley competed on the Web.com Tour in 2013, winning the Rex Hospital Open and Web.com Tour Championship to earn his PGA TOUR card for the 2013-14 season. Once on TOUR, the former Georgia Tech golfer broke through with a win at the 2014 Puerto Rico Open, which delivered Rookie of the Year honors later that same year.

After losing his exempt status following the 2015-16 PGA TOUR season, Hadley returned to the Web.com Tour in 2017, where he notched five top-25 finishes in his first 12 starts – including a playoff loss at the Rex Hospital Open – before winning the LECOM Health Challenge in July.

The victory, which secured his return to the PGA TOUR, gave way to a strong second half of the season for the 30-year-old, including a solo-third finish at the Price Cutter Charity Championship presented by Dr Pepper and his second win of the year at the Albertsons Boise Open presented by Kraft Nabisco – one of three top-10s compiled during the Web.com Tour Finals.

“This is a special way to cap off a great season and I’m especially grateful to my fellow players for their vote. The Web.com Tour, and everyone who works alongside it, does a phenomenal job of supporting and developing players,” said Hadley. “I’m honored to accept this award and hope to carry the momentum forward this coming season on the PGA TOUR.”

By virtue of winning both money titles, Hadley was the only player to earn full exempt status on the PGA TOUR for the 2017-18 season, which includes a spot in THE PLAYERS Championship.

“Chesson returned to the Web.com Tour in 2017, and by working hard, being disciplined, and relying on those around him, he honed his game, confidence and competitiveness. Today, he is back on the PGA TOUR, with three top-5 finishes under his belt,” said David L. Brown, Web.com’s Chairman, CEO and President. “His inspirational journey underscores the real reason why the Web.com Tour exists – to help golfers reach their potential. On behalf of Web.com’s 3,800 employees who help businesses reach their potential, congratulations to Chesson and his entire team for this well-deserved honor.”

“Chesson Hadley put forth one of the best seasons in Web.com Tour history,” said Glod. “Equally as important, Chesson was a fantastic representation of the Web.com Tour membership outside the ropes through his interaction with fans, sponsors, tournaments and volunteers.  We are proud to name him as the 2017 Web.com Tour Player of the Year.”

Hadley was honoured at a reception at the Sea Island (Ga.) Resort, host of this week’s The RSM Classic, which gets underway tomorrow.