Kuchar Takes His Kids On The Road For Quite An Education 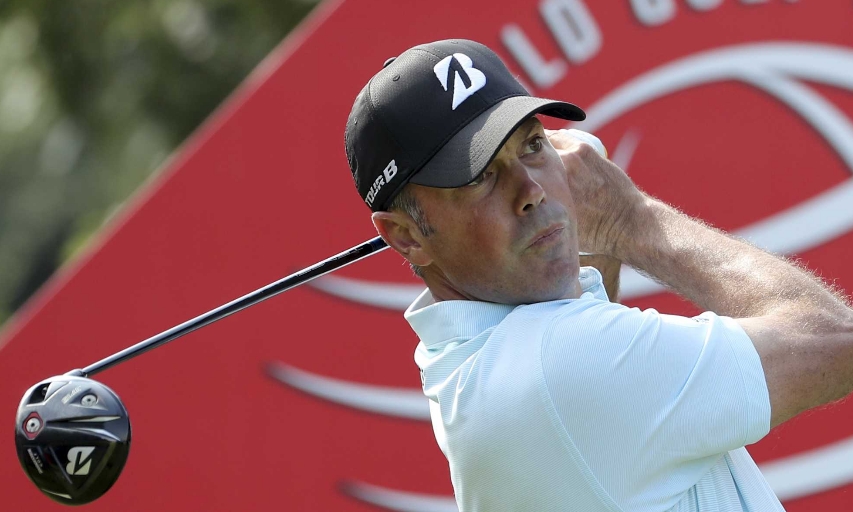 The Last Time Matt Kuchar Played, 10-Year-Old Cameron And 8-Year-Old Carson Tagged Along On The First Part Of The Trip To Japan, And Spent A Week Riding Bullet Trains, Going To A Sumo Wrestling Match, And Touring A Ninja Training Studio. (AP Photo/Ng Han Guan, File)

NAPLES, Florida (Doug Ferguson/AP) — Matt Kuchar has what amounts to a home game this week in the RSM Classic at Sea Island, which must be awfully boring for his two sons.

The last time Kuchar played, 10-year-old Cameron and 8-year-old Carson tagged along on the first part of the trip to Japan and spent a week riding bullet trains, going to a sumo wrestling match and touring a ninja training studio.

Those trips are more the norm than the exception.

Kuchar and his wife, Sybi, decided to home-school their two sons, and they have a teacher who goes with them when their travels take them to Hawaii or Japan and loads of places in between.

“It’s such an education traveling,” Kuchar said. “Somebody once told me, ‘Don’t let school interfere with a child’s education.’ And I certainly agree with it, especially at their age. Now the kids get the best of it. We travel. We have a teacher travel with us so they do proper academic studies. They’re doing their work on the road and then going out and seeing things.”

And it doesn’t have to be all that exotic. Kuchar recalls the time he went to Turkey in 2012 for an exhibition. Cameron was turning 5 that week and he wasn’t sure what he could do for a 5-year-old’s birthday in Turkey.

“Everyone got into bath robes in our room and we turned it into a Turkish bath party,” Kuchar said. “The thing he remembers the most is we had two security guards assigned to us. They were big guys. He thought that was cool to have two security guards.”

Kuchar traveled to Japan the first year he won on the PGA Tour. He has played in China and Japan, Turkey and Hong Kong, Australia and Fiji, Germany and France. He says he got the travel bug from his mother.

“If there was a chance to go somewhere, she wanted to take advantage,” Kuchar said. “I always had that side of me to get in as much as I can. If you get a chance to experience something different, let’s go.”

UPHILL BATTLE: So Yeon Ryu is facing tough odds of winning the $1 million Race to the CME Globe bonus, even though she is among the top five seeds who only has to win the CME Group Championship.

Ryu has been coping with an injured right shoulder since the last week of October in Malaysia, and it has limited her practice. She said it was at about 80 percent when she practiced Monday, and that made her excited.

“But when I tried to practice this morning, I couldn’t really hit the ball, so I only played four holes and just putted,” she said. “To be honest, my No. 1 goal is just my shoulder being 100 percent and then play tournament.”

Ryu said the injury to the muscle is from overuse, and not related to any ligaments. She rested all of last week and limited herself to hitting no more than 50 balls in practice.

“My expectation with my long game is not really high right now,” she said. “But the good news is this is my last tournament of the year, so I can have plenty of rest.”

PGA IN PHILLY: The PGA Championship is returning to Aronimink in 2027 for the first time since Gary Player won his first Wanamaker Trophy in 1962.

The club outside Philadelphia also will host the KPMG Women’s PGA Championship in 2020. That makes Aronimink becomes the first course to stage each of the PGA of America’s three rotating majors — the PGA Championship, Senior PGA and Women’s PGA.

Aronimink last hosted top players in 2010 and 2011 at the AT&T National hosted by Tiger Woods, when the course filled in for Congressional as it was preparing to host the 2011 U.S. Open. Justin Rose won at Aronimink in 2010, while Nick Watney won in 2011.

FATHER-SON: Jack Nicklaus has won the PNC Father-Son Challenge with his son. Now he’s going to try it with his grandson.

The 20-team field anchored by major champions includes Nicklaus playing with Gary “G.T.” Nicklaus Jr., whose father won the tournament with Nicklaus in 1999. The only other father-grandson teams over the years were Arnold Palmer with Sam Saunders and Will Wears.

Nicklaus described G.T. as a “big kid and has the potential to be a very talented player.”

“Only time will tell whether he will be and wants to be a really good player,” Nicklaus said. “For now, I just want him to enjoy the experience, just as I will enjoy it. Oh, and guess whose tee shot we’ll be playing most of the time?”

The tournament is Dec. 16-17 at The Ritz-Carlton Golf Club Orlando at Grande Lakes.

The eligibility is for players who have won a major or The Players Championships. Their partner must not have a PGA Tour card. The format is a 36-hole scramble.

The other wrinkle this year is former British Open champion Justin Leonard playing with his father, Larry. Newcomers to the field include Padraig Harrington and his son, Paddy. The defending champion is David Duval, who won last year with stepson Nick Karavites.

UIHLEIN’S TRAVEL: Peter Uihlein is finally a PGA Tour member, even if it might not feel like one just yet.

After five years in Europe, the former U.S. Amateur champion locked up his tour card by winning the first Web.com Tour Finals event. He started at the Safeway Open in Napa, California, and since then has gone to Malaysia, Shanghai, Turkey, South Africa and Dubai.

He still plans to play both tours, and there’s plenty at stake for him at the DP World Tour Championship in Dubai.

Uihlein had to withdraw from the Nedbank Challenge after opening with a 70 because of a stomach virus. He is No. 18 in the Race to Dubai, and if he stays in the top 20, he gets in the World Golf Championship in Mexico City.

“For me, getting in Mexico would be huge,” he said.

He also is No. 57 in the world, and with a strong field in Dubai, there’s an outside chance of cracking the top 50 and holding that spot until the end of the year to get in the Masters. Once 2018 rolls around, however, Uihlein plans to be in the U.S.

“I’ve got to play stateside with the way the FedEx Cup is,” Uihlein said. “But I’ll come back and play some Rolex events, especially in the summer.”

DIVOTS: Harvard Law School instructor Peter Carfagna has been elected chairman of the LPGA’s board of directors. The board added two independent directors — Jon Iwata, senior vice president and chief brand officer at IBM; and Tom Schoewe, retired chief financial officer at Walmart. Also joining the board next year is LPGA Tour player Marina Alex. ... Rickie Fowler had his 12th runner-up finish last week on the PGA Tour. ... Brandt Snedeker makes his return to the PGA Tour this week at the RSM Classic from a rib injury that caused him to withdraw from the British Open.

STAT OF THE WEEK: Five players have been No. 1 in the women’s world ranking — Lydia Ko, Ariya Jutanugarn, So Yeon Ryu, Sung Hyun Park and Shanshan Feng. That’s the most players for either the men’s or women’s world golf ranking in a calendar year.

FINAL WORD: “Good luck to all Q School guys tomorrow. A year from now, it’s possible to be where I am — heavier, discombobulated and offending the Irish.” — English golfer Eddie Pepperell on Twitter.