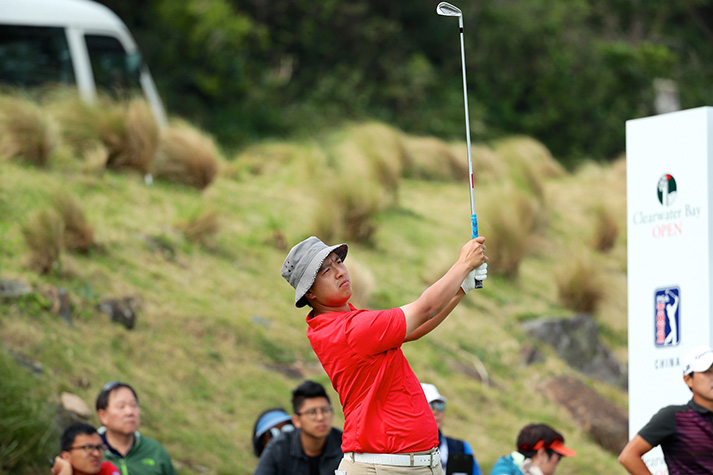 North Vancouver, BC's Eugene Wong Made Good Use Of His Recent Trip To Hong Kong With A Solid 3rd Place Finish In The Clearwater Bay Open. (PGA TOUR-China/Zhuang Liu)

HONG KONG (Laury Livsey/PGA TOUR-China) — Vancouver’s Eugene Wong has not had a memorable last two seasons on the golf course. Playing primarily in China in 2017, Wong, the University of Oregon product, missed three of five cuts and had a tie for 45th at the Beijing Classic for his best finish.

His 2016 wasn’t much better. Playing PGA TOUR-China a year ago, Wong had one top-10 and lost his playing privileges, finishing 66th on the Order of Merit.

Things just got a little brighter for Wong recently at the Clearwater Bay Open. After shooting three consecutive even-par rounds of 70, Wong fired a 4-under 66 at Clearwater Bay Golf & Country Club to finish third, two shots behind winner James Marchesani.

Wong traveled here for this one event — a tournament that allowed PGA TOUR-China to re-introduce itself after it didn’t conduct tournaments in 2017. In a way, Wong used this tournament to remind people why he won the 2010 Jack Nicklaus Award as the NCAA’s top golfer among the numerous awards he received during his sterling collegiate career.

“I struggled throughout the year. But I’ve worked hard. I feel like [my game] is getting back to where I want it to be,” explained Wong. “I’m moving in the right direction now. I played well. After September, I went back home and worked on my game,” Wong continued. “I knew I was getting pretty close. I just needed to fix a few things here and there. This week is a great course, and I like the environment here in Hong Kong.”

After only making nine birdies over the first three rounds, it was a birdie-fest on the Sunday as Wong rolled in seven that day, including four in a row on his back nine that put him in contention. Starting at No. 12, he made birdies of 22 feet, 10 feet, 12 feet and then a tap-in after a two-putt from 25 feet at the par-5 15th.

Coming from way back after starting the day at even-par, Wong knew he had to go low if he harbored any hope of catching the leaders. His attempt at five consecutive birdies missed even though “I had a good look at 16.”

He then couldn’t sink his birdie effort on the par-5 finishing hole, a 12-foot putt that slid by. “I hit it the way I wanted to. I just didn’t think it would break that much,” he said of his two-putt par. He did all this while watching the action below on the 18th hole following his round. Wong wanted to ensure that the third-place finish was his.

That was important because not only did it give him needed confidence and RMB 102,000 (approximately $19,500 CAD) into his bank account, he also earned tournament performance benefits.

“With those six starts and my plan to come back to PGA TOUR-China for Q School, I should have a more complete schedule for myself next year,” Wong added.

Before 2018 gets here, though, Wong will continue playing professional tournaments in China, hoping to capitalize on his solid play. The next week Wong would be in Taizhou, about 300 kilometres south of Shanghai.

“Then next year I’ll come back to for PGA TOUR-China and see what shakes out with the new schedule.”