The Ladies Are In Charge At Shuswap Lake Estates 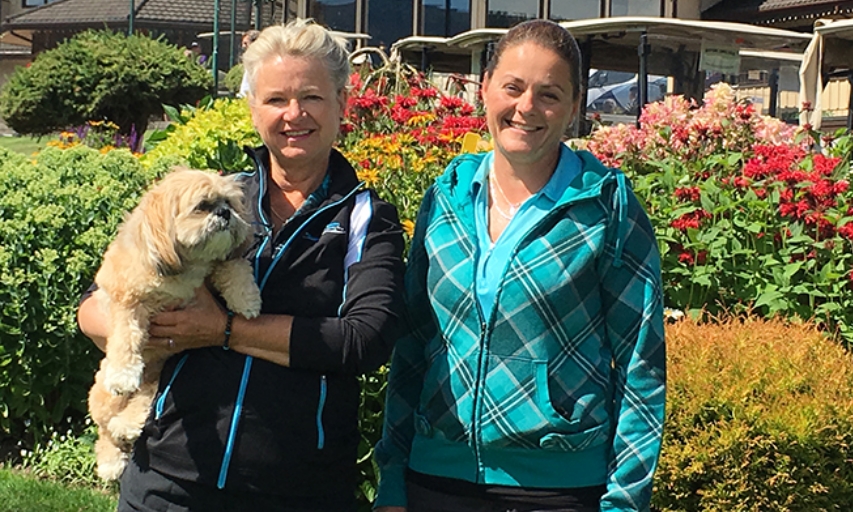 BLIND BAY, British Columbia (Brad Ziemer/British Columbia Golf) — Every day is Ladies Day at Shuswap Lake Estates Golf & Country Club. That’s because the women are in charge at the club, which this week is playing host to the B.C. Senior and Super-Senior Men’s Championship. They’re everywhere here.

The general manager is Wendy Barker. The course superintendent is Jen Rozek. Heck, even the pro shop’s resident dog, a five-year-old Shih tzu Bichon named Charlie, is a female. “We’re very proud of the fact that we have so many women here,” says Barker, whose father, Jack Barker, bought the course and surrounding property in 1977.

Barker is not aware of any other golf club in Canada that has a female GM and course superintendent. “My (five) sisters and I own the course and I manage it,” says Barker. “And Jen is the superintendent, so it’s female owner-operated from top to bottom.”

Shuswap Lake added a second nine in 1993. Its play is divided almost equally between members and tourists. There is lots of competition in the area, with the Salmon Arm, Canoe Creek, Hyde Mountain and Talking Rock courses all relatively close by.

Rozek became course superintendent in 2009 and Barker says she and her crew have done marvelous work getting Shuswap Lake into terrific shape. “The superintendent at that time wasn’t doing something right and we almost lost some of the fairways,” Barker says. “She took it over and got it up to a standard that is amazing.”

Rozek believes she is the only current female course super in B.C.  “I have heard there is maybe a half dozen of us (women superintendents) throughout the country,” Rozek says. “There used to be a few in B.C., but as far as I have heard I am the only one right now.”

Rozek grew up in Christina Lake and decided she wanted to work outdoors. After stints doing tree-planting and working in nurseries, she landed a job at Christina Lake Golf Club, where course superintendent Steve Barwick recognized her potential. “I’m guessing he saw in me that I wanted to learn,” Rozek says. “He took me under his wing and showed me everything right from the get-go. I consider Steve to be one of my mentors.”

She worked at Fraserview Golf Course under superintendent Mike Ferdinandi while she earned her turf management diploma at Kwantlen University in Langley. She joined Shuswap Lake Estates as assistant superintendent in 2008. She was appointed super in the summer of 2009. A couple months after that she learned she was pregnant.

The timing wasn’t great, but Rozek says she got strong support from both Barker and her grounds crew staff. “I was due April of the following year,” she says. “I was really nervous about that. But I have a great crew. They ended up rallying around me and helping me out. I was only off for two and a half months and then I came back to work. They kept the course going for me and got it looking good. I was a little worried how management would take it but they were fine with it.” Her son Chess is now six years old.

Rozek has a staff of 12, including herself, and starts work at 4 a.m. She often doesn’t go home until 2 or 3 in the afternoon. She is active with the Canadian Golf Superintendents Association and has received nothing but support from her mainly male peers.

“When I first joined the association, here I was pregnant and the only woman in the room and oh, my goodness,” she says with a laugh. “But they were a great welcoming bunch of guys and I never felt any sort of intimidation. There was a lot of ‘here’s my number, you call me if you have any questions.’ It has been great.”

For the record, Rozek has two other women on her staff this summer. She also has a dog, Divot, a blue heeler cross, that helps chase the geese away. And yes, it’s a female, too.