Woods Says He’s On The “Other Side” Of Pain, Loving Life 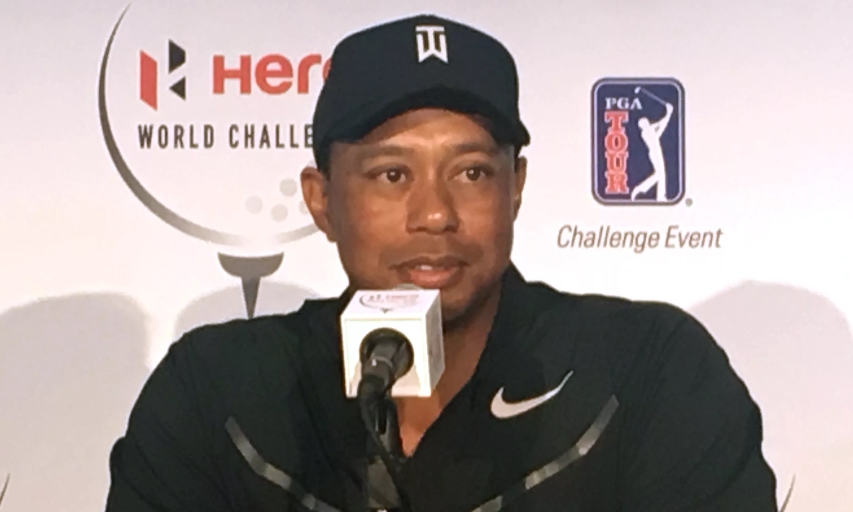 NASSAU, Bahamas (Doug Ferguson/AP) — Tiger Woods says he is on the “other side” of too many years relying on pain medication to cope with his back surgeries, which led to his arrest on a DUI charge six months ago that he attributed to a bad mix of prescription drugs.

Woods is making yet another return to competition this week at the Hero World Challenge, an 18-man event with no cut at Albany Golf Club. It’s his first tournament in 10 months and his first time competing since fusion surgery in April, the fourth operation on his back.

Early indications are that Woods is in a much better spot than when he returned a year ago in the Bahamas. According to those who played with him in recent weeks, his swing looks faster and more fluid, and Woods appears to be happy and healthy.

Woods reached a low point on Memorial Day when he was arrested in the middle of the night after Florida police found his car parked awkwardly on the side of the road about 15 miles from his home, with Woods asleep behind the wheel, the engine running and a blinker on.

Toxicology reports revealed that Woods had two painkillers (Vicodin and Dilaudid), a sleep drug (Ambien), an anti-anxiety drug (Xanax) and the active ingredient for marijuana in his system. He went through an in-patient treatment program to deal with prescription medication, and last month pleaded guilty to a reckless driving charge that allowed him to avoid jail time.

“I’ve come out the other side and I feel fantastic,” Woods said. “A lot of friends have helped me. I didn’t realize how bad my back was. Now that I’m feeling the way I’m feeling, it’s just hard to imagine that I was living the way I was living with my foot not working, my leg not working and then the hours of not being able to sleep at all because of the pain.”

Woods attributed the Memorial Day arrest to “trying to go away from the pain.”

“I was trying to sleep, which I hadn’t done in a very long time because of the things I’ve been dealing with,” he said. “So as my back improved, I’ve been able to start sleeping again because I don’t have the nerve pain going down my leg. I don’t have my leg twitching all over the place. I don’t have these issues anymore.”

Woods hasn’t won since the 2013 Bridgestone Invitational, his 79th title on the PGA Tour that leaves him three short of tying Sam Snead’s record. That might have been the last time he had reasonable health.

There were small signs of back pain a week later at the PGA Championship, and what followed were three surgeries and a stop-and-start schedule. Woods had his first back surgery, a microdiscectomy, a week before the 2014 Masters. Since then, there have been four occasions where he returned either from back surgery or from taking time off to let his injuries heal.

The fourth surgery was to fuse two discs in his lower back. That was more about the quality of life than trying to win a golf tournament. The fact that Woods is even playing his holiday exhibition just over seven months after surgery, and six months after that embarrassing arrest, feels like a bonus.

“I missed playing golf for fun,” Woods said. “I hadn’t done that in two years. I played nine holes here and 18 holes here, and then I have to take three days off because my back was killing me.”

Woods returned from a 15-month layoff a year ago at the Hero World Challenge, and while he finished 15th in the 18-man field, he made 24 birdies, raising hopes. He never spoke of being in pain last year, or even at Torrey Pines in January. He then flew to Dubai and withdrew after a 77, citing back spasms.

The difference this time, Woods said, is that he doesn’t feel pain, and he thinks now he can take on any shot. He said when he looks back on his performance last year in the Bahamas, it seems as though he were in slow motion.

“I didn’t realize how bad my back had become and how much I was flinching and just how slow I was,” he said. “I didn’t realize it because it’s been a slow, degrading process. I thought I had some speed, thought I was playing halfway decent, shot some good scores, but now I’ve looked back on it and man, I didn’t even have much at all.”

He’s not sure what he has now.

The tournament starts Thursday. It will be the first time since Feb. 3 in Dubai that Woods has to count every shot.