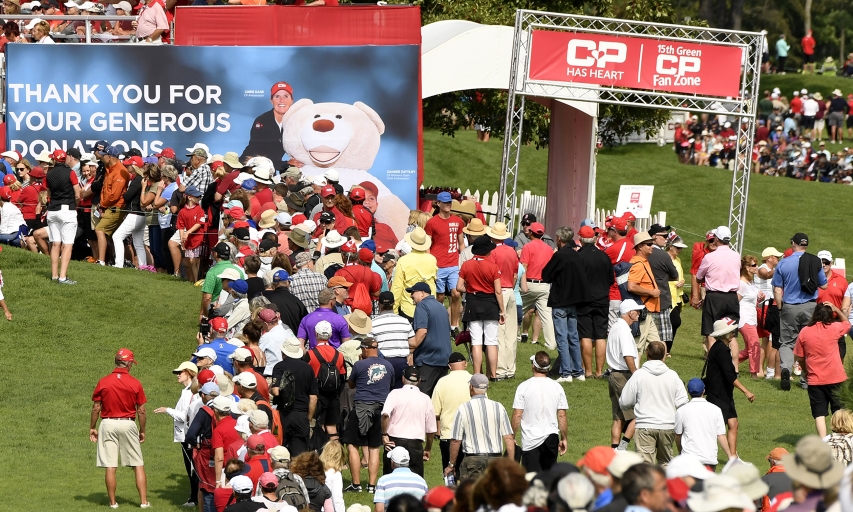 The success of the 2017 CP Women’s Open continued this past week as the LPGA Tournament Owners Association (TOA) presented Golf Canada and Canadian Pacific (CP) with a Gold Driver Award for Best Charity / Community Engagement among all LPGA Tour events.

The annual TOA Gold Driver Awards were hosted in conjunction with the LPGA’s season-ending CME Group Tour Championship at The Ritz-Carlton Golf Resort in Naples, Fla. The TOA was formally established in 1990 and is composed of owned and operated LPGA Tour events.

As part of their sponsorship of the event, Canadian Pacific through its CP Has Heart campaign, raised $2 million in support for the Children’s Hospital of Eastern Ontario (CHEO) to help fund a renovated catheterization lab and interventional suite.

“This award is the result of a total team effort and we share it with our friends at CHEO and countless community supporters, as well as CP’s staff, event partners and our CP golf ambassadors Brooke Henderson and Lorie Kane,” said Keith Creel, CP President and Chief Executive Officer. “CP supports heart health because it is an issue that touches so many Canadians. Together with our partners at Golf Canada and everyone involved with the CP Women’s Open, we are proud to leave a lasting charitable legacy in Ottawa through CP Has Heart in support of CHEO’s incredible work.”

The total charity contribution was the result of several fundraising activities tied to the CP Has Heart campaign. Through CP Birdies for Heart, CP contributed $5,000 for each birdie made by a player on the 15th hole at Ottawa Hunt and Golf Club during tournament play with a total of 45 birdies representing a $225,000 donation. CP also matched all donations made online at cheoheart.com from April 1 to the end of the tournament.

In the four years of CP’s title sponsorship of the CP Women’s Open, $6.5 million has been raised to support children’s heart health in Canada.

“It is incredibly rewarding to see the CP Has Heart campaign honoured by the LPGA Tournament Owners with a Gold Driver Award for Best Charity/Community Engagement,” said Golf Canada CEO Laurence Applebaum. “Thanks to tremendous fan, player and partner support, the 2017 CP Women’s Open was a resounding success and it is most deserving that CP’s community impact has been recognized with this meaningful award.”

The 2017 CP Women’s Open saw rookie sensation Sung Hyun Park card a final-round 64 to capture Canada’s National Open Golf Championship just weeks after earning her U.S. Women’s Open title.  Park went on to share Rolex Player of the Year honours with fellow Korean So Yeon Ryu, making her the first player since Nancy Lopez in 1978 to win both Player and Rookie of the Year honours in the same season.

The 2018 CP Women’s Open will mark the first time the province of Saskatchewan will host a major LPGA Tour event when the world’s best players challenge Regina’s Wascana Country Club August 20-26, 2018. Through the CP Has Heart campaign, CP will once again make a substantial donation to the host community by supporting pediatric cardiology at the new Jim Pattison Children’s Hospital, which is currently under construction and scheduled to open in 2019.

INFORMATION REGARDING TICKETS AND CORPORATE HOSPITALITY FOR THE 2018 CP WOMEN’S OPEN CAN BE FOUND AT WWW.CPWOMENSOPEN.COM.