Fowler Beats Tiger At Home And At The World Challenge 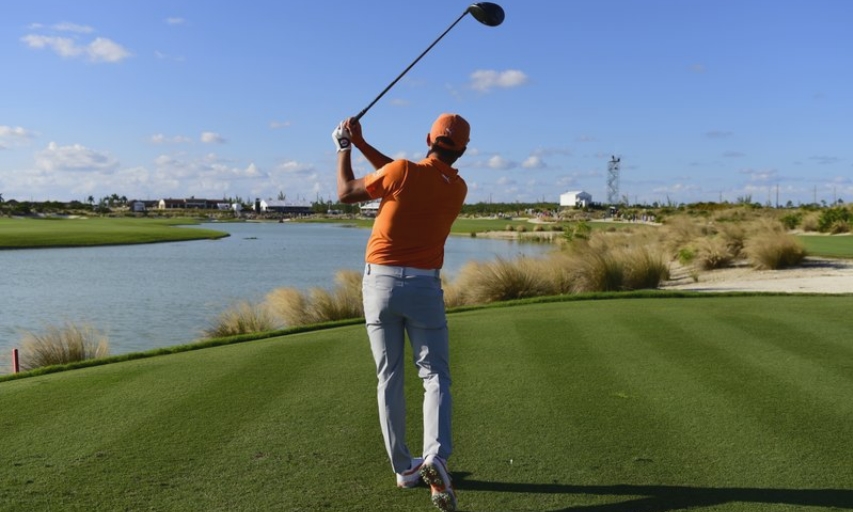 Rickie Fowler Watches His Shot From The 18th Tee During The Final Round Of The Hero World Challenge. (AP Photo/Dante Carrer)

NASSAU, Bahamas (Doug Ferguson/AP) — Rickie Fowler isn’t winning as much as he would like. He’s still undefeated against Tiger Woods over the last month.

According to Fowler, anyway.

They played in Florida as Woods began working toward a return to competition from his fourth back surgery. Woods said it was young players like Fowler, Justin Thomas and Daniel Berger who motivated him, encouraged him and at times helped him understand where his game was at.

Fowler and Woods both left the Hero World Challenge with plenty of optimism for the new year.

Fowler rallied from a seven-shot deficit by opening with seven straight birdies and closing with an 11-under 61, the course record at Albany Golf Club, for a four-shot victory over Charley Hoffman that moved him to No. 7 in the world.

Woods had three rounds in the 60s, and even with back-to-back bogeys, he closed with 68 on Sunday and tied for ninth in the 18-man field. It still was his best result since a playoff loss in this holiday event in 2013 when it was held at Sherwood Country Club in California.

“I’m excited the way this week has gone on,” Woods said. “It was a very good week.”

As for those matches in Florida?

“I was 1 down after nine and he went to go play nine holes with Sam,” Fowler said, referring to Woods’ 10-year-old daughter. “I think we both shot 65 on a day that it wasn’t playing easy, typical kind of south Florida wind. It was never like a match was given to anyone.”

There were other times when they played for fun. More than who lost the bets and for how much was that Woods was playing again, and playing a lot.

“It’s been cool to see Tiger able to be back playing at home, or even here, just out having fun and healthy,” Fowler said. “One of the times we played 18 holes, I was going to go back to work out. And he went and played another nine.”

As much as Woods gives credit to Fowler and the kids for bringing him along, maybe it was Woods who helped Fowler.

Fowler had taken off five weeks after the Presidents Cup when he played two rounds with Woods to get ready for the OHL Classic in Mayakoba, Mexico, the only official PGA Tour event he played in the fall portion of the schedule. Fowler shot four rounds in the 60s and finished one shot behind Patton Kizzire.

They played two or three times before Thanksgiving, and when Fowler returned to golf in the Bahamas, he turned in the best closing performance of his career.

“I think he sharpened me up a little bit,” Fowler said with a grin. “I’ve gotten a little scared of how good he was playing at home, thought I needed to start playing a little bit better or something.”

Fowler is not always known for a fast start. In three majors this year, he stumbled at the start of the round and then made a big charge late — especially at the PGA Championship — until he ran out of holes.

That wasn’t the case in the Bahamas.

Fowler was seven shots out of the lead — three shots ahead of Woods — and he was leading before he even made the turn.

He holed birdie putts of about 12 feet on the first two holes, hit a gap wedge to 3 feet on the par-5 third, made his toughest putt into the green from 15 feet on No. 4, and then holed a bunker shot on No. 5. Fowler followed that with another wedge that spun back to a foot on the par-5 sixth, and he hit out of a bunker to about 7 feet on the next hole.

“You just try and ride her till she bucks you, you know?” Fowler said. “Ride until the horse kicks you off.”

He made par on No. 8, ending his streak. Fowler recalled starting a round with seven straight birdies when he was 17 at the Polo Match Play at Sea Island. He wanted a personal record, but figured if a birdie streak was going to end, let it end with a par and nothing worse.

And by then, Hoffman couldn’t do much about it.

Hoffman closed with a 72 to finish alone in second. Tommy Fleetwood (67) and Jordan Spieth (69) tied for third.

The scores will show that Woods finished 10 shots behind in a tie for ninth, and even though he drove the green on the par-4 seventh and made eagle, and shot 31 on the front nine for the second straight day, he was never in contention.

But this was about more than a score.

He was strong from start to finish. Woods said there were no issues with his back, and that 2-iron he quickly and violently recoiled with a shot in the par-5 third hole showed that. He made only one double bogey, a big improvement from last year. And he already was looking ahead to 2018. He said he would take the next few weeks to figure out what kind of schedule he would play.

And there would still be time for rounds at home against some of the world’s best.

“I’m sure the guys will have some denominations they want to play for,” Woods said. “They want to compete. They want to see me back out there. And it’s really nice to have that type of camaraderie.”