A Strong Tiger Woods Is A Good Starting Point 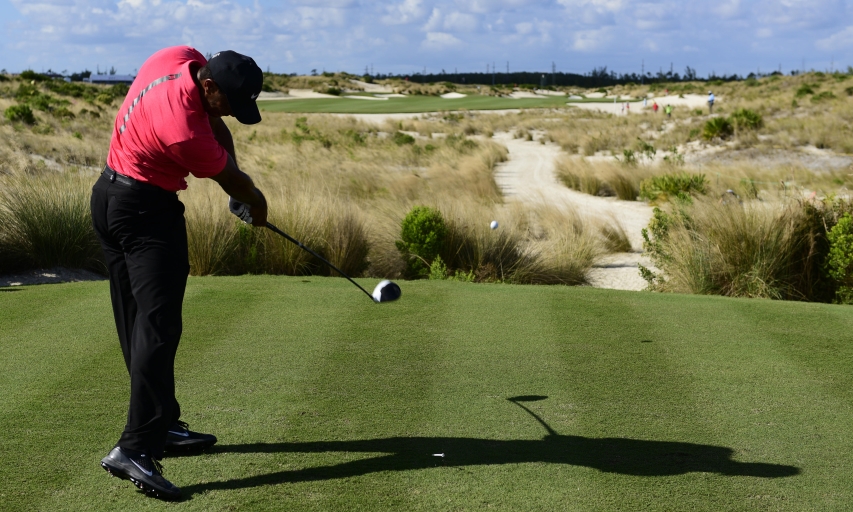 Tiger Woods Tees Off From The 14th Hole During The Final Round Of The Hero World Challenge. (AP Photo/Dante Carrer)

NASSAU, Bahamas (Doug Ferguson/AP) — It wasn’t the best shot Tiger Woods hit all week. It might have been the most telling.

He had 271 yards to the par-5 third hole at Albany Golf Club, a tropical breeze working against him. Woods went with a 2-iron. He held nothing back on the swing and then quickly recoiled the club as he watched it soar against the blue sky toward the flag.

That it rolled through the green and down a slope wasn’t the issue.

“I thought it was money,” Woods said.

So did Justin Thomas, the PGA Tour player of the year who was paired with Woods in the first and final rounds of the Hero World Challenge.

“I didn’t say anything,” Thomas said. “I just looked at him. I was like, ‘That was pretty good.’”

This was his fourth day of his first tournament in 10 months after recovering from a fourth back surgery. He was as strong Sunday as when he started. He was like that all week, and the state of his health was far more important than his scores.

His scores weren’t too bad, either.

Woods had rounds of 69-68 to start, struggled in the worst of the wind for a 75 on Saturday, and then closed with a 68 despite finishing with back-to-back bogeys. He finished 10 shots behind and never had a chance to win. He also tied for ninth against an 18-man field, his best result in four years.

Woods always keeps score. At some point, results will matter more than his health to everyone else.

“I knew I was going to be able to play all four rounds. That wasn’t going to be an issue,” Woods said from the broadcast booth, fulfilling his role as tournament host. “The issue was how was my scoring going to be? How was my feel? How am I going to get used to the adrenaline in my system for the first time in a while? That took a little bit of time. I was still good with my irons. I drove it pretty good all week, made some good putts. But overall, I’m pleased.

“I showed some good signs,” he said. “I hit some really good shots out there, and a bright future.”

Woods will be 42 the next time he plays. His age, not to mention four surgeries on his left knee and four on his back, means he no longer has time on his side.

This was only the second time he completed 72 holes — both times in a tournament with no cut — since he tied for 10th at the Wyndham Classic in August 2015, a month before he went through his second and then third back surgery.

The next step for Woods is building a schedule.

“We’re going to figure out what’s the best way for me to build my schedule for the major championships,” Woods said. “Play enough, but don’t play too much. I don’t know what golf courses I’ll be playing and what’s the best way to go about it. We’ll sit down with the whole team and we’ll figure it out.”

The best bet is the Farmers Insurance Open at Torrey Pines, where Woods has eight professional victories, one of them the 2008 U.S. Open. His foundation runs the Genesis Open at Riviera, where last year Woods wasn’t even healthy enough to get out of bed for a news conference.

A rush to judgment is dangerous — not only for his golf, but his back.

Woods has never been forthcoming about his injuries, especially concerning his back. Go back to the Dubai Desert Classic on Feb. 2, when Woods opened with a 77 in relatively benign conditions. “I wasn’t in pain at all,” Woods said after that first round.

The next day, he cited back spasms for withdrawing. Two months later, he had fusion surgery on his lower back.

So the question was raised Sunday whether he would even say if his back was hurting him.

“Yeah, I would tell you,” he said, and followed that by saying it was not.

There was little reason to doubt him this time. Whether he was ducking under the rope to get to the practice range or stepping in and out of bunkers, he looked like the Woods of old instead of an old Woods.

More than anything, it was the swing.

Woods easily kept up off the tee with Thomas, and at times drove it past him. Ditto for his second round with Henrik Stenson, and Hideki Matsuyama. Length is not an issue. He made more mid-range putts than he has in recent returns. His chipping raised concerns, though the grass was so tight and thin at Albany that it wasn’t easy for anyone, even Jordan Spieth, one of the best with those shots.

“I’m sure he would be the first to tell you that he still has a lot to do in terms of getting back to where he wants to be,” Thomas said. “But he’s definitely moving in the right direction. I think it will take a couple more tournaments to kind of get the juices going. ... I think if he stays healthy like this, I think he’ll be fine.”