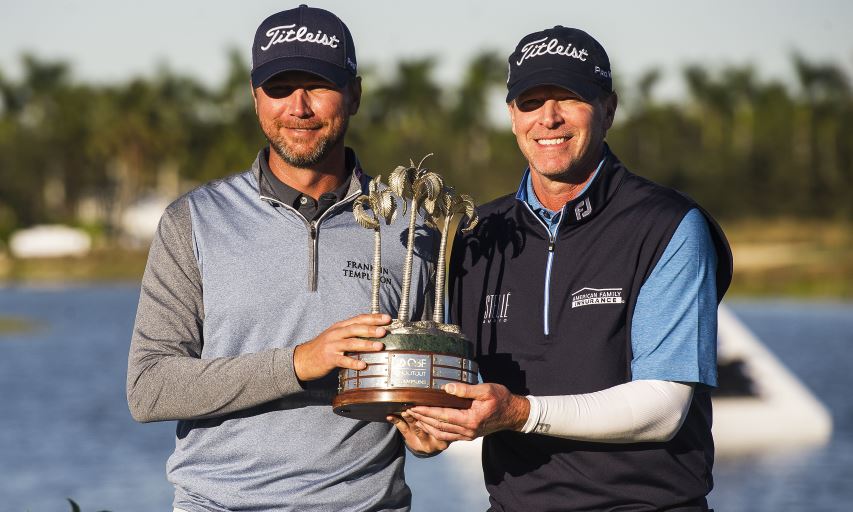 Sean O'Hair (L) And Steve Stricker Hold Up Their Trophy After Winning The Final Round Of The QBE Shootout. (AP Photo/Logan Newell)

Stricker and O’Hair closed with an 8-under 64 for a two-shot victory over Graeme McDowell and Shane Lowry, effectively clinching it when O’Hair made an eagle on the par-5 17th hole at Tiburon Golf Club.

In the final round of better ball, Stricker and O’Hair rallied from a two-shot deficit on the front nine, built a two-shot lead through 14 holes and were ahead by one shot heading to the reachable 17th with the green guarded by a huge bunker with a vetted, waist-high wall.

O’Hair hit 7-iron from 195 yards over the bunker and it bounced onto the green about 12 feet away. McDowell and Lowry both hit into the bunker, with Lowry’s ball against the face of the wall that forced him to play sideways into the bunker. Both players had to settle for par, and O’Hair rolled in his eagle putt for a three-shot lead.

“He played great today,” Stricker said. “He hit a great shot on 17. That’s the stuff you need to do to win a tournament, and Sean pulled it off.”

McDowell holed a 25-foot birdie putt on the 18th hole as he and Lowry closed with a 66.

Lexi Thompson, the only LPGA Tour player in the 12-team field, and Tony Finau closed with a 66 and tied for fourth.

O’Hair was playing for only the second time since he had surgery after the BMW Championship in Chicago to clean up cartilage in his right knee.

“This is always a great event to finish the year off with, and to pull this off is special,” O’Hair said. “But to do it with Steve is even that much better for me. I’m a golf geek, so he’s a friend of mine, but still it’s kind of hard not to look at him and kind of put him a little bit up on a pedestal.”