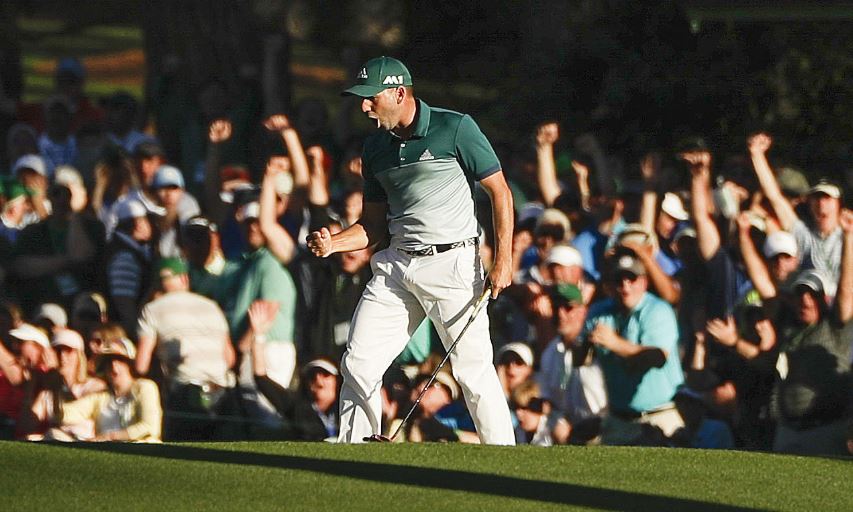 Sergio Garcia Reacts After Putting In For An Eagle On The 15th Hole During The Final Round Of The 2017 Masters. Garcia Considers It The Most Memorable Shot Of His Masters Victory. (AP Photo/Matt Slocum, File)

Jordan Spieth won the British Open with a flourish at the end. Justin Thomas hit 7-iron that had to be perfect for him to seal his first major at the PGA Championship.

Both wonder if they would have been in position to win if not for key shots earlier in the week.

It’s like that just about every year. There is a signature shot from a major, the one that gets replayed more than the others. And there is another shot — or one moment, as was the case for Masters champion Sergio Garcia — that is just as meaningful to them.

For all the Sunday drama at Augusta National, Sergio Garcia made only one birdie on the back nine in regulation. The signature shot of this Masters, however, led to eagle. After smashing a drive on the par-5 15th, Garcia hit 8-ironthat nicked the pin and set up a 15-foot eagle putt to tie Justin Rose for the lead.

“One of the best shots I hit all week,” Garcia said.

Just as meaningful to him was the 15th club in his bag — the space between his ears.

Garcia had every reason to believe this major would turn out like so many others when he began the back nine with two bogeys to fall two shots behind, and then watched his tee shot on the 13th bounce off a tree into the hazard .

“Funny enough, most other weeks I would have been thinking, ‘Here we go. What’s going on?’” Garcia said.

Instead, he was determined to make par. After a drop, he hit a baby hook with the 9-iron down the fairway and was in position from 89 yards to save par.

“The most important thing was that I felt calm throughout the whole thing,” he said. “That calmness gave me confidence. I was like, ’It’s OK. You’re doing everything right. You’re playing great. It’s your time.”

Brooks Koepka pulled away at Erin Hills with four straight one-putts — a par save on the 13th and three birdies. The clinching moment was his birdie on the par-3 16th, where his 9-iron came back to the front section of the green for a putt that allowed him to go four shots ahead.

“We thought it might be up top, and it was a relief to see it at the bottom and have a putt at it,” Koepka said. “I just remember saying, ‘Get it there.’ I started it on line, and I was looking at it with disbelief that it’s going in. In my mind, you are in complete control at that point. The only thing you can do from here is mess it up.”

Koepka knew he was in control a few holes earlier, a shot that he recalled without any hesitation.

He put it in the greenside bunker and got up-and-down for birdie.

“That’s probably a moment a normal person wouldn’t think anything of it,” he said.

Jordan Spieth saw his 50-foot eagle putt that gave him the lead for good at Royal Birkdale differently than anyone watching on television or anyone else.

“I knew it was going to bend a little bit to the right as it went down off the slope to the bunker,” he said. “And then when it gets to the valley, the hole is on a 3-degree slope going the other way, into and off the right. So it’s going to be a downhill left-to-right, and then it double breaks into uphill right-to-left.”

“Go get that,” he told caddie Michael Greller after making the putt .

“I like those putts,” he said. “They become total feel. That’s what I needed at that point in time, to get the technicality out of it.”

The finish is famous. Overlooked was a shot in the second round that Spieth felt kept him from a mini-meltdown. Right when the rain started pounding, Spieth drove into a pot bunker on No. 10, punched out and then hit his third shot long and to the right. Facing bogey or worse, he chipped in for par.

“I hit a beautiful chip that went in that kept momentum going in the worst of the weather that we experienced that week,” Spieth said. “That chip shot was massive at that point because I was faltering. I could have made bogey or double easy.”

“I know it’s not what I would usually hit,” Thomas said. “But it was a situation where I did not want to ease off something. My adrenaline was going so much, I was hitting it well and I could turn it toward the pin. I made a perfect swing.”

The ball landed on the front of the green and set up a birdie putt that sent him to the final hole with a three-shot lead.

Much like Spieth, however, Thomas recalled a short-game shot earlier in the tournament that could have turned his fortunes. It was Thursday morning. He started on the back nine and was 2 over with three holes left, starting with the par-5 seventh. That’s a birdie hole if he can get it into the fairway. He hit into the water and made bogey.

Then, he flew the green on No. 8, and suddenly an opening-round 75 was a real possibility.

“I could not have been in a worse place,” Thomas said. “I was 7 yards over the green on a down slope. And now I have a chip that I have to get up-and-down or I’m 4 over and it just changes everything. Now I go into Friday grinding to make the cut.

“I hit one of the most ridiculous flop shots I’ve ever hit.”