Justin Thomas Raking In Cash And Playing For Trophies 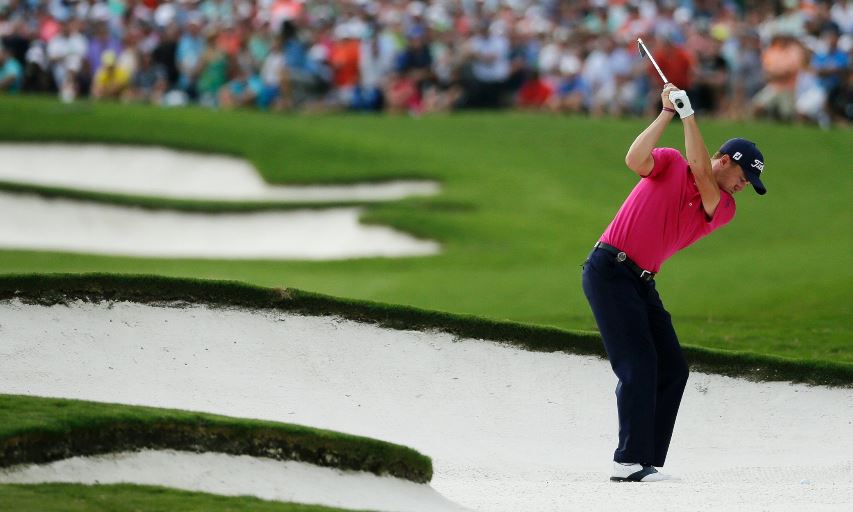 Justin Thomas Won His First Major With Key Shots At The Start And Finish Of The Tournament. (AP Photo/Chuck Burton, File)

Justin Thomas has earned about $25 million in his three years on the PGA Tour. That includes his bonus from winning the FedEx Cup this year. It does not include endorsement money from the likes of Titleist, Citi and Polo.

He has a better grasp of his percentage making putts inside 10 feet than the size of his bank account.

Thomas appreciates the money as a measure of success. The 24-year-old just doesn’t see it as much more than that.

“I’m truly playing because I want to win a lot — a lot — of golf tournaments and majors and hopefully have a Hall of Fame-type career. The money really is just a bonus. I’m sure a lot of people honestly don’t believe me, but I don’t know. I’ve never once thought about the money.”

It’s only a problem this time of the year — not for him, but those trying to buy Christmas presents for him.

“My parents and girlfriend get so mad because they say it’s so hard to get something for someone who already has everything,” Thomas said. “I told them, ‘I don’t care, I don’t need anything, I don’t want anything.’ I told them I can always use more stuff for my house, but they don’t think that’s a very good Christmas present.”

As a teenager, Thomas said his parents used to save one big present that they hid until he was done unwrapping his other presents. One year, he spotted a golf club box under the sofa. It was a Scotty Cameron putter. He still has it.

“That was a pretty cool gift,” he said.

Note to parents: He has plenty of putters.

Thomas couldn’t think of the last time, even as a kid, that he was motivated by money so he could buy something. He did buy a house in Jupiter, Florida. Then again, he was always going to get a house.

“It just was either going to be a little more expensive or less expensive than I thought,” he said.

THAI’S CHOICE: Kiradech Aphibarnrat probably doesn’t know much about Ted Williams, and the similarities are thin. Even so, the Thai golfer faces a situation where playing the final event of the year could determine whether he gets into the Masters.

Williams played the final three games of the 1941 baseball season, going 6-for-8 in a doubleheader on the last day for a .406 batting average. No one has hit .400 in the majors since.

Kiradech, currently at No. 51 in the world, is projected to finish the year at No. 49 in the world — the top 50 are assured invitations to the Masters.

However, he won the Thongchai Jaidee Invitational a few weeks ago on the Asian Development Tour, and that made him eligible for the Boonchu Ruangki Championship. Out of respect to Boonchu, an esteemed figure in Thai golf, Kiradech is in the field for the final event of the year on Asia’s satellite tour.

The field is so weak that only 10 points are awarded to the winner (PGA Tour events have a minimum 24 points to the winner).

By adding an event, Kiradech will lose points from his tie for 18th in the Dell Match Play in 2016, and he would stay outside the top 50. The only way to compensate for the loss of points would be to earn them back. Only the top 12 places earn points in the ADT event.

A world ranking specialist, who goes by “Nosferatu” on Twitter, projects that Kiradech would have to finish in the top 10 to move into the top 50.

A few things are working in his favor. Kiradech has finished in the top 10 in his past four starts, including the DP World Tour Championship in Dubai. Even if he has an off week, the Masters takes the top 50 in the world ranking published March 25. And because Kiradech is not a PGA Tour member, he would be a strong candidate to receive a special international invitation from Augusta National.

JACK & TIGER: Justin Thomas faced six consecutive questions about Tiger Woods in a news conference in the Bahamas. That’s nothing. Jack Nicklaus has been getting Tiger questions for 20 years.

But he got a different variety and gave a playful answer a few weeks ago at the PGA Tour’s annual tournament meetings attended by tournament staff and tour board members.

Nicklaus made an appearance. Andy Pazder, the tour’s chief of operations, was the host and offered up a mix of golf and football. Nicklaus’ grandson, Nick O’Leary, is a tight end for the Buffalo Bills.

“Would you rather have a 19th major championship or see Nick catch the winning touchdown in the Super Bowl?” Pazder asked him.

Nicklaus brought the house down with his reply.

JACKETS AND JUGS: Jordan Spieth didn’t realize that winning the British Open would turn him into a father.

Spieth said he and his longtime girlfriend, Anne Verret, have joked about how they treat golf’s oldest trophy.

“Seems like we have a child. She’s said that a few times,” Spieth said. “Especially the first few months, it went everywhere with me.”

Spieth wanted everyone on his team to be able to share in the achievement, so he sent the jug out to Michael Greller in the Seattle area. Verret delivered it personally, taking it with her on the plane.

That would be one difference between the claret jug and that green jacket he won at the Masters in 2015.

“It was always in my hands,” he said. “I never let anybody have control of that without me knowing.”

Greller, meanwhile, took the jug with him to Chambers Bay, where he used to caddie when the course opened and where Spieth won the U.S. Open. Greller said he took a picture of the jug on every tee.

DIVOTS: Give an award for consistency to Paul Casey. He earned gained 188.78 and lost 185.77 world ranking points this year. He started the year at No. 14. He ends the year at No. 14. ... Kevin Chappell tested new equipment through the fall and wound up with his Nike irons. He is working closely with Miura Golf, which has a spare set of his irons as it tries to provide something that works for him. “If I were to go anywhere, that’s probably where I’d go,” Chappell said. ... U.S. Open champion Brooks Koepka is tweaking his West Coast swing next year. He plans to play the AT&T Pebble Beach Pro-Am instead of the Genesis Open at Riviera.

STAT OF THE WEEK: Justin Rose finished the year with 10 consecutive top 10s, including three victories.

FINAL WORD: “I hope that’s my first tournament of the year for the rest of my career.” — Justin Thomas on going to the Sentry Tournament of Champions at Kapalua.