Woods’ Back Among Top Questions In New Year In Golf 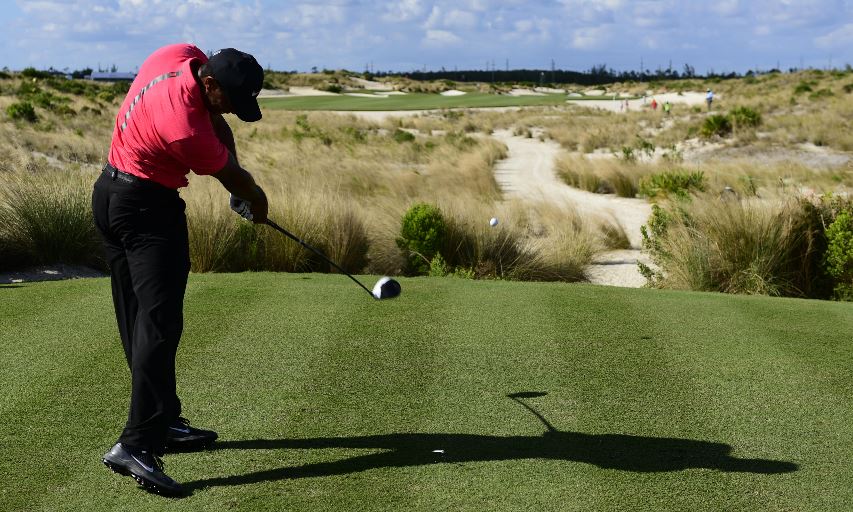 Tiger Woods Tees Off From The 14th Hole During The Final Round Of The 2017 Hero World Challenge. How Woods Fares This Year Is One Of The Top Story Lines For 2018. (AP Photo/Dante Carrer, File)

KAPALUA, Hawaii (Doug Ferguson/AP) — The PGA Tour rings in the new year at Kapalua for the 20th straight time. After all these years, the one moment that stands above all others was the titanic battle between Tiger Woods and Ernie Els in 2000.

Both made eagle on the 18th hole to force a playoff. Both made birdie on the first extra hole. Woods ended it with a 35-foot birdie putt on the next hole that was downhill and into the grain with about 6 feet of break. Equally memorable was what Els said when it was over:

Woods turned 42 on Saturday. He’s still not bigger than Jack Nicklaus when it comes to golf’s ultimate yardstick, most majors won.

But he’s still Tiger, and that means a lot.

He commands more attention than major champions nearly half his age. And that’s why Woods, who makes golf must-see TV when he’s playing, leads the list of five questions to consider for 2018.

WHAT TO EXPECT FROM TIGER?

The question wasn’t much different a year ago.

Woods returned to the Hero World Challenge after a 15-month recovery from two more back surgeries, and more was made of his 24 birdies than finishing 15th against an 18-man field in an unofficial holiday event. When the new year began, he lasted three rounds over two tournaments and was out again.

This time, he is returning from fusion surgery on his lower back. Most noticeable last month in the Bahamas was his power, and Woods said in a recent blog that he is hitting a full club longer than he was before. Adding to the higher level of optimism is the amount of golf he played leading up to his return — and not the score, but the company. Rickie Fowler, Justin Thomas, Dustin Johnson and Daniel Berger all played with Woods and liked what they saw.

The measure will be the full schedule that he wants to play, though he has not said what or where that would be. And if his health is as solid as he is letting on, golf will get a full dose of Woods in the majors for the first time since 2015.

WHO’S ON THE PLANE TO FRANCE?

The Americans haven’t won the Ryder Cup on European soil since 1993, two months after Jordan Spieth was born.

The Americans won the last Ryder Cup at Hazeltine, and they start 2018 with the top three players in the world ranking and five of the top eight. That means they will be favored on paper, and most American golf fans will be dismissive of Europe’s chances.

The more pertinent question is who goes to Paris for the matches?

Much attention will be on Phil Mickelson, who hasn’t missed a team competition since 1993 and is desperate to make the next one. He hasn’t won since 2013 and was a captain’s pick for the Presidents Cup.

The Americans had 14 players in their 20s win on the PGA Tour last year, and six of them were on the Presidents Cup team. Odds are not all of those six will be in France, and U.S. captain Jim Furyk could have some tough choices for his picks.

Sometime this summer, the PGA Tour will announce a significant overhaul to a schedule that for years has been predictable.

This is the last PGA Championship in August before it moves to May in 2019. Paring the number of PGA Tour events to achieve a Labor Day finish to the FedEx Cup won’t be an issue with the loss of one playoff event (Boston), moving one event to the fall (Greenbrier) and likely converting one into a World Golf Championship (Memphis).

The tough part is figuring out where everything else goes.

That starts with March, which currently features a pair of World Golf Championships (Mexico, Match Play) and next year adds The Players Championship. Something will have to give. Also, title sponsorships must be resolved for the Houston Open and possibly Colonial.

HOW WILL RORY MCILROY RESPOND?

For the first time since 2009, Rory McIlroy goes into a new year outside the top 10 in the world. Attribute that to nagging injuries that persuaded him to take a long break at the end of last year to get his health and game in order.

He will have gone more than three months without competition when he returns in Abu Dhabi, the start of an ambitious schedule in which he will play eight times before he gets to Augusta National.

Golf should have a good idea by then if McIlroy is back in the conversation.

WHO MAKES IT BACK TO PARADISE?

Justin Thomas said he would love nothing better than to start every year at Kapalua.

As good as he is, there’s no guarantee.

Only nine players from the 32-man field last year made it back to start 2018. Among the missing are Jason Day, who started last year at No. 1, and Bubba Watson, missing from the Sentry Tournament of Champions for the first time in four years. Spieth missed out in 2015. Rickie Fowler wasn’t at Kapalua last year.

There were 14 first-time winners last year on the PGA Tour. It’s not getting any easier to win.

That applies to Woods, too.