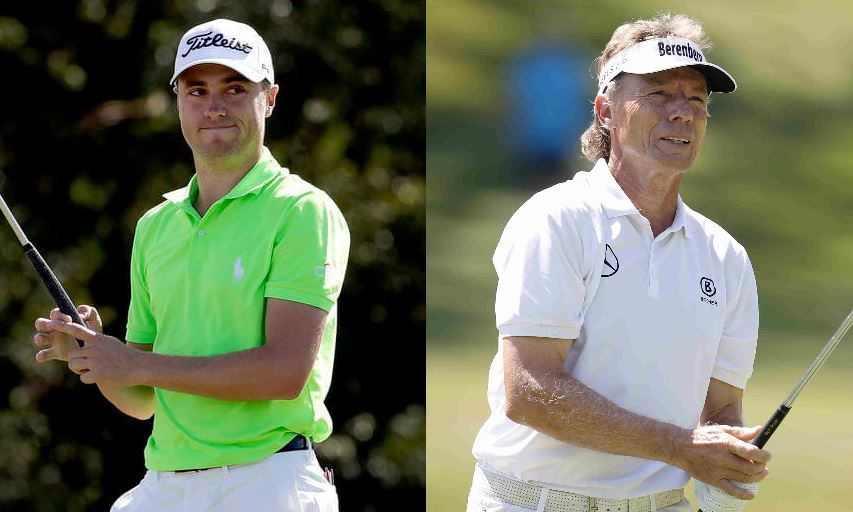 Lexi Thompson was named as the Female Player of the Year after winning twice on the LPGA Tour in a season that included soaring highs and emotional valleys.

It’s the first time that Thomas and Thompson have won the GWAA Player of the Year awards. Langer won it for the fourth time, having previously been honored in 2010, 2014 and 2016.

Thomas was the near-unanimous choice after winning four times in 2017 as part of his five-victory season in the PGA TOUR’s wraparound schedule. After winning the CIMB Classic in Malaysia in late 2016, Thomas won the first two events in Hawaii in 2017, picked up his first major championship victory at the PGA Championship at Quail Hollow Club and won the Dell Technologies Championship in the FedExCup Playoffs.

The 24-year old went on to capture the FedExCup title in a year that also included 12 top-10 finishes. He also had a 3-1-1 record for the winning United States Team in the Presidents Cup. He earned 94 percent of the GWAA vote.

“Being honored by the GWAA means a lot,” Thomas said. “Obviously a lot of hard work went into it, a lot of time. It was something that you can’t expect something like that to happen. I felt like I was capable of it. In terms of whether it will happen in the future, you never know but it was obviously a very fun year.”

“I am thrilled and feel very honored to have won the GWAA Golf Writers Award for the 2017 season once more,” said Langer, who received nearly 90 percent of the vote.

Thompson had an unforgettable 2017 season that included two LPGA Tour victories, six runner-up finishes and a controversial four-stroke penalty that prevented her from winning the ANA Inspiration early in the year. The 22-year old Thompson won the Race to CME Globe and also set the LPGA Tour’s single-season scoring record with a stroke overage of 69.114 to capture the Vare Trophy.

She won the award in a close vote over Sung Hyun Park and So Yeon Ryu.

“I am extremely honored and proud to be named female golfer of the year by the Golf Writers Association of America,” Thompson said. “2017 was an extremely challenging year for me and my family, both on and off the golf course.  But with the support, love and guidance of my mom, dad, and brothers, I was able to overcome these challenges and go on to have my best year as a professional golfer.

“I want to thank my fans from all around the world who have always supported me, because your kind words and encouragement continue to inspire me to pursue my dream. And thank you to the Golf Writers Association of America. It is truly a privilege to receive this award.”

Thomas, Thompson and Langer will receive their awards at the 46th ISPS HANDA GWAA Annual Awards Dinner presented by The PGA of America and USGA on April 4 in Augusta, Georgia.