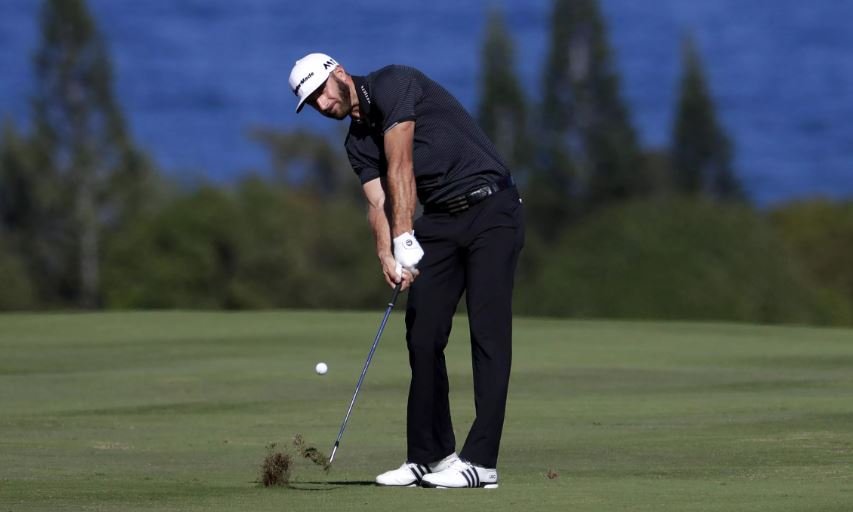 Dustin Johnson Hits From The Fourth Fairway During The Third Round Of The 2017 Tournament Of Champions. Johnson Is No. 1 In The World, A 33-Year-Old Entering His Prime Who Won Four Times Last Year. (AP Photo/Matt York, File)

KAPALUA, Hawaii (Doug Ferguson/AP) — Dustin Johnson sat outside the Honolua Store on the first day of the new year, scarfing down the “Hobo Breakfast” of steamed rice and eggs as the sun was just starting to filter through the Cook pines that line the entrance to Kapalua.

He abruptly closed the lid on his carton and announced, “Let’s go.”

That about sums up the anticipation of the start to a new year in golf.

Johnson is No. 1 in the world, a 33-year-old entering his prime who won four times last year. Right behind him in the world ranking are Jordan Spieth, Justin Thomas, Jon Rahm and Hideki Matsuyama, four players 25 or younger.

Still to come: another return of Tiger Woods, this time with strong indications that he is healthy again.

“I think this year, the unknowns are very exciting,” Spieth said. “I think with the amount of depth and talent at a younger age, mixed with the guys in their 30s that are playing — No. 1 in the world, D.J. — some other phenomenal players that you would call in maybe in their prime, and then obviously the major question, which is what’s it going to be like with Tiger coming back ... it’s a pretty special time to be a part of professional golf.”

The Sentry Tournament of Champions is reserved for those who did something special last year — win on the PGA Tour.

Even though Johnson, Spieth, Thomas and Matsuyama are among those who won multiple times last year, winning is not getting any easier. Only nine players who were at Kapalua a year ago made it back to paradise, and 14 players in the 34-man field are making their debut this week.

Thomas is the defending champion, courtesy of an 8-iron from 214 yards that settled 3 feet away for birdie on the 17th hole that secured his three-shot victory and sent him on his way to a season that ended with his first major (PGA Championship) and being voted PGA Tour player of the year.

The encore is never easy.

“I think the hardest part is going to be staying in the moment and recognizing that it’s a new year,” Thomas said as last year was ending. “It’s a new opportunity for great things, and I just need to continue to work hard.”

Spieth knows the feeling. He won five times in 2015, including the Masters and U.S. Open and close calls in the other two majors. He started the following year with an eight-shot victory at Kapalua, but then won only one more time the rest of the year.

So if Thomas wants any advice on how to handle the higher profile, he can always check with his longtime friend.

And he already has.

“I was able to — I hope — share just a couple of insights that maybe I wasn’t prepared for that could have helped me, not necessarily on the golf course but more in just blocking stuff out and staying focused,” Spieth said.

Spieth didn’t share details of their conversation, though he revealed some advice he took last year during a critical juncture in his season, if not his young career.

It came from an excerpt in Theodore Roosevelt’s “Citizenship in a Republic” speech delivered in Paris in 1910.

Spieth, who takes pride in being a good closer, still couldn’t shake the memory of losing a five-shot lead on the back nine of the Masters in 2016. He thought about it again during the final round of the British Open, where a three-shot lead in the final round turned into a one-shot deficit with five holes to play. He answered with three birdies and an eagle over the next four holes to capture the third leg of the career Grand Slam.

“The British Open, it just did wonders for me individually,” Spieth said. “And not only my view of myself, but my view on being the man in the arena. I’m the one that’s out there, that’s putting it on the line every single week. I’m going to fail and learn and I’m going to succeed, but I’m the one in the arena.

“I feel like I’m in a great place of who I am and what I’m doing going forward,” he added. “And starting 2018, I’m kind of ready for anything. I’m ready for failure, for success and everything in between.”

It starts at the Tournament of Champions on Thursday, where Ryan Armour — the oldest player in the field at 41 — hits the opening tee shot. The forecast calls for plenty of sunshine all week, plenty of possibilities all year.